The Jinnah Institute convened the first Ideas Conclave on the 20th and 21st of January 2015 with high ranking politicians, technocrats and industry experts present in the capital to discuss some of the country’s most pressing and intractable policy issues.The proceedings began with a speech by Sherry Rehman, President of the Jinnah Institute, who lamented the increasing “recoil from democracy” evident in younger Pakistanis. She also commended the growing capacity of civil society to articulate messages for change; although she cautioned that civil society is a partner for democracy and not its prime agent. 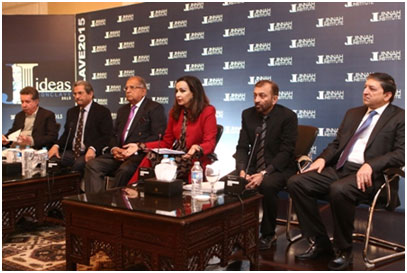 In his address on the first day of the Conclave, Minister for Commerce Khurram Dastgir highlighted the need for democratic government in Pakistan while emphasizing good governance at the local level. The minister also accepted the immediate necessity of local governments as the third tier of government and explained lapses in governance and civil service reform as the primary cause of crisis facing Pakistan.

The day’s final session, ‘New Media: Disrupting the Status Quo and Creating Noise’ was moderated by renowned journalist and anchor Nasim Zehra. In attendance and on the panel were the editor of Dawn.com Jahanzaib Haque, Shahzad Ahmed from Bytes For All, politician and activist Jibran Nasir and lawyer Yasser Latif Hamdani. Participants discussed the nuances of accountability on the internet, the limits of internet censorship, the power of social media in galvanizing and providing exposure to social movements and the increasingly ominous role of government surveillance.

The second day’s opening session, ‘National Security in Wartime: Is Pakistan prepared’ was opened by Jinnah Institute Honorary Vice President Ambassador Aziz Ahmad Khan, and former Foreign Secretary Ambassador Najmuddin Shaikh, DG-ISSRA Maj. General Noel Khokhar, television anchor Ejaz Haider and senior journalist Zahid Hussain taking on big-ticket issues currently plaguing the country. Participants agreed that Pakistan is confronted with an existential threat in the form of terrorism and that coordination with Afghanistan was necessary if Operation Zarb-e-Azb was to be successful. Questions concerning the ideological roots of terrorism, the fragile consensus post-Peshawar and the need to strengthen the police force were also raised.

A special session on the energy crisis was also held with former minister for Water and Power, Naveed Qamar, former cabinet secretary Nargis Sethi and Woodrow Wilson scholar Khurram Hussain. Concerns about energy transmission and distribution, political interference in the energy sector and the potential integration of ministries were raised. The subsequent session titled ‘Extremism and Radicalization’ was chaired by Nasim Zehra, and participants included Marvi Sirmed, Ali Dayan Hasan and Zahid Hussain. The panelists discussed a host of issues that ranged from the complicity of the national security establishment in facilitating extremism, class and income inequality vis-à-vis radicalization and the particularly damning role of sectarian extremism in Pakistan. 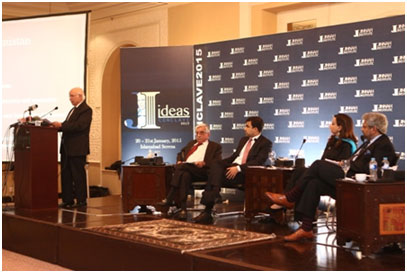 Ms. Rehman then moderated the last session titled ‘Navigating Change in South Asia,’ which featured Afghan Ambassador Janan Mosazai, former editor-in-chief of The Hindu Siddharth Varadarajan, former Foreign Secretary Najmuddin Shaikh and Zahid Hussain. Ms. Rehman emphasized that Pakistan had undergone transformative shifts in its security policy and had moved away from the notion of strategic depth, backed by multiparty political consensus to make peace with its neighbors. Panelists also discussed turbulence in the Indo-Pak track, Afghanistan’s decade of profound transformation, the urgent need for Indo-Pak cooperation on water security and how regional cooperation in South Asia was a pre-requisite for any lasting configuration of peace.

The Conclave’s closing address was delivered by Advisor to Prime Minister on National Security & Foreign Affairs, Sartaj Aziz who echoed the call for cooperation in the region while outlining the policy contours of the government’s South Asia policy. He urged regional players not to repeat mistakes from the past and encouraged them to work in tandem to maximize opportunities. Mr. Aziz also charted the pillars of Pakistan’s Afghanistan policy; underlining the need for bilateral political engagement, intensified security and counter terrorism cooperation, deeper trade and economic partnership, enhanced regional cooperation, non-use of territories against each other and supporting an Afghan led reconciliation process. Full text of statement here.

The Conclave was modeled on town-hall interactions that allow citizens to engage with public policy issues. This ensured that the ensuing Q&A sessions provided a lively display of public engagement and interaction that was supplemented with feed from Twitter being broadcast on screens next to the main stage.