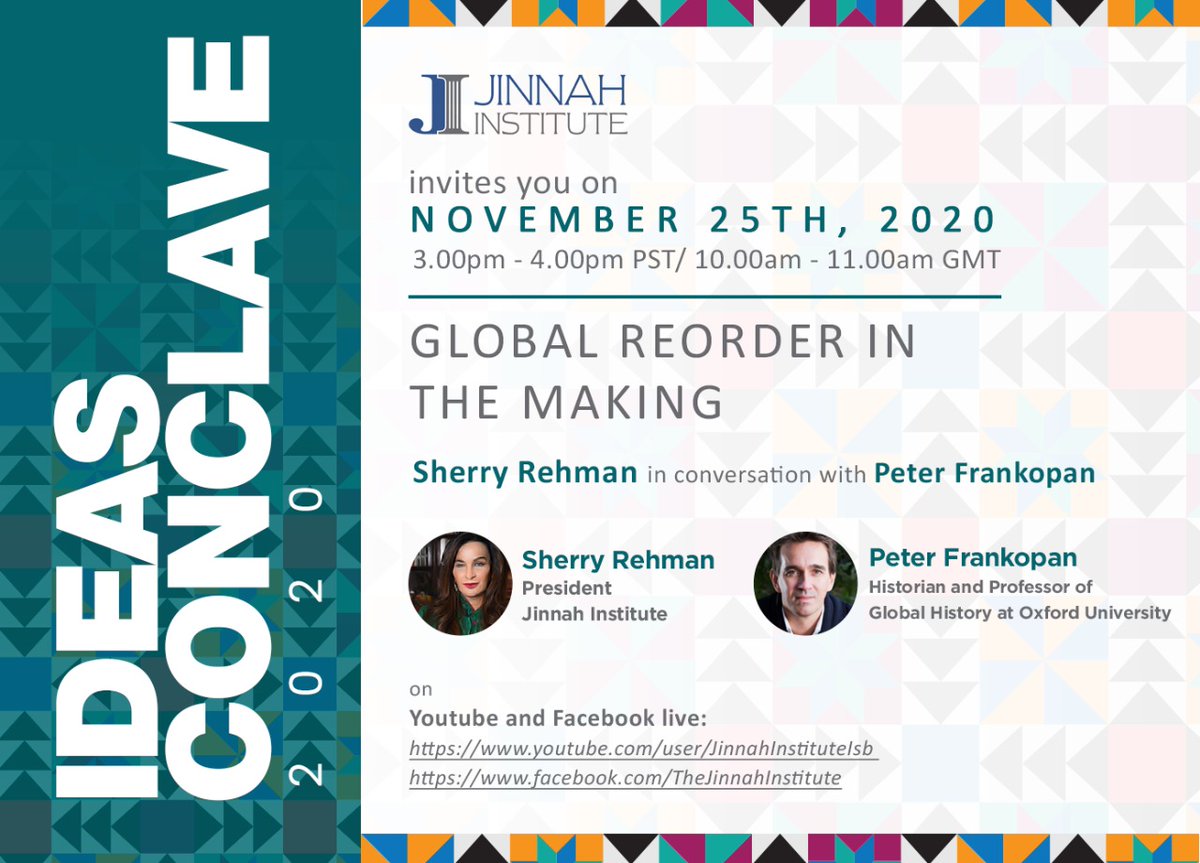 The Ideas Conclave 2020 kicked off with a conversation between Senator Sherry Rehman and notable historian Peter Frankopan. COVID has transformed the way we live, think, and interact with each other. Senator Sherry Rehman remarked how 2020 has been a year of terrible disruptions with the pandemic exposing new fault lines regarding how societies cope with crises. “Instead of fostering continental cooperation, the pandemic has reinforced new nationalisms as well as isolationist tendencies of key states around the world.”

Senator Rehman raised the pertinent question of whether the pandemic will further accelerate the trend of nations turning away from globalization. COVID has not really created new problems, but it has instead further made clear what problems already existed on a global scale, explained Dr. Frankopan. While the pandemic has had a dramatic impact in several ways, it has not been as bad from a lethality standpoint when compared to pandemics of the past. However, the real concern will be the long term social, economic, and political consequences that will come about as a result of this disease.

Senator Rehman looked to explore the potential changes in global connectivity brought about by the effects of the pandemic, and how the Belt-Road Initiative differed from the historical silk route. “Pakistan has had a connectivity dream and (has looked) to leverage its geopolitical position,” she stated. But volatility on the border between Pakistan and India, and China and India had led to an overly militarised region. As a result, the “larger dreams of cooperation and regional interlinkages have not been realised,” stated Senator Rehman.

The discussion shifted to the conflict rising between China and the Trump Administration in the US. On a question related to the ongoing trade war between the US and China and whether continued tensions could lead to a serious confrontation between the two rivals, Peter Frankopan highlighted the difficulty in attempting to predict future events. “Most of our history tends to be about difficult and touchy diplomatic relationships. And luckily, you know, those big wars are relatively far and few in between. But you can’t rule anything out.”

Dr Frankopan explained that it is important to separate the chatter and noise from what the real issues are, which can be a difficult task during the Trump era. The Cold War had seemed like an eternal conflict between two polar opposites, and yet the fall of the USSR led to the acrimony ending unceremoniously. There are legitimate reasons for both the sides to find a better working relationship. While it remains to be seen if there will be any changes with a Biden administration coming in, a lot of concerns surrounding China seem to be bipartisan in the domestic US context. However, Dr. Frankopan did express optimism about there being some kind of reset in the relationship between the two countries with a new President in the White House.

On the subject of climate change, and how it is one of the biggest trend lines to watch out for in South Asia, Senator Rehman posed a question on how this might derail growth and development in the region. China, at the moment, provides 45% of all new patents and funding into clean energy, stated Dr. Frankopan. China does this because it is a global leader, but also because it has an energy crisis of its own as it does not have much oil and gas reserves in its Western provinces. Similarly, Pakistan also faces an energy crisis which has been a hurdle in the way of economic growth. For Pakistan specifically, it is imperative that it come up with energy plan and invest more in clean energy sources considering the threat climate change poses. These challenges require long term investment and planning, and are by no means unique to Pakistan.