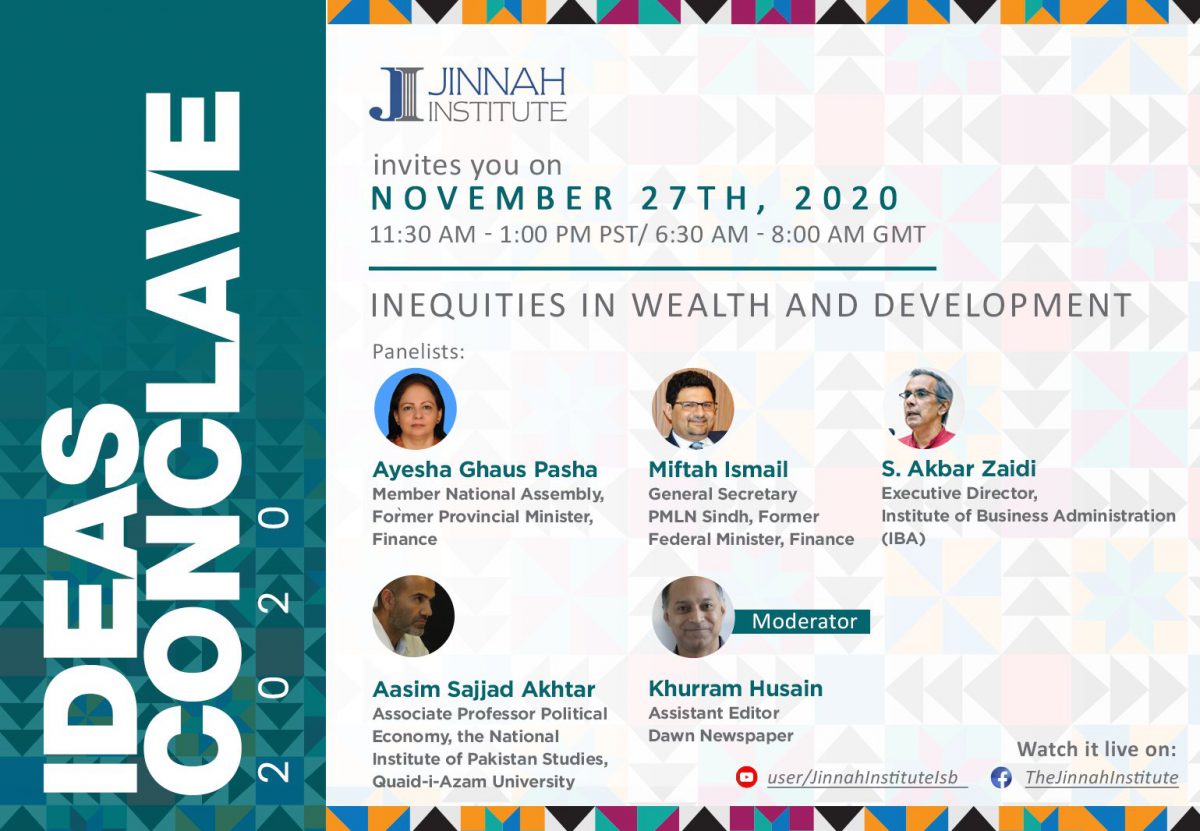 The third and final day of ‘Jinnah Institute’s Ideas Conclave 2020’ commenced with a conversation on ‘Inequities in Wealth and Development’ where experts discussed the current state of the economy in Pakistan, the impact of Covid-19, and what path of recovery should be adopted considering the rising levels of inequality. Speakers of the session included former Provincial Minister of Finance, Aisha Ghaus Pasha, General Secretary PMLN Sindh, Miftah Ismail, Executive Director IBA, S. Akbar Zaidi, and Associate Professor of Political Economy at QAU, Aasim Sajjad Akhtar. The session was moderated by Assistant Editor at Dawn Newspaper, Khurram Husain.

South Asia is home to one-third of the world’s poor population. Despite achieving substantial levels of growth, inequality levels have continued to rise in the region. Dr. Aisha Ghaus Pasha highlighted that there exists a strong correlation between reduction in inequality and reduction in poverty. She lamented the fact that government policies have been geared solely towards achieving growth while neglecting the rising levels of inequality. Dr. S. Akbar Zaidi pointed out that reducing poverty levels is a relatively easier task that can be achieved through income support programs such as BISP. However, addressing inequality requires undertaking structural reforms focused on wealth creation.

While traditionally it is understood that there is a trade-off between equity and efficiency, in Pakistan’s context, an increase in equity would perhaps result in an increase in efficiency as well, noted Dr. Miftah Ismail. If growth is pursued in a more inclusive manner and more attention is paid to small and medium enterprises, a reduction in inequality can be achieved. While structural changes to reduce inequality will require long term measures, there is a need to identify that the greatest contributors to inequality over the last twenty-four months have been inflation and food inflation.

Rising inequality has been a global trend. Dr. Aasim Sajjad Akhtar opined that this trend is a reflection of distinct political choices regarding the kind of economy leaders around the world have wanted to create; one that essentially controlled by big business interests. He further added that a narrative of imaginary growth and development has been sold to a mythical middle class, that in practice has continuously left out large segments of society. The rising populist impulse being witnessed globally is a response to the obscene levels of inequality that has come about by design

On the subject of the kind of economic model that would help us achieve more inclusive growth, Dr. Aisha Ghaus Pasha stressed that it is imperative to focus on more labour intensive areas of the economy, especially the agricultural sector. Additionally, instead of providing subsidies to the large corporate sector, the government should introduce policies that are more supportive of small and medium level enterprises. These measures, along with the formalising of the informal economic sector will go a long way in bringing about a more equitable growth model for Pakistan.