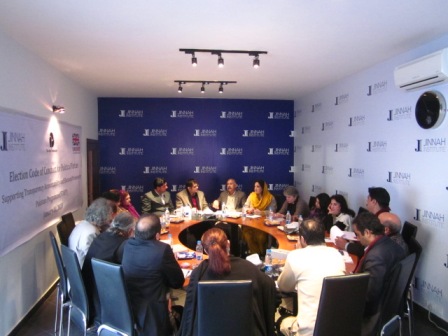 Implementation of Election Code of Conduct for Elections 2013 is the real challenge: Political Parties

January 10, 2013, ISLAMABAD – Welcoming the finalisation of the Election Code of Conduct, representatives of Pakistan’s top political parties called for its implementation in letter and spirit at a consultation organised by the Jinnah Institute in collaboration with the Asia Foundation on Thursday.

Anusha Rahman, a member of the National Assembly from the PMLN, shared key recommendations endorsed by the multi-party parliamentary committee to improve procedures, processes and tools for the implementation of the code. While the new code has empowered local ECP staff with magisterial powers for action on electoral complaints, a complete ban has been recommended on the use of banners and hoardings except those that meet the notified size requirements. Referring to the Supreme Court judgment, Rahman said her party wants zero expenditure during their election campaigns. She said that the parliamentary committee had recommended seven years imprisonment without bail for the display of weapons.

Bushra Gohar, central vice president of the ANP, demanded that redundant and repetitive provisions contained in the code mustbe eliminated. She further noted that there are already enough election laws covering many issues contained in the code, like the display of arms, the harassment of women, illegal hoardings, discrimination, and incitement to violence. The ECP must ensure the role of agencies is minimised to the best possible extent, she added. In order to curb electoral manipulation, the ban on the transfers and postings of officials around elections must be enforced, she said, also suggesting that the ECP must develop its own well-resourced and trained cadre at the local level.

To ease transport issues and overcome the constraints facing women in accessing polling stations, Yunus Ali Raza, the PTI’s Joint Secretary Islamabad, recommended that the idea of mobile polling stations should be explored and introduced. He also suggested that a 48-hour period for the strict scrutiny of nomination papers is unrealistic. Adequate time should be given to properly assess nominations.

Farrukh Khan, president of the PMLQ’s Women Wing, opined that parties facing financial constraints must be given adequate airtime on the media. She underlined the need for women police to ensure security of women at polling stations.

Hasan Nasir, vice president of the AWP, said that any attempt at electoral reform will remain meaningless unless the cause of the problem is attacked. He said the psychology behind party preferences for elections is the real cause, and is a major impediment to providing a level playing field.

Sarwar Bari, executive director of the Pattan Development Organisation, said that unless the judicial mindset is changed, there will not be any meaningful change in the way electoral disputes are settled.  We should not wait for anyone to lodge a complaint, Bari said, but instead the courts themselves should take notice of any violation of the election code of conduct.

Raza Rumi, Director Jinnah Institute concluded the discussion by saying that the civil society and media had to play a vital role in the forthcoming elections by reminding the political parties that they had to take charge of the electoral conduct, ensure women’s participation for a peaceful transfer of power after the elections.