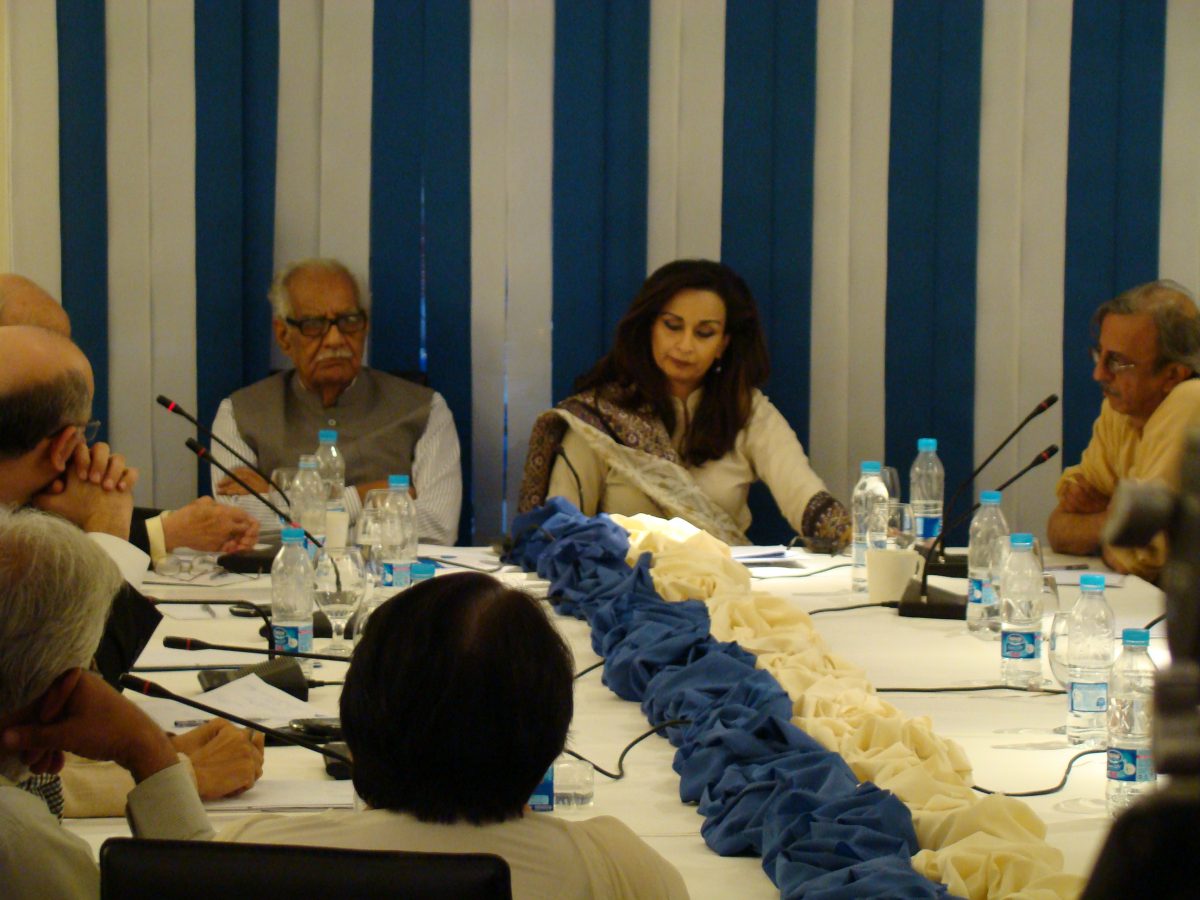 21st March, 2011: Jinnah Institute organized a roundtable on peaceful bilateral relations between India and Pakistan on 21 March, 2011. The event was attended by a delegation of Indian parliamentarians, journalists and civil society actors. They discussed strategies for peace, with the aim of laying down a sustainable and inclusive framework for preventing crisis, increasing regional peace and economic exchange and building greater trust and cooperation. Jinnah Institute has been leading efforts in Indo-Pak Track II diplomacy in Pakistan and this event provided an avenue to further engage participants from both sides.

Sherry Rehman, President of the Jinnah Institute, stressed the need for voices from both sides of the border to engage in a sustained dialogue to mitigate conflict. She urged the delegation to focus on key fundamentals for change so that governments of both nations could be convinced to push for peace. Rehman pointed out the necessity to initiate a dialogue that addressed the very different challenges faced on both sides of the border and stated that the political left in India and Pakistan had much more in common than the conservative right. Mr. Kuldip Nayyar, veteran journalist and former member of parliament, pointed out that war is no more a solution to the problems of India and Pakistan and any dialogue undertaken must move in that direction.

It was observed by some participants that terrorism was a major conflict driver in the region, which had created a shift in the bilateral relationship between both countries and that the composite dialogue must be resumed. It was pointed out that there is need to create effective conflict mitigation solutions that do away with military escalation as an option, such as a no-war pact. However, the decision makers of strategic security on both sides were seen to carry an unchanged mindset since 63 years and little alteration could be expected in their established conflict paradigms. It was observed that while the threat of nuclear arms may prevent war from breaking out, proxy wars in Afghanistan or Balochistan were likely to continue.

Some participants called for prioritization of security issues, where conflicts like Siachin and Sir Creek could be resolved before others. The water issue was also identified as a potential conflict escalator. It was also felt that security policy needs to become more reflective of people’s desires, just as it was important for more people to be educated about security policy. Some participants argued that both countries lacked significant ‘peace constituencies’ that could come to bear upon strategic security and pursue the ‘peace agenda’ more aggressively.

It was also argued that ‘war constituencies’ on either side created threat perceptions, which hold that India and Pakistan are ready for war. Such threat perceptions could only be overcome if the benefits of peace outweighed the benefits of war. It was observed that the establishment on either side acted out of policy compulsions and that despite increasing calls for peace, the ‘give and take’ between both countries to create peace has to be more meaningful.

It was recognized that a change in the current narrative expressed in the media was necessary by de-legitimizing and actively discouraging inflammatory talk on media platforms on both sides. This requires engaging mainstream media on specific Indo-Pak issues. It was felt that there was more work to be done in India in this respect. Some participants commented on the role of media in India after the Mumbai attacks, stating that “Pakistan bashing” ensures electoral success in India, although “India bashing” does not help win elections in Pakistan anymore. It was highlighted that media houses are run by corporate interests that respond to viewer ratings and media channels seek popularity through hard-line stances.

It was suggested that stronger people-to-people networks could be made possible through the use of social media and the internet. All participants agreed on the role of people-to-people contacts in mitigating conflict, reversing threat perceptions and pushing for peace together. By engaging the younger population of both countries a useful alternative dialogue can also be established, which reflects a separate set of priorities and is less troubled by the past. The participants agreed that easing visa restrictions was key to ensuring greater contact between people.

Participants also highlighted human development indicators from both countries and how resources should be diverted from high military expenditure to investing in education and poverty alleviation. If India assumed the role of ‘Big Brother’ and decreased defense spending, Pakistan would follow suit. Both governments were urged to pay greater attention to human rights violations inside their borders. Some participants suggested that grass roots mobilization among civil society networks across the border was one way to push for peace. This was a move away from the traditional diplomacy which was seen to produce few results.

Greater economic cooperation between both countries was also stressed. It was observed that the trade potential between India and Pakistan and by extension South and Central Asia was very high and several steps had to be taken to realize that potential. The Trans-Afghanistan Pipeline (TAPI) was mentioned as a case in point. Another suggestion was the economic cooperation model utilized in Europe in post-World War II.