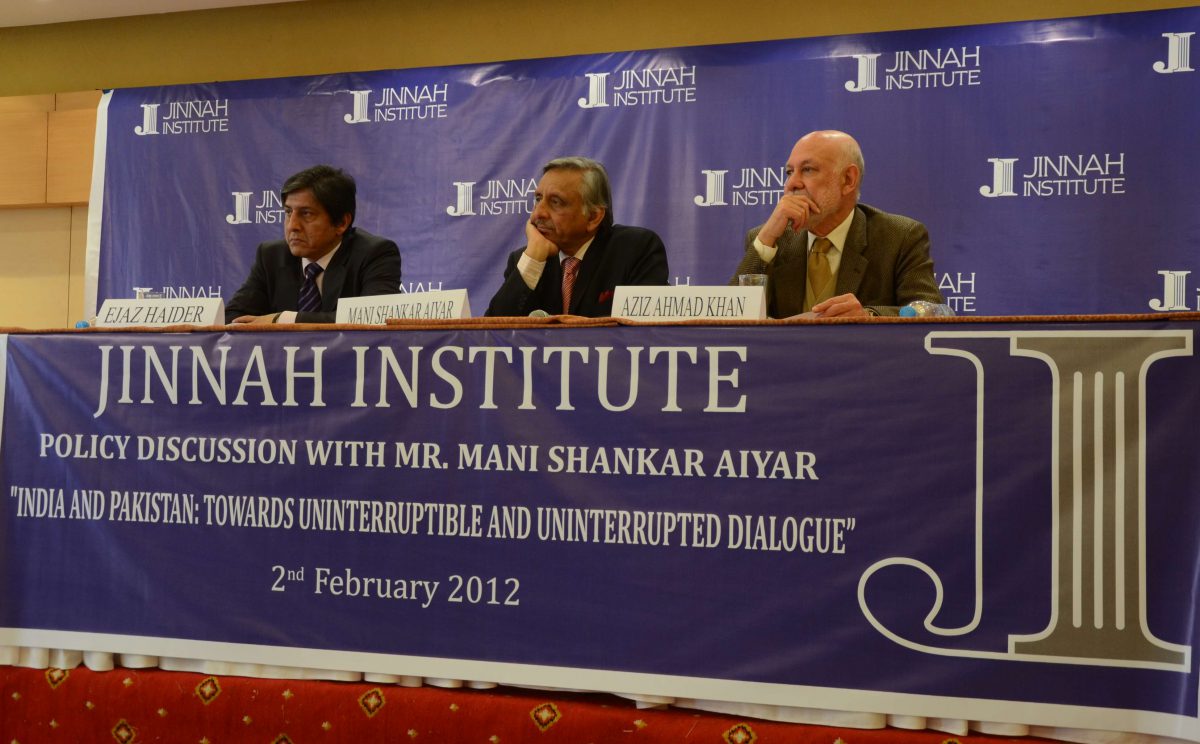 “History may have divided us, but geography binds us, and a shared inheritance holds as much potential to keep India and Pakistan apart as it has in keeping them apart,” Mr. Mani Shankar Aiyar, Member of Rajya Sabha and former Indian Union Minister, said at the Islamabad Club on Thursday. Mr. Aiyar was speaking at a policy discussion seminar titled ‘India and Pakistan: Retrospect and Prospect?’ organised by the Jinnah Institute. Mr. Aiyar asserted that it is not communal animosity, but national hostility, that keeps India and Pakistan apart. Despite this, he appreciated efforts made by the present government of Pakistan towards normalizing Indo-Pakistan trade, and hoped that both countries could realistically become each other’s most favoured nation.

Mr. Aiyar, who was a Minister in the Union Cabinet for Petroleum and Natural Gas (2004-2006), Youth Affairs and Sports (2006-2008) and for Development of the Northern Region (2006-2009), has served in the Indian Foreign Service for 26 years. He has also served as Consul General of India in Karachi (1978-1982). He is also credited with coining the now officially used term ‘uninterrupted and uninterruptible dialogue process’.

“Pakistan is a modern nation-state, now under serious threat from armed religious fanatics, but it is not about to succumb as a society or as a state to elements who, even in a moderate garb, have rarely managed to win more than a tiny handful of seats in any election”, Mani Shankar Aiyar posited. He said that any strategy built on the presumption that Pakistan cannot survive is misconceived, misplaced, and dangerously misleading. Mr. Aiyar also regretted the widely accepted view in Indian circles that Pakistan is a ‘failed’ state or ‘failing’ state, and said that such views needed to be countered.

“No state has suffered as much from terrorism as Pakistan itself”, Mr. Aiyar said. “I do believe that a joint strategy to counter terrorism will enable both India and Pakistan to overcome what is, in effect , a joint threat to our people”, he said.  Mr. Aiyar concluded by saying, “let us give peace a chance; we have nothing to lose but our chains, and we have a world to gain”.

The  talk was preceded by opening remarks by former Ambassador Aziz Ahmed Khan, Honorary Vice President Jinnah Institute, who said that Indo-Pakistan relations have experienced many highs and lows, but a leap of faith is needed in order to find a solution. Mr. Ejaz Haider, Executive Director of Jinnah Institute, said that modern experiences are crucial in forming individual identities and urged India to recognize Pakistan as a reality that will not go away.

During the question and answer session, members of the audience asked what effect opposing mindsets had on the India Pakistan peace process. Mr. Aiyar felt that mindsets can change, that there was symbiotic relationship between mindsets and ground realities and that the narrative of hate must definitely be countered. Regarding a question on the Joint Anti-Terror mechanism established in 1997 by India and Pakistan, he said and that it should be implemented in letter and spirit.

Mani Shankar Aiyar lectured the following day at Quaid-e-Azam University before a crowd of students and faculty members from the Department of Defence and Strategic Studies on ‘Prospects of India Pakistan Cooperation in Global Nuclear Disarmament’.

Mr. Aiyar is the second speaker from JI’s ongoing Distinguished Speaker Series, as part of its Indo-Pak Track-II called the Chaophraya Dialogue. Previously, Dr. Shashi Tharoor, (Member of Lok Sabha and former Indian Minister of State for External Affairs) has lectured at the Islamabad Club under the aegis of the Distinguished Speaker Series in January 2012. Future invitees include Prof. Najib Jung (Vice Chancellor Jamia Millia Islamia Delhi and a former IAS officer).