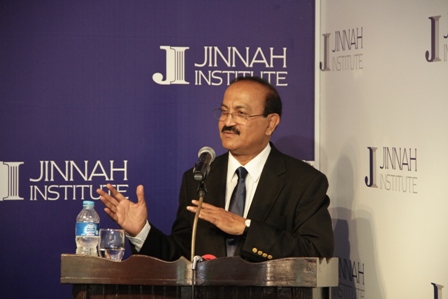 Islamabad – August 29, 2013: The costs of abandoning a constructive Indo-Pak dialogue are perilously high – this was the assertion made by Mr. Raj Chengappa, award-winning Indian journalist and current Editor-in-Chief of India’s Tribune Group of Newspapers, who was discussing the neighbouring countries’ bilateral relations at the Jinnah Institute on Thursday.

Addressing guests at the fifth round of Jinnah Institute’s Distinguished Speaker Series (DSS) held in Islamabad and attended by a large audience of former ambassadors, former military officers and civil society, Mr. Chengappa argued that both India and Pakistan had become enveloped in their own narratives, and that it was high-time that these were changed. Discussing the similarities between the two countries, Mr. Chengappa pointed out that both Pakistan and India hosted massive youth bulges, exploding middle-classes and sizeable markets. He added that the collective needs of both South Asian countries were such that their economies now required 10 percent growth rates, and that nothing less would suffice: “Equitable growth is not possible without peace,” he stated.

The Distinguished Speaker Series is a core part of Jinnah Institute’s Indo-Pak track II diplomacy initiative. In the past the DSS initiative has greatly facilitated and enabled the exchange of high profile public speakers including parliamentarians, academics and policy experts between the two neighbouring countries. It is aimed at fostering greater mutual understanding of bilateral issues and creating stakes in peacebuilding through people-to-people contacts. Thursday’s lecture organized by the Jinnah Institute titled, “Indo-Pak Relations: New Beginnings, Old Endings?” saw the Indian journalist speak at length about his experience interacting with officials from both sides, and his own views on the potential for constructive engagement between the two countries. Mr Chengappa has also formerly served as Managing Editor for India Today, and is the author of the best-selling book on India’s nuclear programme titled, “Weapons of Peace: The Secret Story of India’s quest to be a Nuclear Power.”

Commending Pakistan’s transition to democracy, he observed that Prime Minister Nawaz Sharif seemed poised to confront the country’s many domestic challenges. While recounting the chequered trajectory of Indo-Pak relations, Mr. Chengappa concluded with with cautious optimism: “India and Pakistan have moved from fighting, to talking about fighting, to fighting about talking. However, it’s not as if progress has not been made. I see the glass as half full.”

The talk was followed by a lively question and answers session. Salman Zaidi, Deputy Director of Jinnah Institute thanked the Distinguished Speaker and commented on the need for “creative rethinking” by stakeholders on both sides that assists dialogue and reconciliation.