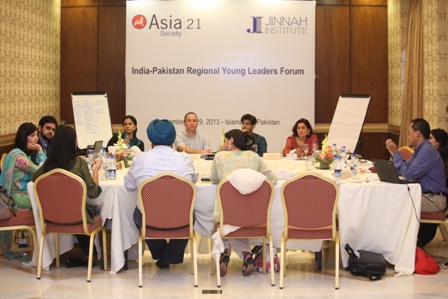 Islamabad – September 29, 2013: A two day conference of the India-Pakistan Regional Young Leaders Forum (IPRYLF) concluded with a call for mentorship in cultivating a new generation of South Asian leaders, and prioritizing peace initiatives across India and Pakistan.

The forum was divided into six thematic sessions, which focused on Leadership, Social Media, Opportunities and Challenges in the Indo-Pak relationship, Violence against Women and Empowering Civil Society. The panels explored new areas of cooperation between Indian and Pakistan, especially with regard to how young leaders can inject fresh ideas and energy in mitigating the political impasse. The panellists comprised of eleven Pakistani and Indian young leaders, selected through a rigorous process over the last year and belonging to a variety of professional backgrounds.

The panel discussion on leadership produced a rigorous debate, as the panellists sought to identify desirable attributes for South Asian leaders. Panellists acknowledged that political leadership in South Asia tended to be dynastic and there were no genuine grooming mechanisms. Constraints within the system became inhibitors for new leaders to emerge, but it was agreed that the realm of politics need not be seen as the “endgame of leadership”. Reservations were expressed about the impact social media had on politics, but it was also viewed as a catalyst for political change.

With regard to challenges in the bilateral relationship, the panellists spoke at length about greater opportunities for cooperation and people-to-people contact. It was recommended that cooperation in sectors like healthcare, education, gender rights and cultural exchange is undertaken. The efforts made through Track 2 diplomacy were appreciated, as well as the work of NGOs, trade bodies and educational institutions that have facilitated cross border collaboration and exchange. However, it was recognized that cross border collaborations were often constrained by a restrictive visa regime as well as the nature of the wider bilateral dynamic.

Based on their discussions, the panellists conceived a cross-border project aimed at creating meaningful peace messages for the public in both countries and maximizing their dissemination. The group agreed to create multimedia products over the next one year, aimed at resetting political narratives through a creative media strategy.