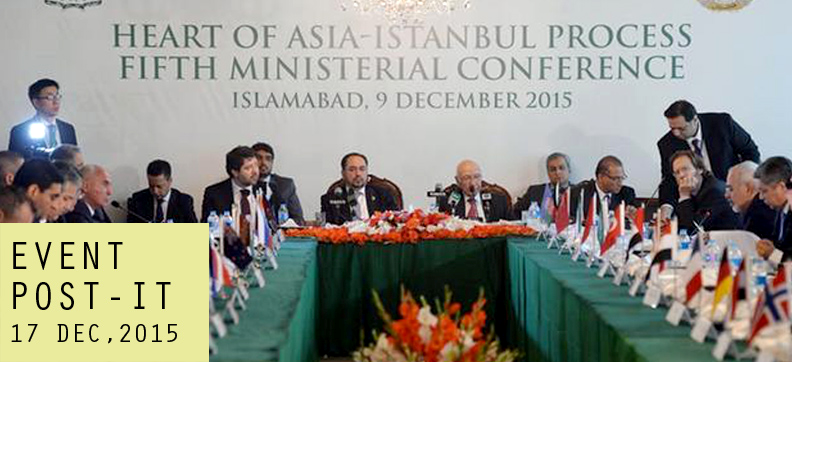 The Road to 2016: Negotiating Diplomacy and Deadlock with India and Afghanistan

Policy experts took stock of recent political transformations in Pakistan’s neighbourhood, beginning with what was described as ‘the tremendous re-set opportunity’ with India, offered by an unprecedented bout of diplomatic activity in the first week of December. It was agreed that the meeting between the two NSAs in Bangkok helped Pakistan sidestep the need to meet the Hurriyat leadership. Prime Minister Modi should build on this opportunity to turn a fresh page on his engagement with Pakistan, and EAM SushmaSwaraj’s call for ‘uninterrupted dialogue’ signaled a welcome and positive change in New Delhi’s approach towards bilateral engagement. Several participants suggested that the next meeting between the two Foreign Secretaries ought to take place in Islamabad, so as not to trigger the sensitive issue of meeting the Hurriyat, and because the last cancelled meeting between the two officials had been scheduled to take place in Pakistan.

On the subject of what had compelled a change in Indian thinking on Pakistan, it was seen that while Prime Minister Modi enjoyed a favourable reputation in the West, his own image in South Asia, along with India’s relations with Nepal, Sri Lanka and the Maldives, had been floundering in recent months. A détente with Islamabad could go a long way in fixing his regional image, and therein India’s standing in the neighbourhood. Indian civil society reacting to the local stresses of Hindutva nationalism, furthermore, had compelled New Delhi to rethink its stance on regional engagement. In Pakistan, Prime Minister Nawaz Sharif’s consistent policy of outreach to India was praised, and observers agreed that both the civilian and military leaderships desired healthy engagement with New Delhi. This was largely because a peaceful neighbourhood was important to create the space to fight internal enemies, and to capitalise on economic development and security, which in turn was key for military strength. It was felt that for the past one-and-a-half years, India itself had pursued a policy that had sabotaged chances for peace, i.e. internationally cold-shouldering Pakistan and making talks contingent upon progress against terrorism. This policy was no longer tenable. While participants agreed that the Kashmir issue should be taken up by the backchannel, it was also important to ‘accident-proof’ the relationship, and prevent the repeat of a Mumbai-like incident from derailing bilateral progress.

Dialogue, in turn, could open avenues for trade and transit for Indian and Afghan trucks through Pakistan. In this regard it was suggested that Pakistan stop viewing transit trade and economic cooperation with India as a concession to New Delhi, and instead start seeing land access as valuable leverage that, if granted, would increase Indian stakes in a healthy and progressive bilateral relationship with Islamabad.

On the issue of Afghanistan, participants agreed that President Ashraf Ghani’s visit to Islamabad to attend the Heart of Asia conference offered Islamabad and Kabul yet another opportunity to re-set the relationship, and learn from the hard lessons of a tense summer. It was felt that the resignation of NDS chief Rahmatullah Nabil had been in the works for a while, and that this had not been precipitated by President Ghani’s remarks at the Heart of Asia summit. It was generally noted that an intra-Taliban dialogue would have to precede any intra-Afghan dialogue, particularly after a violent summer of infighting within Taliban ranks. In this regard it was suggested that China might be able to play a constructive role, since it was one of the few powers in the region which had no political baggage when it came to the Taliban. On the subject of intra-Taliban dialogue, one participant asked whether a divided franchise might be easier to defeat than a united organisation.

The official Pak-Afghan relationship still faced many challenges, however, including a massive trust deficit that seemed to have been re-enforced by the untimely announcement of Mullah Omar’s death in July. Going forward, it was important that both sides make a concerted effort to address this trust deficit; positive public messaging was cited as one possible avenue for repairing damaged narratives about Pakistan in Afghanistan. The virtual non-recognition of the Durand Line as the international border by Afghanistan continued to undercut attempts by peacemakers to stabilise the relationship, and participants agreed that formalising or ‘hardening’ this border would address many domestic and regional security concerns.

Participants also questioned the role of ‘spoilers’ in Afghanistan, and noted that as long as individual groups continued to benefit from the Afghan war economy, there would be little consensus on the issue of reconciliation and bringing fighting to an end.