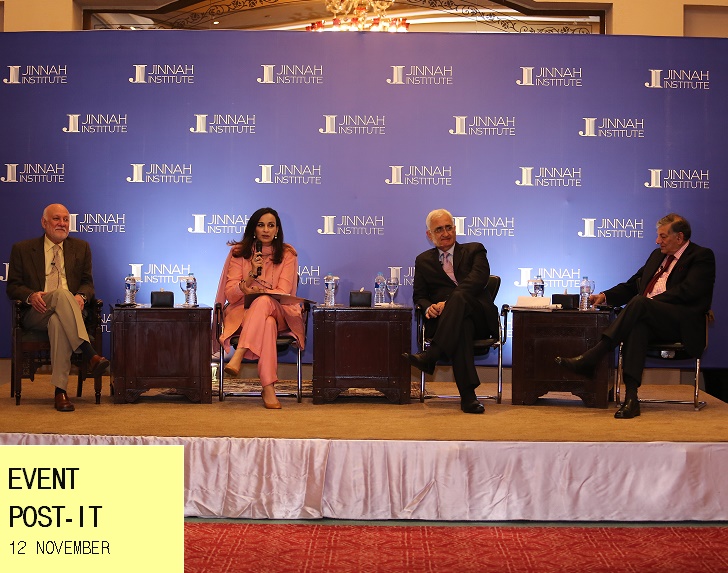 Speaking on the occasion, Mr. Khurshid maintained that the Indian establishment had done precious little in recent months to fortify Pakistan’s endeavors for peace in South Asia. He was of the opinion that it was courageous, brave and far-sighted of Prime Minister Nawaz Sharif to attend Prime Minister Narendra Modi’s oath-taking ceremony in New Delhi in May 2013. However, the BJP led-government in India had failed to adequately reciprocate Islamabad’s peace overtures. Since 1947 the world had found solutions to several intractable disputes and conflicts, while the India-Pakistan confrontation remained largely unchanged. Mr. Khurshid was of the opinion that Prime Minister Modi is still learning how to be a statesman, and if India wished to move forward in its dialogue with Pakistan, it would have to take care not to unsettle the democratic political dispensation in Islamabad. A stable and successful Pakistan was in India’s interest, and vice-versa: ‘India has a stake in the success of Pakistan far greater than the usefulness of a counterargument against its initial conception,’ Mr. Khurshid affirmed.

While terrorism against any country was completely unacceptable, Pakistan itself had not been spared from this scourge. Mr. Khurshid also praised Pakistan’s fight against terrorism, and acknowledged Pakistan’s role in fighting a difficult war in its tribal areas. In India, meanwhile, the ideological resistance of the BJP to the ‘Idea of India’ has put the entire justice project in cold storage, to await the return of secular politics. Mr. Khurshid proceeded to note that it was curious that the most seeming breakthroughs between India and Pakistan took place when the Pakistan Army was in direct control of the government machinery in Islamabad. That notwithstanding, Prime Minister Sharif was the first major non-military leader to extend his hand of friendship to India on multiple occasions: ‘Let me right away publicly record my considered opinion that your present Prime Minister Nawaz Sharif is genuinely committed to peace with India and has more than once put himself in considerable discomfort to find an opening beyond pious incantations’.

Speaking on the occasion, Jinnah Institute President Senator Sherry Rehman noted that there were as many roads to peace and stability as there were to war and conflict in South Asia. Senator Rehman reiterated that Pakistan was presently fighting one of the biggest inland wars ever fought, with little international help. On the foreign policy front, it still remained to be seen whether New Delhi had a clear policy on Pakistan. In contrast, political parties across-the-board in Islamabad were unequivocal and on the same page when it came to making peace with India. She warned, however, that the strong public consensus in Pakistan for improved relations with India was breaking down due to threats of conditionality, and stark messaging, from New Delhi.

Senator Rehman maintained that Pakistan was a multi-layered and inclusive society, and that Jinnah Institute had worked hard to push for a pro-minority rights agenda in the country. Track 2 exchanges between India and Pakistan were critical because of the cognitive disconnect between the two sides. Simultaneously, a new generation of youngsters in both countries was busy constructing new identities and ideas of themselves and their neighbour. She further asserted that there were no fireworks in Pakistan following November’s Bihar election; indeed Pakistan was facing and tackling its own slate of difficult internal challenges.

Also speaking on the panel, former Foreign Secretary Riaz Khokhar was of the opinion that the past year had seen a number of setbacks for India-Pakistan relations. He noted that trade between the two sides would be favourable for both sides, but it was an unfortunate reality that economic and regional connectivity in South Asia continued to be held hostage to political stalemate. Amb. Aziz Ahmad Khan, meanwhile, felt that the BJP government in New Delhi had already wasted too much time, and must now seriously move forward on all bilateral issues with Pakistan including regional connectivity.

During a lively and interactive Q&A session with the audience, Mr. Khurshid suggested that thought leaders and opinion makers from both countries should write in each other’s newspapers more often. He was also of the opinion that divided families from either side of the border should be allowed multiple entry visas to facilitate travel. ‘The possibilities of cooperative growth between the two countries can be judged by the potential of gas pipelines from Iran and Central Asia across Pakistan to Indian destinations,’ he asserted, adding that such endeavors would have a multiplier effect within the realm of bilateral cooperation. Underlying these projects was the reality of the unlocked interdependence of India and Pakistan.

Mr. Khurshid also stressed that Pakistan should not view India as just a Hindu country. By 2020, India would have a larger Muslim population than either Indonesia or Pakistan, and India was proud of its secular ethos. He also acknowledged and praised Prime Minister Nawaz Sharif’s remarks to the Hindus of Pakistan on the occasion of Diwali, and referenced Quaid-i-Azam Muhammad Ali Jinnah’s speech on secularism.