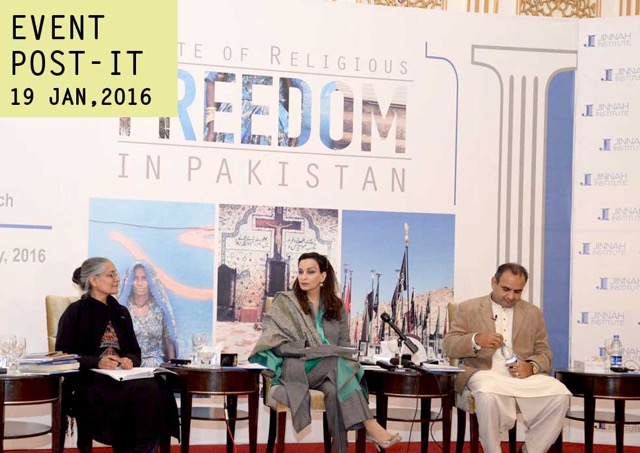 Discrimination and violence against minorities and vulnerable communities in Pakistan poses a grave threat to society, and a change in mindset is needed to ensure that the life, dignity and rights of minorities are protected. This was the fundamental assertion made at the launch of Jinnah Institute’s latest report, ‘State of Religious Freedom in Pakistan” and the screening of its documentary “Strangers in Their Own Land” aired at the Marriott Hotel, Islamabad on Tuesday.

The report, which is the second report in a series on religious freedom, examines the state of Muslim and non-Muslim minorities in Pakistan through quantitative and qualitative research based on reported incidents on discrimination and violence, along with interviews and focused group discussion with vulnerable communities across Pakistan.

Speaking on the occasion, Jinnah Institute President Senator Sherry Rehman noted that while discrimination against minorities is part of a larger regional trend across South Asia, this was no justification for the distressing state of religious freedom in Pakistan. She called on all stakeholders to recognize the real and present danger posed by prejudice, bigotry and exclusionary practices towards the state’s vulnerable citizens. She emphasized the need of incorporating Quaid-e-Azam’s August 11 speech in curricula to ensure that future generations uphold the principles of a tolerant and plural Pakistan.  As such Senator Rehman welcomed Jinnah Institute’s report, and painstaking research that included over 100 interviews, as an important step in the country’s quest for a tolerant and inclusive society.

Ali Dayan Hasan, who supervised and edited the report, noted that the state’s response to discrimination has become more nuanced in recent years. He noted that it was important for policy think-tanks in Pakistan to speak to minority rights issues in indigenous voices. Executive Director Christian Studies Centre, Jennifer Jag Jiwan took the opinion that bigotry, prejudice and bias cultivated the space for discrimination against marginalized groups. Religion is just one of several vectors responsible for discrimination in Pakistan. It is the foremost responsibility of any state to protect its citizens and not discriminate when it comes to different groups.

Ramesh Kumar Vankvani, MNA Pakistan Muslim League-N (PML-N), noted that the Supreme Court in its seminal June 2014 judgment has given a roadmap to the government for ensuring that the rights of minorities in Pakistan are upheld according to the Constitution. He lamented that despite the passing of a year and a half, the SC judgement had yet to be implemented in its entirety. He highlighted that curricula reform was also essential to cultivate societal change.

Human rights advocate Tahira Abdullah praised the report as a significant contribution to the debate on minority rights. She urged the government to convene an inter-provincial meeting of education ministers to ensure that hate material is expediently removed from curricula across Pakistan.

The report notes that recent years have witnessed an escalation in the persecution of minority communities in Pakistan. Faith-based violence and discrimination against non-Muslims is only half the story. Over time, extremists have also targeted Muslims from the minority sects of Islam. During the period, 2012-2014 at least 351 incidents of faith-based violence were reported across Pakistan. 43 attacks of varying intensity targeted the Christian community; seven churches were damaged; and 14 people were charged with blasphemy. 39 Ahmadis lost their lives in faith-based killings; the highest number of targeted killings were carried out in Sindh and Punjab. Little improvement was noticed in the socio-cultural attitudes of majority Muslim sects towards Ahmadis in Pakistan. Mass desecration of the Ahmadi graveyards was also reported.

Forced marriages, abductions and rape of Hindu girls were the overriding concerns of the Hindu community of Pakistan.  In 2015 alone, at least ten incidents of forced conversion, one case of rape and abduction, and two cases of desecration of worship places were reported. Shia Muslims continue to face some of the gravest consequences of religious intolerance in Pakistan. During 2012-2015, 23 attacks on the Imambargahs and 203 targeted killings took place. In addition, 1304 lives were lost in bomb blasts.

Until the launch of the National Action Plan (NAP) in December 2014, there was no high-level policy by the state to tackle the menace of faith-based violence and discrimination, even now progress on safeguarding minority groups remains uneven. Civil society, human rights advocates and sections of the media have been highlighting faith-based violence; and there were some gains made too. For example, the Supreme Court delivered a landmark judgment in 2014 on minority rights, and a young Christian Rimsha Masih was acquitted of blasphemy in 2013. Similarly, the National Commission for Human Rights has been activated with a retired judge as its head, however its powers and remit remain limited.

The report highlights the following recommendations, among others, to improve the status of minorities in Pakistan:

1.   A parliamentary committee should undertake a review of constitutional provisions that spur discrimination against minority groups including the oaths administered to the office of high level officials of the state.

2.    The National Commission on Minorities should be given authority to take suo motu notice of discrimination and violence against minorities, with the ability to pursue public interest litigation to protect the fundamental freedoms enshrined in the Constitution.

3.     The implementation on the June 2014 Supreme Court judgement should be carried out in its entirety and the progress of provinces monitored diligently.

4.     Full implementation of job quotas for minorities and protection of businesses owned by non-Muslim groups.

5.      Hate speech and hate campaigns need to be curbed by further strengthening existing legislation and policies.

6.       Curriculum reform through inclusion of messages of religious tolerance, and shunning of violent methods against non-Muslims is urgently required in support of the Supreme Court ruling.

7.       Intensive training of police forces across all provinces to ensure that they are equipped to deal with faith based violence in their areas with sensitivity.