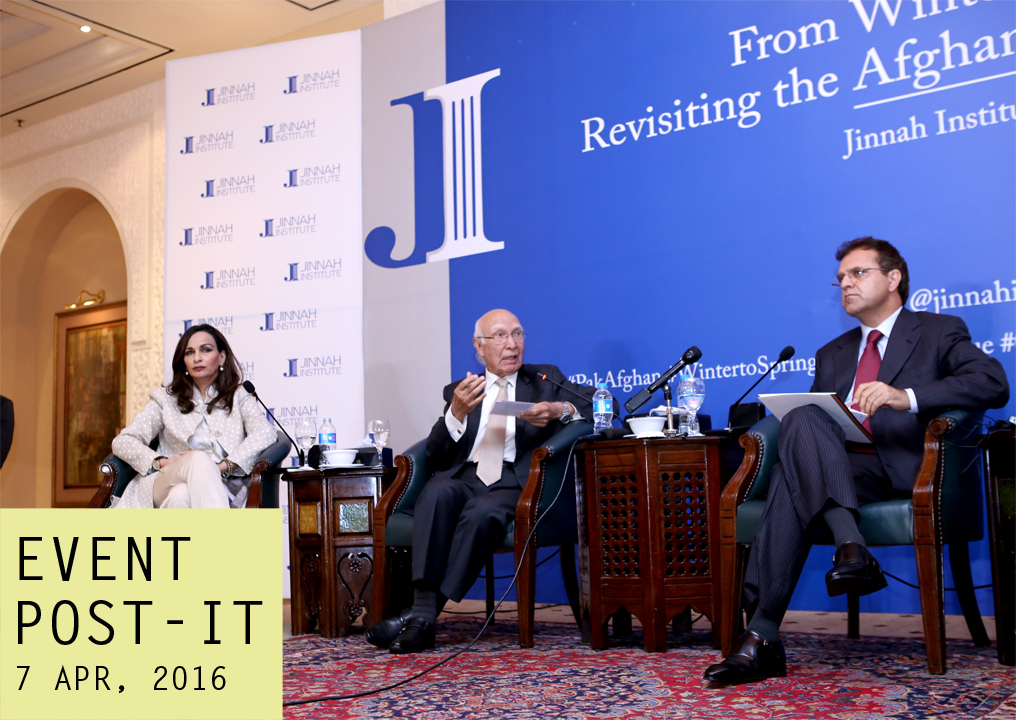 On 07/04/2016, Jinnah Institute hosted a panel discussion ​titled ​’​From Winter to Spring: Revisiting the Afghan Question’​  as part of its mandate ​as a public policy think-tank ​to bridge the gap between citizens and state.  ​The discussion, which featured Advisor to the Prime Minister on Foreign Affairs Sartaj Aziz, Afghan Ambassador to Pakistan Dr. Omar Zakhilwal and JI Honourary Vice President Aziz Ahmad Khan as panelists​, was chaired by Jinnah Institute President Senator Sherry Rehman.​

In his keynote address, the Advisor on Foreign Affairs stressed that no one can dictate terms to either the Afghan government or the Afghan Taliban, nor can arbitrary timelines, deadlines or conditionalities be attached to the reconciliation process. He further added that the focus of regional stakeholders should be on facilitating an inclusive reconciliation process in Afghanistan. He noted that the Quadrilateral Coordination Group (QCG) would have to collectively decide how to deal with elements refusing to join the peace process. He added that the next QCG meeting, however, has not been scheduled thus far. Mr. Aziz emphasized Pakistan’s continual consultative role in the Afghan reconciliation process under the principle of shared responsibility. Observing that over the past 15 years, an exclusively military approach had not worked in Afghanistan, he said that it was important to keep the reconicliation process on track and prevent attempts by spoilers to derail it.

Mr. Aziz said that Pakistan deeply felt the pain visited on Afghans owing to continuing violence in their country as Pakistan itself has also been a victim of brutal terrorism, citing attacks in Charsadda and Lahore as recent examples. Pakistan is, therefore, committed to the idea that one of the key goals of the Afghan reconciliation process be reduction, and ultimate cessation, of violence. He added that both governments were working on SOPs for better border management to prevent movement of militants across both sides.

Jinnah Institute President Senator Sherry Rehman appreciated President Ashraf Ghani’s role as an advocate of regional stability and change. She added that it was important to strive for an inclusive, Afghan-led peace process given recent Taliban battlefield successes. A negotiated settlement, she noted, was in the best interest of Afghanistan as well as regional players. Senator Rehman cautioned, however, that there were limits to Pakistani state power in leading this conversation. Both Afghanistan and Pakistan needed each other for trade, transit and to combat terrorism. But Pakistan has been put in a difficult position: it is fighting one of the largest inland war against terrorism and the situation is made all the more difficult by a long porous border.

Afghan Ambassador to Pakistan, Dr. Omar Zakhilwal, was of the opinion that it was important to build an environment of trust given that the main hurdle to peace in the region was the Afghan-Pakistan trust deficit. Taking note of the nature of shared challenges facing both countries, he agreed that it was important for both sides to talk to each other, and not at each other. He said his mission in Islamabad was to change mindsets and improving public perceptions. Without peace in Afghanistan, there could be no peace in Pakistan. The Afghan envoy acknowledged that Pakistan too had paid a high price for regional conflict. He estimated that Pakistan loses $70-80 billion annually due to instability in Afghanistan and the region. He added that Pakistan would always face roadblocks in its attempt to become a gateway to Central Asia, as would Afghanistan in its attempt to be a land-bridge to Central Asia, if peace continued to elude Afghanistan. He cautioned that elements supporting violence in Afghanistan continued to use Pakistani territory. In his recommendations, the Afghan envoy said it was important to leverage the people-to-people relationship for greater peace and stability given our common ancestry, faith, language and geography. He felt that while there was a need for genuine, direct, frank and broad-based dialogue between Afghanistan and Pakistan, it was equally important to facilitate media and civil society interaction.

The panel discussion was followed by a live Q&A session. ​I​n response to a question about the lack of discernible action against Pakistani militants based in Afghanistan, Ambassador Zakhilwal was of the view that Afghan cooperation was essential in arresting the culprits behind the APS attack. He added that though the reach of the Afghan state was limited because the country was in a state of war, he felt that his country should support Pakistani military efforts to go after the culprits and make every effort to act on intelligence tips as the elements that threaten Pakistan are the same elements that threaten Afghanistan too. Here, Mr. Aziz noted that both sides are currently working together on border management and investigations, and that progress will be seen in the near future.

On trade, Mr. Aziz felt that facilities at Torkham and people-to-people contact ​would  be central to easing trade between Afghanistan and Pakistan. In response to a question about the peace process, he added that there have been positive developments in achieving an intra-Afghan consensus as both Afghan President Ashraf Ghani and Chief Executive Abdullah Abdullah have reaffirmed their commitment to talks. He said that when talks begin, they should be focused not just on stability but also on establishing a​  long-term ​ and durable​  peace.

Finally, ​ both the Advisor to the Prime Minister on Foreign Affairs and the Afghan Ambassador agreed that ​a majority of  the problems in the Pak-Afghan bilateral relationship were rooted in misperceptions. They concluded that clearing these misperceptions would be the key to forward movement.