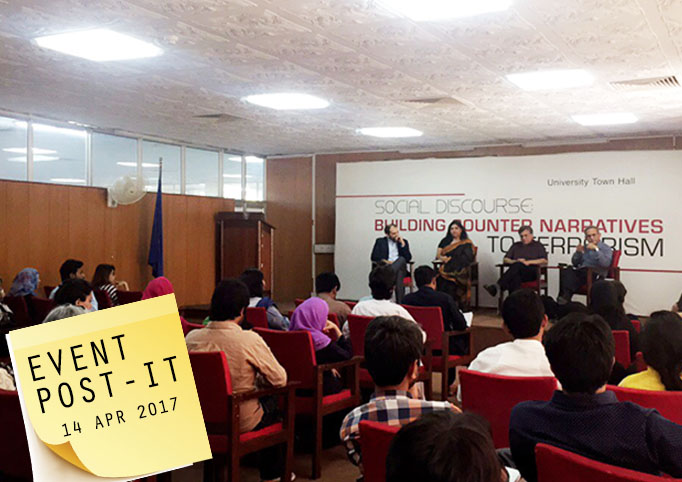 On 14/04/2017, Faced with the increasing operational effectiveness of terrorism in Pakistan, and reports of increased militant recruitment in South Asia as a whole, the importance of combating systemic fissures has increased manifold. Speakers at Jinnah Institute’s university townhall titled ‘Social Discourse: Building Counter Narratives to Terrorism’ engaged in constructive, analytical dialogue aimed at exploring alternative interpretations of socio-political subversion.

Dr. A. H. Nayyar started the dialogue by discussing previously adopted definitions and approaches to narrative building. He advised youth to redefine the national narrative by learning from our past mistakes.

Despite the adoption of the National Action Plan two years ago, the government and the state’s ability to combat extremism and develop a counter narrative remain limited. A disproportionate focus on the military campaign against selected terrorist elements has led to a shunted counter-extremism campaign. Gaps in civilian capacity and a lack of political will to address and combat systemic reasons for continuing intolerance and radicalisation have permeated across the National Action Plan.

Dr. Pervez Hoodbhoy assessed the link between state-borders and terrorism, indicating that closing borders does not end terrorism, as terrorist groups tend to have the same mandate regardless of where they operate. In recent years, citizens have started realizing where the political stance of the country has gone wrong, as they see terrorism affecting their culture, ethnicity, identity and everyday life. Marvi Sirmed approached the topic from a slightly different angle, addressing the links between terrorism and freedom-fighting. She argued that it is important to move away from narratives which justify terrorists as freedom-fighters, as the use of violence is unjustifiable in any settings.

The panel concluded by advocating for public education that promotes democracy and recognizes that citizens of Pakistan have different identities based on different religions, sects and ethnicity. Given that the youth make up a large cohort of the population, they find themselves at a strategic position in society to combat extremism and build a counter narrative to terrorism in Pakistan.