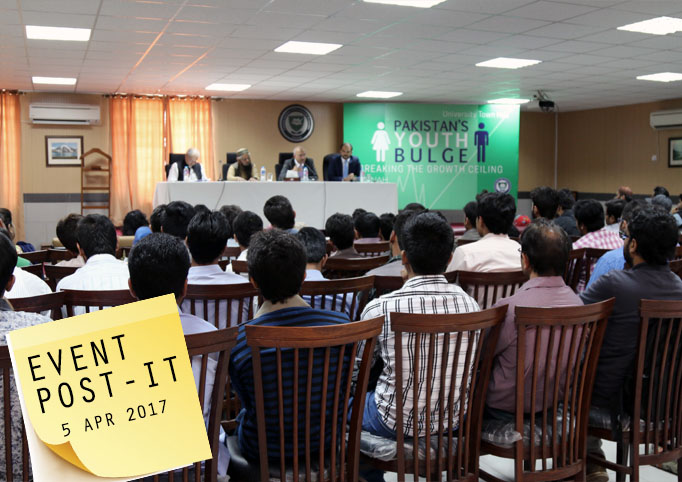 Pakistan’s youth cohort makes up over 60 per cent of the population, providing Pakistan an opportunity to leverage their strategic position to enhance the country’s economic growth; this was the main focus of the speakers at the university town hall on “Pakistan’s Youth Bulge: Breaking the Growth Ceiling” held on Wednesday by Jinnah Institute at the Pakistan Institute of Development Economics in Islamabad.

Starting the dialogue, Qazi Azmat Isa of Pakistan Poverty Alleviation Fund indicated that Pakistan has not invested in citizens, and has failed to provide them with basic services such as education and health. He added that the main predicament facing the nation’s growth is the exclusion of women and minorities from actively partaking in the state’s economy. . By strengthening community-based approaches and increasing labour-incentive opportunities, he argued the need to rethink how we measure growth to ensure they account for inclusivity and equality in the system. Dr. Asad Zaman, Vice Chancellor of PIDE discussed the large potential of the youth cohort, asserting that each individual must work independently for social gain, in order to collectively make a difference in Pakistan’s growth. He also advocated for a shift in education away from the capitalist growth model, to one which is more esoteric.

Haroon Sharif highlighted the presence of an economic and demographic trap in Pakistan, however he noted that demography alone does not lead to economic growth. Using regional countries as comparison, Sharif asserted the importance of policies and reform to maximize growth potential. For example, establishing an incentives structure for the human development of youth, and focusing on job creating sectors will assist in breaking the economic growth ceiling. Adding to the conversation, Syed Hassan Akbar, Director Jinnah Institute, highlighted the upcoming start-up culture in Pakistan, viewing it as an opportunity for growth.

The policy dialogue was followed by an interactive Q and A session. The audience questioned the space and opportunity available to youth in policy-making areas. Students felt that decisions for upcoming generations are being made without any input from citizens under the age of 30. The audience also asked the panel why the ‘youth bulge’ is frequently associated with unrest, and how democratic processes can be amended to be more inclusive.

The session concluded by specifying that the youth policy in Pakistan is not implemented to its full potential. On the whole, Pakistan’s economy is lagging almost 20 years behind regional counterparts. Improving access to finance and promoting networks to enable innovation are examples of policy areas which can catalyze youth transition to leadership positions, allowing greater access to economy, and ultimately breaking through the growth ceiling.