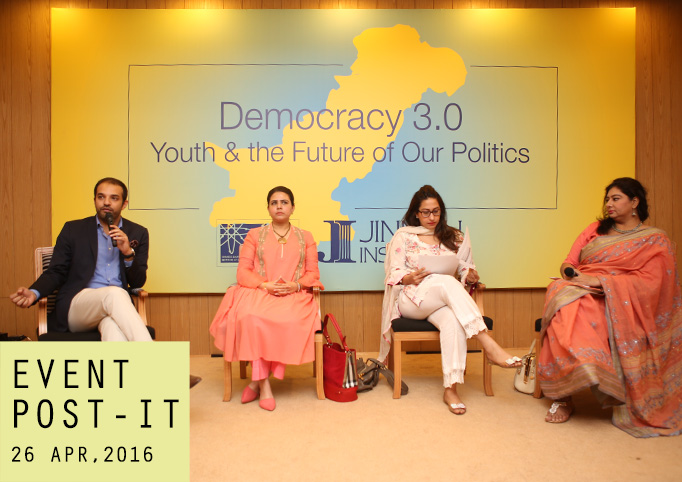 Youth & the Future of Our Politics

On 26/04/16, Jinnah Institute held its first University Town Hall in collaboration with SZABIST University in Islamabad.  The policy dialogue featured a panel comprising of Ammara Durrani, Marvi Sirmed, Meher Bokhari, moderated by Syed Hassan Akbar, and was attended by a large gathering of undergraduate and graduate students as well as faculty.

Speaking at the occasion, Meher Bokhari said that Pakistan’s youth demographic has exceptional potential but successive governments had failed to channelize them. With 67 per cent of Pakistan’s population currently under the age of 30, there have been no efforts to guide youth into politics. Meher Bokhari stressed that schools and universities have not taken the initiative to teach students about their political responsibility and the strength of their votes. She added that the government and media have been unable to provide platforms to effectively mobilize youth.

When asked about the civil activism of youth, Marvi Sirmed asserted that developments between successive elections are more important than events during an election. Between elections, students can take up internship programs and engage with policy-makers and researchers to effectively understand the manifestos of varying policy makers. She added that in order for the youth to be engaged in democracy, political parties and governance structures should incorporate youth into decision making mechanisms. For example, the age of representation in parliament should be brought down to 18 and aligned with the minimum age for voting.

Ammara Durrani noted that the criminalization of student politics in the 1980s created a disconnect between youth and democracy, and a lack of understanding between policy-makers and the younger generation of Pakistan. While the 2013 elections saw an increase in youth engagement, the government and political parties had failed to institute youth inclusive policies in democratic structures. She added that restoration of Student Unions in Pakistan was essential for re-establishing the nurseries of politics and may allow for a robust engagement of youth in electoral processes and governance.

The panelists agreed that power politics, weak party structure and corruption were the main factors in determining the pessimism surrounding youth participation. However, disengagement of Pakistan’s youth in national politics is a collective failure of all stakeholders. Youth need to engage themselves in politics, not just by voting but also through consistent interaction with local government officials. Lack of delivery is an institutional failure, not a problem with democracy. In theory, democracy is a system that empowers the youth.

The policy dialogue was followed by an interactive Q and A session. SZABIST students questioned the electoral procedures currently in place, concerned that most youth are told who to vote for. They noted that society, family and feudalism play influential roles in determining party allegiances, limiting their freedom of expression and right to an independent vote. Such an arrangement moves Pakistan away from democratic tendencies. Another concern amongst students was the structural lack of representation in government even after leaders are voted for and consequently elected, given the absence of service delivery, monitoring and evaluation mechanisms.

This is Jinnah Institute’s first University Town Hall under the Open Democracy Initiative. The Town Hall series will bring Pakistan’s top analysts and academics to universities for interactive dialogues on pressing challenges facing society and government.