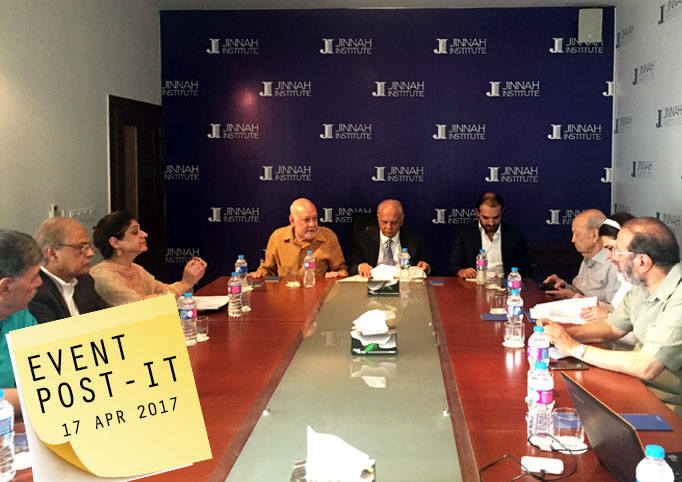 Khalid Aziz, former Chief Secretary of KP and Senior Advisor to the FATA Reforms Committee, reflected on the history of FATA. He noted that during colonial times, the tribal areas shared sovereignty with the British as they were left to govern their spaces according to their own customs. When FATA became a federal responsibility, it meant that it could not access resources, infrastructure or finances provided to provinces as their right. Instead, it relied on a patronage model in its relationship with the federation.

Aziz provided an in-depth update on the government’s reform committee process and salient features of the approved recommendations, highlighting that FATA would require substantial funds from the federal divisible pool to ensure that it is able to catch up to the development indicators of Khyber Pakhtunkhwa.

Lt. Gen. Talat Masood said that some of the major weaknesses of tribal areas lies in education, health and infrastructure. People of FATA have been excluded from democratic entitlements and have not been granted economic or security-related support. Discussions also highlighted large financial resources required for the development of FATA. SaifullahMehsud of the FATA Research Center noted that provincial governments must agree to grant a portion of their financial allocations to tribal areas, which would be a difficult task to achieve. Khalid Aziz specified that additionally, the National Financial Commission would have to grant at least 3% above the provincial allocation of FATA in order to make up for historical neglect.

As FATA reforms continue to face resistance from political groups, some participants felt that the government has not included people from FATA in the committee or the provincial sub-committees. They added that in order to ensure that FATA reforms are implemented, it was necessary to ensure that the rights of the people of FATA are secured in any future merger. Despite the establishment of a FATA Reform Committee, there is still no talk regarding the political inclusion of FATA in the 2018 election. Further, the government appointed Committee does not include any residents from tribal areas. Despite drafting a strong implementation mechanism for the development of tribal areas, Amb. AyazWazir also raised concerns regarding the lack of direct involvement from FATA in determining development projects outlined in the 10 year socio-economic development plan.

This policy roundtable was held under Jinnah Institute’s Open Democracy Initiative, as part of an ongoing series which examines policy-related freedoms and democratic entitlements in Pakistan.
Event coverage: The Express Tribune, Daily Times