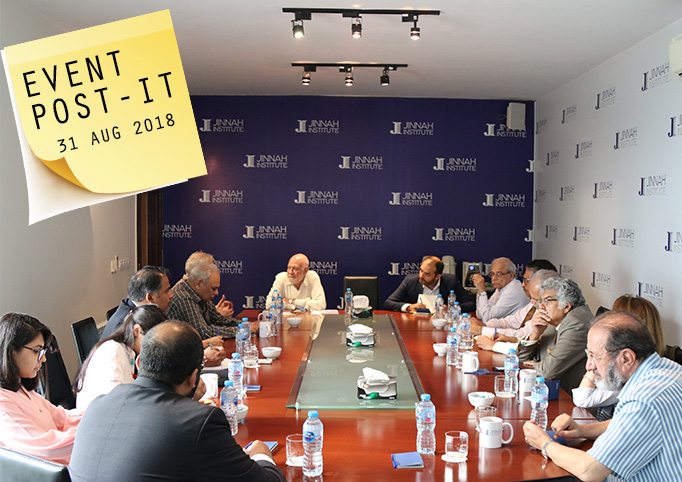 Charting a New Path: Pakistan and the Region

Pakistan’s new government needs to practice quiet diplomacy in the region while focusing on improving governance metrics on internal challenges such as terrorism, extremism, and the mainstreaming of FATA. These were the main recommendations by a panel of eminent policy experts at Jinnah Institute’s round table on “Charting a New Path: Pakistan and the Region.”

The event brought together former ambassadors, academics, policy experts and journalists to discuss policy implications of a changing region for the new government. While the majority of participants voiced patience in examining the performance of the new government, they agreed that recent populist statements on regional policy had been unnecessary, creating controversy both in the case of Modi’s letter and the content of US Secretary of State’s call to Prime Minister Imran Khan.

All participants reached the consensus that the government needs to be more careful with the statements that it puts out. These statements must be well thought out, careful and moderate. Many participants noted that Prime Minister Khan’s comments as well as his pre-election rhetoric had raised questions on his credibility abroad and that it was important for the new prime minister to demonstrate his commitment for reform and his independence to cultivate trust and confidence in the international community.

It was also advised that the government practice quiet diplomacy, and be cognizant of how a proactive approach is not always effective. The Foreign Minister’s decision to hold back to back press conferences over a very short time period was criticized, and it was agreed that a more reflective and cautious approach should be pursued.

Participants raised serious reservations at the lack of policy initiative by the new government on tackling terrorism and growing extremism. They were unanimous in their view that engaging with these challenges was necessary for Pakistan and that without serious forward movement on these fronts, Pakistan’s commitment to regional stability will continue to be questioned. They hoped that the new government would appreciate the importance of these challenges and chart a path of tacking extremism and terrorism effectively through revised internal security policy.

Participants also raised the issue of mainstreaming the tribal areas. They suggested that the interim governing arrangement was a mixture of the Riwaj Act and the older FCR regulations and did not address the real challenges of the people of FATA. It was recommended that the new government take up the cause of implementing the merger of FATA with all seriousness, while adopting an inclusive approach that is responsive to the demands and aspirations of the people of FATA. This, they suggested, would form an essential element of charting peace in Afghanistan.

Gaps in policy and implementation during the earlier government were ascribed to the civil-military divide that had existed on key challenges. The participants hoped that this delicate and precarious relationship would be balanced carefully, and that the two parties could be on the same page as far as key concerns such as extremism and regional peace.