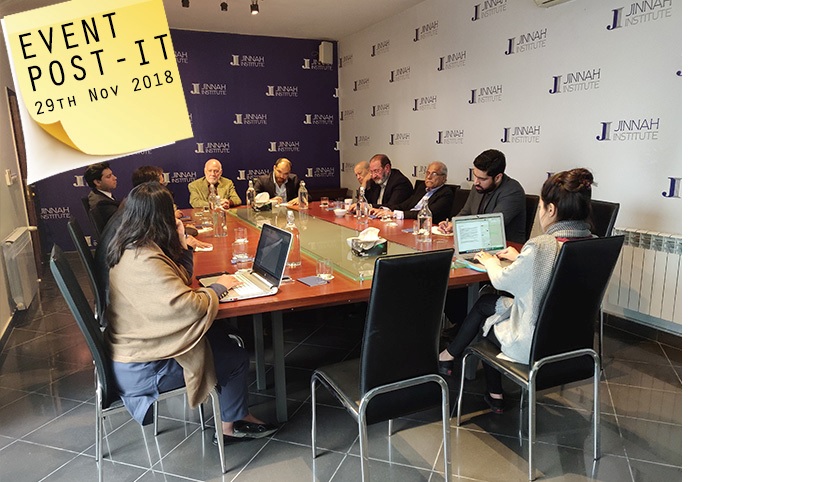 FATA Merger: The Challenges Ahead

Key takeaways from Jinnah Institute’s roundtable on ‘FATA Merger: The Challenges Ahead’ convened to discuss progress on the merger of erstwhile FATA districts with KP and the associated bottlenecks.

Implementation of the FATA-KP Merger Act, rushed through parliament in May, remains stymied with little on-ground progress. The delay in implementation and the inability to structure an inclusive implementation process that takes on board multiple voices from within the region has led to simmering disaffection with the handling of the merger. This has coincided with delay in arranging funds necessary for the development of the region as promised by the federal government, and the extension of administrative services such as district courts, police, and other line departments.

Unpacking Arguments
The view from the majority of participants belonging to the region was that the hasty decision to pass merger legislation was a reactionary step to appease discontent groups. Despite holistic recommendations proposed by the Sartaj Aziz group, the current merger was neither well thought-out nor were enough people from the region asked to weigh in. Of particular concern was the Interim Governance Order which had been revoked by the Peshawar High Court and included harsh measures that betrayed the principles of both the merger and the extension of constitutional rights to the citizens of the region. A few participants argued that the people of FATA had not been included in decision making processes about the future of the region and this needed to be addressed urgently. Lack of representation and involvement by the people of FATA resulted in the FATA Merger Act being largely unrepresentative of the needs and desires of the people. This was harmful for the merger for two reasons: one was that discontent factions could not be appeased; and the second was that the merger could not be successful in mainstreaming the FATA region. The participants also recognized that everyone in FATA does not have the same aspirations, and so it would have been useful if people from different groups were consulted as that would have also decreased the chances of disagreements between the people themselves.

Because the merger has not been implemented to the full extent, it was discussed that FATA has also become a lawless area, as existing tribal laws have been made void, and the new laws prescribed under the FATA-KP Merger Act have not yet been implemented. While the jurisdiction of the High Court and Supreme Court has been extended to this area, it was observed that there are no lower courts, and hence no formal legal system at the village and tehsil levels. It was stressed that a legal framework was necessary after the PHC decision on the interim governance order, otherwise the security situation in the area could become volatile, especially given how many tribes in the area are bordering with Afghanistan. One point of view voiced by participants was that it was too late to reexamine the decision to merge FATA with KP and that the need of the hour was not to reopen the debate on a separate province but to ensure that implementation of the merger act is undertaken in as effective and transparent a manner as possible. It was recognized that multiple views are expressed by the people of the region and creating consensus has remained a daunting challenge, however every attempt must be made to address the majority of people’s concerns and create an inclusive structure for governance. The local government and provincial government elections were seen as one step towards creating a better recognition of the merger amongst the populace as well as promote democratic structures through which development fund allocation could be prioritized. This would allow residents of the region to feel empowered and engaged in the implementation and development process in the region.

Way Forward
As a way forward, it was discussed that the government must take into account the grievances of the people of FATA after the merger, and take steps to address these so that there is no further discontentment. To take stock of the problems, it was proposed that the government make a representative committee, assigning it the task of proposing a legal framework that would be acceptable to local communities and the federal government.

It was also suggested that a body to monitor the integration of FATA with KP should also be created so that current issues in implementation can also be resolved.

Due to lack of community level awareness on the implications of the merger, it was necessary to undertake an information campaign to make local tribes aware of the changes that the merger will result in. This was considered vital for developing a bridge between the people and government and create ownership in the mainstreaming process.
It was urged that local body elections should be held as soon as possible. Through formal representation of the people in the democratic system at the grassroots level, the grievances of the people could be voiced and addressed. Some questioned how issues that could not be fixed at a federal level be fixed at a local level, however, it was agreed that local body elections would be a good step towards mainstreaming of FATA.
It was also recognized that there is a need to lessen media controls and allow discussions on the issue to allow the development of a governance model that has ownership and is sustainable.

It was hoped that relevant quarters would consider the recommendations made, and make the merger process more inclusive.