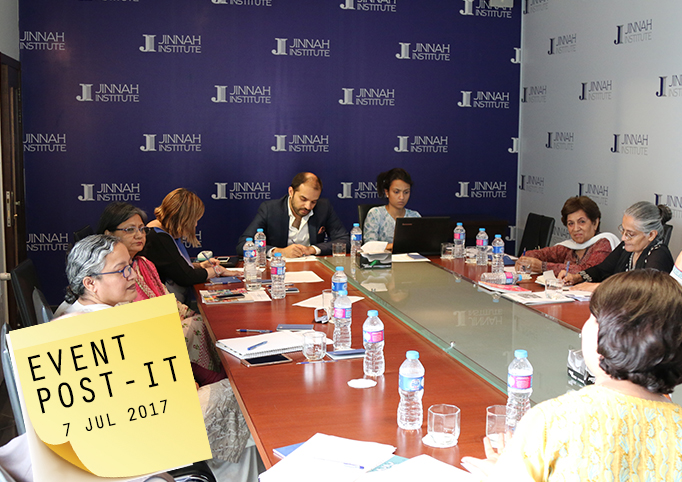 Gender Equity and the SDGs

Participants included representatives from the UN, government agencies, NGOs, and civil society. The discussion commenced by participants noting that although there is an existing parliamentary task force for the implementation of the SDGs, there is no monitoring system in place at the federal level. Despite a number of legislations having been passed since the SDGs came into force in January 2016, many of which are theoretically progressive, there is a lack of implementation and coordination between national and provincial governments. It was further noted that there is no official reporting resource to accurately determine Pakistan’s current gender scorecard. It is therefore difficult to capture the State’s key gender indicators and prioritize them accordingly.

Participants pointed out that since the SDGs have come into force, the government seems to have forgotten promises made earlier. Unfinished business from MDGs, for example, is holding Pakistan back from progressing towards SDG goals. As MDGs focused more on the overarching gender needs, and SDG indicators are more gender transformative, it is difficult for the State to address the latter without realizing the former. It was further indicated that adopting an all-encompassing strategic framework would be more efficient than using a piece-meal approach. Participants agreed that gender equality targets should therefore not be restricted to Goal 5, but rather include other SDGs which indirectly include women, such as the feminization of poverty, and women’s contribution to agriculture, economy and environment sectors. Representatives mentioned that the UN’s is coordinating with the government, as the third generation of programming for Pakistan is currently underway for 2018-2022. The SDGs form the foundational framework for this program.

It was noted that the transition of girls from education to workforce is very low. Even though majority of them are educated in state-subsidized schools and colleges, their education is not translating into economic benefits for the State. Participants added that there is a growing gender-wage gap in Pakistan that needs to be addressed, as majority of well-educated women get paid below minimum wage. The low representation of women in parliamentary and government bodies was also discussed.

The polio eradication campaign which had a person-led line of communication, along with policies for transparency, circulating of information and achievable targets could be used as a case study to achieve milestones for women’s empowerment.

It was unanimously concluded that there is a need for transparency, inclusivity and participation in the way through which SDG targets are intended to be met. Participants agreed that all 17 goals of the SDGs should be assessed in order to understand how the State is working towards eliminating the exclusion of women as a whole. It was suggested that the public sector, private sector and civil society should be included in SDG programming nation-wide to allow for an increase in data accumulation and sharing, and a cumulated focus on specific gender indicators.
It was suggested that a mechanism similar to INGAD be established to prepare monitoring reports on the progress towards SDGs, the responsibility of which should be given to an independent party. Further, a monitoring agency should be established within the government, as opposed to hiring independent consultants. Participants also recommended that the Planning Commission should have greater interaction with media agencies to disseminate relevant information.
This policy roundtable was held under Jinnah Institute’s Open Democracy Initiative, as part of an ongoing series that examines policy-related freedoms and democratic entitlements in Pakistan. Participants included Tahira Abdullah, Sangeeta Thapa, Naheed Aziz, Yasmin Zaidi, Ammara Durrani, Sulleman Shah, Rosemary Arnott, Kishwar Sultana, Naghma Imdad, Daanika Kamal and Syed Hassan Akbar.