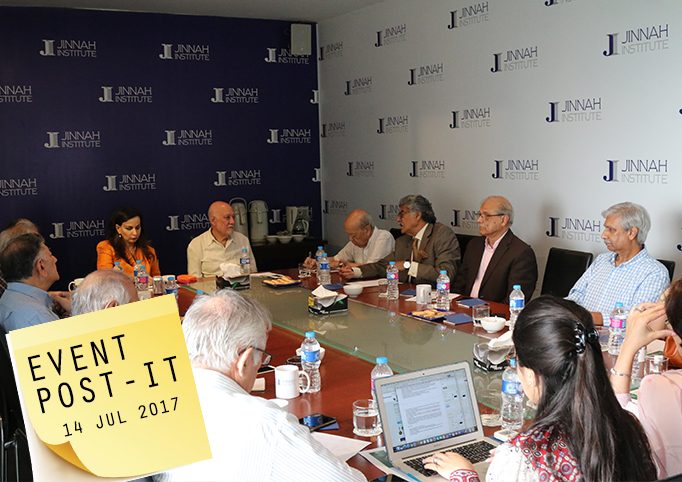 On 14/07/17, Jinnah Institute hosted a roundtable of senior policy experts to discuss Pakistan’s policy options inside Afghanistan in light of new geopolitical challenges as well as an impending US regional policy review. The roundtable was chaired by Jinnah Institute President and former Ambassador to the US Senator Sherry Rehman.

Experts agreed that Pakistan’s policy options in Afghanistan remain limited, and debated ways to break the bilateral stalemate in light of fresh border tensions as well as a growing trust deficit with Kabul. It was important to repair a frayed bilateral equation with Kabul, given that Pakistan continued to face the brunt of conflict overflow from across the border. It remained in Islamabad’s interest to see a peaceful resolution to the war in Afghanistan. Participants agreed that military solutions to the conflict continued to be singularly unviable, and that it was imperative to explore political solutions in order to secure an enduring peace. The number of stakeholders in the Afghan conflict had multiplied over the years, and now included a motley mix of Taiban splinter groups that might be keen to adopt a policy of rapprochement with the government in Kabul. The mainstreaming of GulbuddinHekmatyar was cited as one possible roadmap for bringing repentant militants to the table.

With regard to the United States, a senior policy expert underscored the need to pursue a harmonised approach with Washington and Kabul, and argued that Pak-US tensions were equally damaging for regional consensus-building efforts. With regard to the possibility of a political settlement in Afghanistan, China’s role as a potential mediator was highlighted. Participants also discussed the emergence of Daesh in the region, and the challenges that the group’s Khorasan chapter posed to peace and security not just in Afghanistan but in Pakistan as well. It was in this context that the growing extra-regional involvement of Russia and Iran was viewed as significant, and participants argued that it was in the interest of all peripheral actors to see a stable and peaceful Afghanistan.

Commenting on the political dysfunction in Kabul, participants expressed their concern vis-à-vis the policy statis within the National Unity Government (NUG) under President Ashraf Ghani, and asked whether the Afghan government was capable of overcoming the many challenges it presently faced. The survivability of the National Unity Government was a major talking point, and participants stressed the importance of rebuilding the Afghan economy and maintaining some modicum of political unity in order to withstand internal tensions. It was agreed that Pakistan should fully support the elected government in Afghanistan to help address the strategic disconnect, and that a tripartite and forthright dialogue with Kabul and Washington was perhaps the most viable way forward for Islamabad, with the caveat that Pakistan’s concerns vis-à-vis India’s involvement in Afghanistan must not be disregarded, and instead understood by both Kabul and the new administration in Washington. It was equally important to mainstream the Federally Administered Tribal Areas (FATA) to help stabilise the region, and to address the multiple sources of tension emanating from a largely unregulated border. The refugee crisis also continued to present socio-economic challenges to Pakistan, compounded by widespread anger and hostility amongst ordinary Afghans.