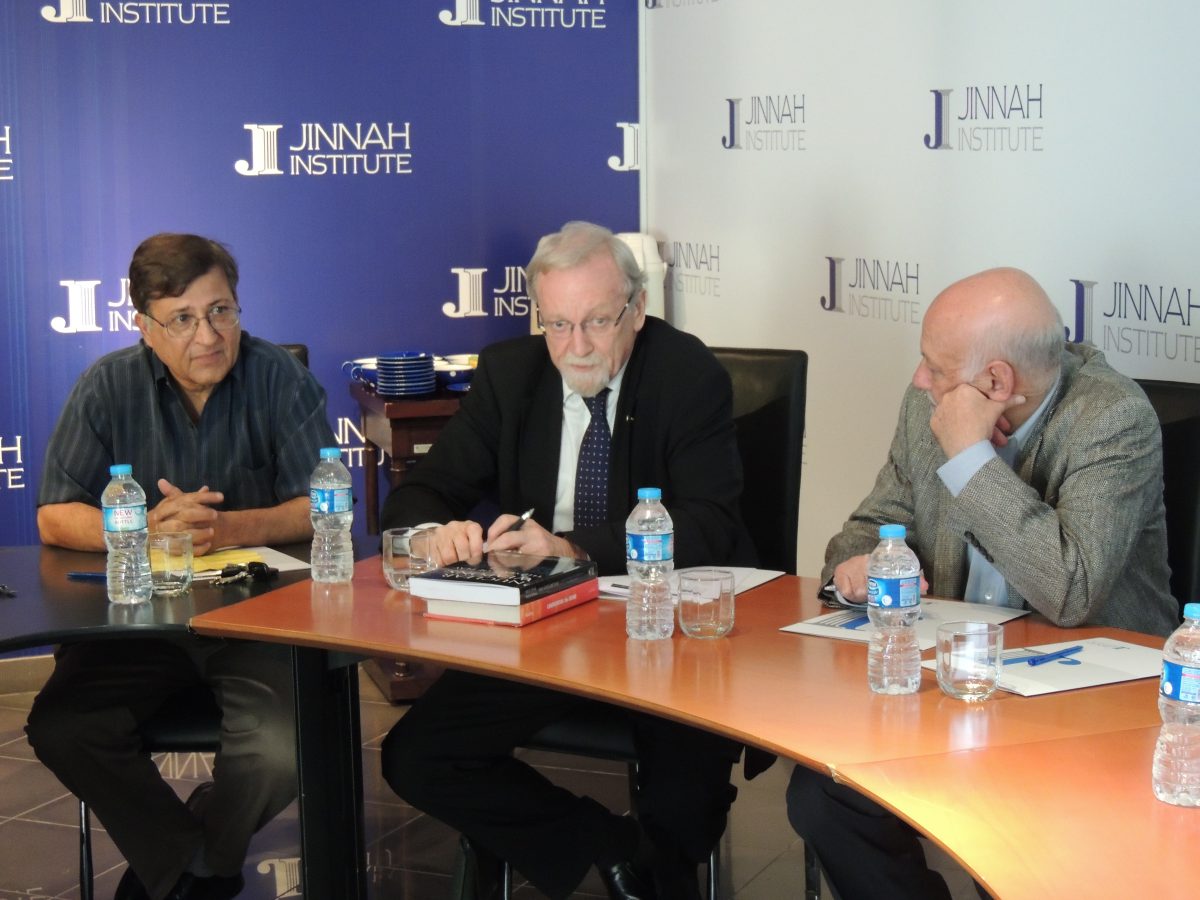 Islamabad – October 25, 2013: While nuclear weapons were intended to restore peace and security in the world, they had actually served to instigate global insecurity – this was the assertion made by senior panelists and experts who had gathered at a roundtable hosted by the Jinnah Institute on Friday entitled “Global nuclear disarmament.”

Speaking on the occasion, Gareth Evans told the gathered experts and analysts that the baseline aim in South Asia was to get India and Pakistan to revert to an unqualified statement of no first use of nuclear warheads. He argued that the initiative was designed to convince states to sign up to a minimization doctrine, and to provide hard content to doctrinal assertions so as to dramatically reduce deployment numbers in the region. It was important, he argued, to get stakeholders to think comprehensively about the risk factors from continued weapons retention.

Director of the Centre for Nuclear Non-proliferation and Disarmament (CNND) and Australian National University Professor Ramesh Thakur, meanwhile, outlined five major arguments, not specific to India or South Asia, about why states pursued nuclear weapon programmes: these were divided into compellence, defence, deterrence, leveraging and status. He added, however, that an overwhelming argument was to be made that global nuclear peace owed just as much to good luck, as it did to sound management. “Nuclear weapons have opportunity costs [that are] more severe for developing countries,” he said, adding that the pursuit of such weapons did little in the way of combating poverty and corruption in the South Asian context. “[They have] little utility in the practical sense; if you go away from slogans, no single argument stands up seriously for any substantial gain to India from nuclear weapons,” he stipulated.

Afterwards, Dr. Pervez Hoodbhoy explained that Pakistan had become increasingly characterized by a loss of stateauthority. “This loss of state authority and increase in the number of nuclear weapons has been taking place side by side,” he observed, adding that this was a causal and not just a temporal correlation. He explained that the initial reason for obtaining nuclear weapons had been to counter India, but that over time the protection of jihadist groups had become a primary motivation for weapon retention.

The senior nuclear physicist also added that there was little chance that India and Pakistan would get rid of their nuclear stockpiles anytime in the near future. He was of the opinion that Pakistan was less secure today than it had been in 1998, and the bomb had done little in the way of resolving the Kashmir issue or providing the country with new technology. He did admit, however, that Pakistan’s nuclear weapons had prevented India from attacking on multiple occasions following crises such as Kargil and the attack on the Indian parliament.

It was also argued during the course of the roundtable that even though the people of the subcontinent were getting substantially poorer, nuclear weapons were still extremely popular and had become indoctrinated in national psyches due to tangible threat perception in India and Pakistan. It was also agreed, that an increase in the number of nuclear weapons made it significantly harder for individual governments to control and protect them from falling into the wrong hands.