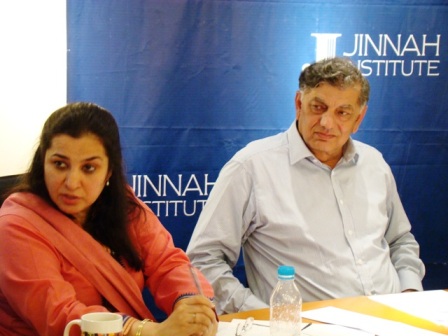 As tensions mount between Pakistan and the US, policy experts call for a clear articulation of coordinated policy

Islamabad, August 4, 2011: At a Roundtable conducted by Jinnah Institute on the state of Pak-US relations, participants expressed serious concern about the gravity of the strain between the two countries, most notably since the Raymond Davis episode. The discussion aimed to assess the relationship between the US and Pakistan in the backdrop of recent events that have further aggravated the deepening trust deficit between the two countries.

The roundtable was attended by former diplomats, academics and members of the policy and media communities. While critically reviewing key nodes of the relationship, there was significant debate about whether the current impasse was a strategic fracture, or a policy hiccup that can be overcome through dialogue and diplomatic engagement between the two governments.

It was observed that much of the volatility in bilateral relations post-Raymond Davis and the Osama Bin Laden killing, originated in Pakistan’s perception of its sovereignty deficits and its willful erosion by some of the U.S policies. Participants voiced concern over growing anti-American sentiment, as its speed it was allowing radicalism to gain ground in Pakistan.

A majority of participants noted with concern that strains in Pakistan-US ties were not merely episodic, but suffering from a structural crisis. It was seen that there was a ‘legacy of distrust’ on both sides and despite efforts from Washington and Islamabad to overcome this challenge, the bilateral relationship would continue to be transactional as it has been in the past. However, many agreed that all strategic relationships tend to be transactional and Pakistan must realize that its ‘mistreatment’ is a direct function of its internal weakness.

There was also apprehension about foreign and security policy shifts in the US, given that many of the key strategic positions are now occupied by people who are perceived to hold hardline views on Pakistan’s role and contribution in the War on Terror.

It was stated that in Pakistan a coherent national counter-terrorism strategy had to be devised after broad based consultations with all relevant stakeholders. Participants noted that foreign policy in Pakistan has increasingly become subordinate to operational security policy which was dominated by the military.

Furthermore, participants felt that the US was not playing an effective role with regard to regional stability in South Asia by ignoring major regional complexities. Participants felt the US should act more responsibly in this regard, bringing its weight towards stabilizing the region instead of the converse.

While some agreed that the strategic and economic priorities of India and the US aligned more closely, these added to the security threats Pakistan has long seen as emanating from India. Some participants felt that Pakistan’s security apprehensions vis a vis India were legitimate, especially now with the endgame in Afghanistan drawing closer. It was argued that Pakistan increasingly faces the challenge of having to deal with the possibility of two hostile borders.

Most of the policy experts agreed that Pakistan has a critical role to play in the US withdrawal from Afghanistan, however, efforts to eclipse this role in the ongoing reconciliation process could further damage the relationship. This would be ultimately detrimental to the common goals both countries have shared over the past decade: elimination of terrorist safe havens and dismantling of Al-Qaeda networks.

There was agreement that Pakistan-US relations need to be re-defined in order to better suit sustainable long term national interests. It was felt that high level consultations need to take place between the two countries on a regular basis with a clear set of expectations and mutually agreed policy frameworks. Strategic cooperation on terrorism should continue, but without compromising on Pakistan’s national sovereignty.

There was a clear consensus that both countries cannot and should not walk away from each other and find ways to remained engage in a non confrontational mode with a focus on long term objectives.