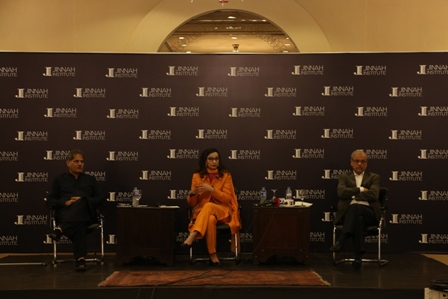 The Jinnah Institute hosted a conference titled “Pakistan: Democratic and Economic Challenges post-2015” in Islamabad on the 30th of July. The seminar was divided into two sessions; with one tackling electoral reform and democratic buy-in and the other addressing inclusive economic growth and regional trade. The seminar was attended by politicians, policy analysts, civil society members and industry experts to discuss and deliberate on some of the country’s most pressing and intractable issues.

The proceedings began with Sherry Rehman, the President of the Jinnah Institute,chairing the first session titled “Electoral Reform and Sustaining Pakistan’s Democratic Buy-In,” which also featured the head of the Centre for Civic Eduction Zafarullah Khan and eminent columnist and analyst Zahid Hussain. Senator Rehman opined that 2013 had been the year of “culling the political process” – alluding to the dharna – stating that civil society has a key role to play in consolidating democratic gains. She commended steps being taken to increase the role of women in the democratic process, which she deemed crucial; along with strengthening existing state machinery that is presently unable to meet the demands of Pakistan’s burgeoning electorate. Senator Rehman reiterated the need to hold elected public representatives accountable and stressed on the need to engage with individuals who can restore faith and integrity in the electoral process.

Zafarullah Khan noted that this was the first time in Pakistan’s history that electoral reform was being considered with due seriousness and vigour. He stated that while the 18th amendment, in part, tried to democratize the Election Commission, it was time to move on and work towards the next generation of electoral reform. Arguing for a more inclusive system, Mr. Khan pointed out that Pakistan is the only country with such a low number of legislators, given the size of the population. He proposed that measures need to be taken to make the electoral system more accessible to the common man.

Commenting on the recent Judicial Commission report, Zahid Hussain said that while allegations of pre-poll rigging have been rejected, irregularities in the post-election process had been emphasised by the Judicial Commission. He highlighted lack of public faith, changing demographics and a lack of adequate law enforcement as problems that currently plague Pakistan’s electoral system, saying “A system cannot work if it is not accountable.” He called for an immediate census as a prerequisite for constituency delimitation and asked political parties to lead by example, saying that transparency and accountability, within their own ranks, are crucial for long-lasting systemic change.

The second session, “Regional Trade: Pakistan’s Comparative Advantage?” was moderated by Jinnah Institute Director Hassan Akbar with panellists Dr. Ashfaque Hassan Khan, Dean of the NUST Business School and General (retd.) Talat Masood. Dr. Khan stressed upon the significance and benefits that can be accrued through an economic bloc. He noted that SAARC can only be a successful economic bloc through cooperation between Pakistan and India and recommended that granting China full membership to SAARC would take the economic bloc’s trade volume from $20 billion to $100 billion.

General (retd.) Masood, picked up on the theme of cooperation between India and Pakistan, stating that while expecting a resolution to Kashmir is unrealistic, it was fair to expect sanity from both sides regarding trade and commerce. He pointed out immaturity emanating from the BJP government and said that while the Prime Minister Nawaz Sharif was keen to move forward, a certain level of reciprocity was required in order to get the ball rolling.