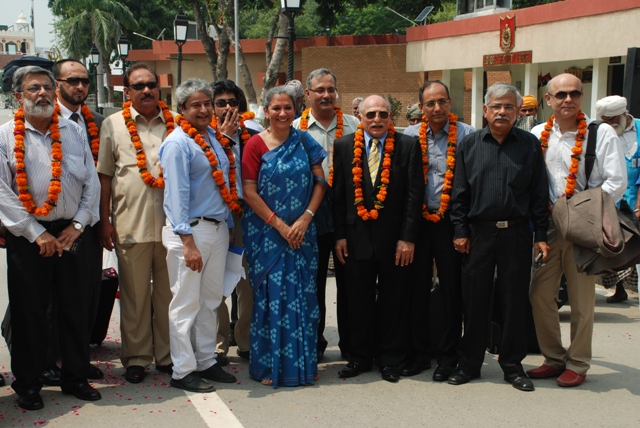 Delhi, 3 September 2012: An eleven member parliamentary delegation arrived in India via the newly constructed border check post at Attari yesterday. This visit of Pakistani parliamentarians has been jointly organized by Pakistani think tank Jinnah Institute and the Federation of Indian Chambers of Commerce and Industry as part of a Track 2 dialogue to determine ways and means to bolster ongoing peace efforts. Titled, “˜Redeeming Our Tryst with Destiny’, this dialogue aims to introduce Pakistani parliamentarians to their counterparts in India to help develop public consensus for greater cooperation between the two states.

In Amritsar, the Pakistani delegation was received by Parminder Singh Dhindsa, Finance Minister of Punjab Government; and the President SAARC Chambers of Commerce and Industry, among others. At the ceremony held in Amritsar, Pakistani parliamentarians reiterated the commitment of the current government to improving relations with India, particularly through trade related bilateral agreements. They also emphasized their commitment to fighting terrorism on both sides of the border. The Indian Punjab’s Finance Minister welcomed the Pakistani delegation and expressed the desire of Indian authorities to take the peace process towards sustainable solutions on all fronts.

Senator Saeed Ghani from the PPP said that the Pakistani government was fully committed to establishing good relations with India. Haider Abbas Rizvi, Deputy Parliamentary leader MQM, highlighted that in addition to Wagha-Attari trade route, the long-standing issue of Khorapar-Munabao required the immediate attention of policymakers on both sides. He also stressed that the Karachi-Mumbai direct shipping route needed to be strengthened given its immense commercial importance.

MNAs Ayaz Amir and Mansab Ali Dogar commented on the importance of peace between India and Pakistan for greater mutualbenefit and regional prosperity. Hafiz Numan, a PML-N MPA from Punjab “” who was representing the Chief Minister  of Punjab “” drew the attention of delegates to the critical issues of water sharing and bilateral disputes.

MNA Bushra Gohar from the Awami National Party said that Pakistan-India relations were undergoing a historical transformation and the ruling coalition was committed to the current climate of cooperation between the two neighbours. She also urged the two governments to immediately resolve all outstanding bureaucratic issues with respect to trade and commerce so that the regional economy could benefit. The present volume of India-Pakistan trade stands at $2.6 billion and, according to various studies, it is estimated that Pakistan’s export to India could rise by a staggering 200%.  Furthermore, the total quantum of trade within a decade can jump to over $20 billion.