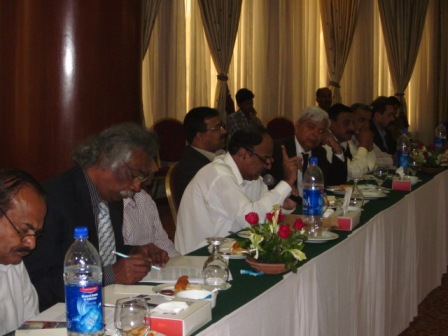 Parties urged to craft their own security plans to ensure safety of candidates and voters: Code of Conduct Round table Participants

KARACHI, 13 February 2013 – Mainstream political parties of Sindh expressed cautious optimism about the enforcement of the newly-issued electoral code of conduct while voicing concerns on the capacity constraints of the Election Commission of Pakistan and related government machinery at a roundtable discussion organised by the Jinnah Institute in collaboration with the Asia Foundation.

The discussion on the code of conduct was attended by representatives of several political parties, including the Pakistan Peoples Party, the Muttahida Quami Movement, the Pakistan Tehrik-e-Insaf, the Awami National Party, the Jamiat-e-Ulema-e Islam (Fazl), and the Jamaat-e-Islami. Participants called for a robust, efficient and powerful election commission, and underscored the need to strengthen the ECP’s capacity to monitor elections and handle complaints.

Izhar ul Hasan of the MQM recommended a ban on elements promoting violence, and urged the ECP to revisit clauses of the code of conduct (CoC) pertaining to the ideology of Pakistan. On the issue of public transport for voters, he said parties and their candidates should be allowed to help their poor voters on election day.

Sharmila Farooqi of the PPP highlighted the election-day challenges related to voter mobilisation, particularly bringing voters to polling stations. She said that it is not feasible for the state to arrange transport with its limited resources. The rule against providing transport will further reduce voter turnout. Farooqi also said that the CoC’s provisions on campaign finance should be revisited in view of widespread illiteracy and ignorance.

Taj Haider of the PPP said that we are living in a class-based society and it is unfortunate much of what is being called reformsimg_1483smacks of bias against poor and working classes.

The issue of transportation is very important as many voters will not be able to arrange transport themselves. Anti-poor politics must end and non-elected institutions should refrain from dislodging democracy.

Nawab Amir from the ANP suggested collectively working to get voters to polling stations, and that parties need to work together to ensure an even playing field for everyone. He said peaceful elections depend on parties developing their own security plans and working together to counter security threats.

Firdous Naqvi, a member of the PTI’s political strategy committee, said that the limits on expenditures approved in the CoC are unrealistic, and many provisions are nearly impossible to monitor.

Karamat Ali of the Pakistan Institute of Labour and Research said that instead of individual candidates, parties should be held accountable for their total campaign expenditures and suggested that they should pay for their candidates just like in Europe and elsewhere, where the state provides resources to candidates and parties in order to encourage equitable political participations. He said that the discriminatory intent from the CoC must be removed.