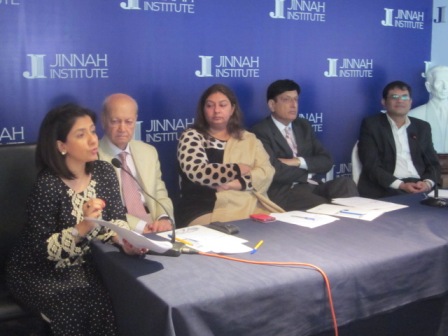 ISLAMABAD, 6 November 2012 – A delegation of senior Officers of the 97th National Management Course, National School of Public Policy, Lahore visited the Jinnah Institute in Islamabad on Tuesday, where they were briefed on the institute’s activities, especially its efforts to further efforts for democratic development, pluralism, regional peace and promoting a culture of tolerance in Pakistan. The group included civil servants from various occupational groups, based across Pakistan and at Pakistani missions abroad.

Raza Rumi, the Jinnah Institute’s director welcomed the delegation in his opening remarks said: “The Jinnah Institute is the first independent, non-partisan think tank in Pakistan. In a short period of time, it has succeeded in increasing awareness on minority rights in Pakistan, and through sustained efforts to promote Track-II dialogue between India and Pakistan, helped improve relations and enhanced the potential for peace in the region. JI has helped connect the public with policymakers.” He also spoke about the need to revive the vision of Pakistan’s founder Mohammad Ali Jinnah, as a modern, inclusive republic.

Lieutenant General (retd) Talat Masood, a prominent defence and political analyst, discussed the Jinnah Institute’s efforts to improve Pakistan-India relations through Track-II dialogue, and how they have encouraged both sides to engage with each other on issues like trade and people-to-people ties. Gen. Masood stressed the importance of such contacts between the two countries, and said that Track-II provides a unique opportunity to stakeholders on both sides of the border as it frees them of the restrictions that the formal avenues of discussion, both military and civilian, place on them.

Sehar Tariq, senior research and advocacy fellow at JI, presented the institute’s extensive research work on the state of education and education policy in Pakistan, and spoke about the different policy perspectives and debates in the sector taking place today. “The Government of Pakistan has declared an education emergency in the country. However, what has been lost in the popular debate is that there isn’t one education emergency to confront. The sector faces a multitude of emergencies, each equally critical to the creation of an efficient and effective education system.”

Muslim Pakistanis, and how it has provided space to the country’s civil society to engage with policymakers and raise awareness. “JI, in a short time, has created a niche for itself. The awareness on minority and human rights issues created by [the institute] and its work has assisted [policymaking bodies like the] parliament.” Sirmed also said that JI has helped show the world that Pakistanis are responsible thinkers who want to engage with the democratic process.

Ismail Qureshi, Rector of NSPP, in his concluding remarks thanked JI and added that senior civil servants and policy makers should consider public input in governance and also engage with various shades of opinion. He also elaborated the importance of trade and making it a centerpiece of our diplomacy and development strategies. A robust discussion followed the presentations where participants engaged with the panelists and exchanged views on various dimensions of Pakistan’s public policy and societal trends.

The Jinnah Institute is a non-profit public policy organization based in Pakistan. It functions as a think tank, advocacy group and public outreach organization independent of government. The Jinnah Institute seeks to promote knowledge-based policy making for strengthening democratic institutions and building public stakes in human and national security discourse. It remains committed to investing in policies that promote fundamental rights, tolerance and pluralism.