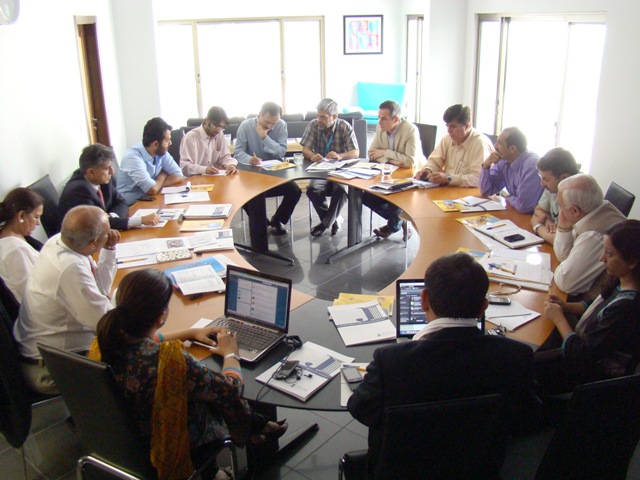 Islamabad, August 10, 2012: The government of Pakistan and international aid agencies are working with sub-national and local stakeholders to build public trust and support for polio eradication efforts, said ShahnazWazir Ali, Special Advisor to the Prime Minister. She was chairing a Roundtable organized at the Jinnah Institute on identifying the impediments to Polio eradication in Pakistan. She also noted that misinformation about the safety of the polio vaccine and its side effects had hampered the drive to reach all children across Pakistan.

Technical experts from local and international organizations stressed that the polio vaccine was safe and had no impact on fertility. Experts leading the fight against Polio in Pakistan dismissed concerns that vaccination teams were being used to collect DNA samples contrary to popular perceptions. They stressed the fact that the polio vaccination teams administer drops orally and there is no element of extracting any DNA material in the vaccination process. Representatives from the Prime Minister’s Polio Cell clarified that the process of procuring the vaccine and administering it were fully transparent. Funds for acquiring the vaccine are transferred directly by international organizations to UNICEF which directly buys vaccine stock from WHO certified and approved vendors.
“Pakistan is poised to eradicate Polio if vaccination efforts continue unhindered”

Dr Elias Durry, who is heading WHO’s polio eradication program, observed that Pakistan is at a crucial phase in the fight against polio and the country is well positioned to eradicate the virus provided that vaccination efforts continue unhindered. He praised the efforts of medical staff and volunteers who participate in the vaccination efforts despite grave threats to their safety and lives. He said that the media had a crucial role to play in continuing the fight against Polio. Michael Coleman from UNICEF noted that while a number of positive stories were being circulated in the media, negative stories were getting more attention and play. Samar Minnallah, a local human rights activist and anthropologist, stressed the need for highlighting positive stories and successes in the mainstream media in order to encourage others to follow suit.

“Over 200,000 children at risk of Polio in North and South Waziristan due to ban placed by militants on vaccination efforts”
District Health Officials from Khyber Pakhtunkhwa and FATA expressed concern over the impact of militancy and insurgency in the region. These factors have reduced accessibility of teams to communities and increasingly it is being observed that communities are denying access to polio vaccination teams in order to seek material benefits such as electricity supply, infrastructure and even an end to drone strikes. However, officials working on the ground in KPK and FATA said that contrary to popular perception, the recent ShakilAfridi incident had little impact on the campaign in these areas as no uptick in refusals has been reported since then.

Arsched Sharif, Dunya News stated that there was a lack of information about the Polio campaign amongst media persons but this could be rectified if public health organizations were more responsive to media queries and made vaccination campaign progress and success stories publicly accessible through their websites.
“Karachi, Quetta and FATA are three remaining bastions of Polio in Pakistan”
Media persons noted with great concern that over 200,000 children in North and South Waziristan are at risk of contracting polio due to the ban announced by the militants operating in the region but no information has been made public about what is being done to rectify this situation. Government officials clarified that they are working with local leaders and scholars to find a solution.

Raza Rumi, Director Policy & Programs, Jinnah Institute said that policy and advocacy organizations needed to support governmental efforts in tackling the polio crisis. Thus, a series of events will be organized by Jinnah Institute in the weeks to come.