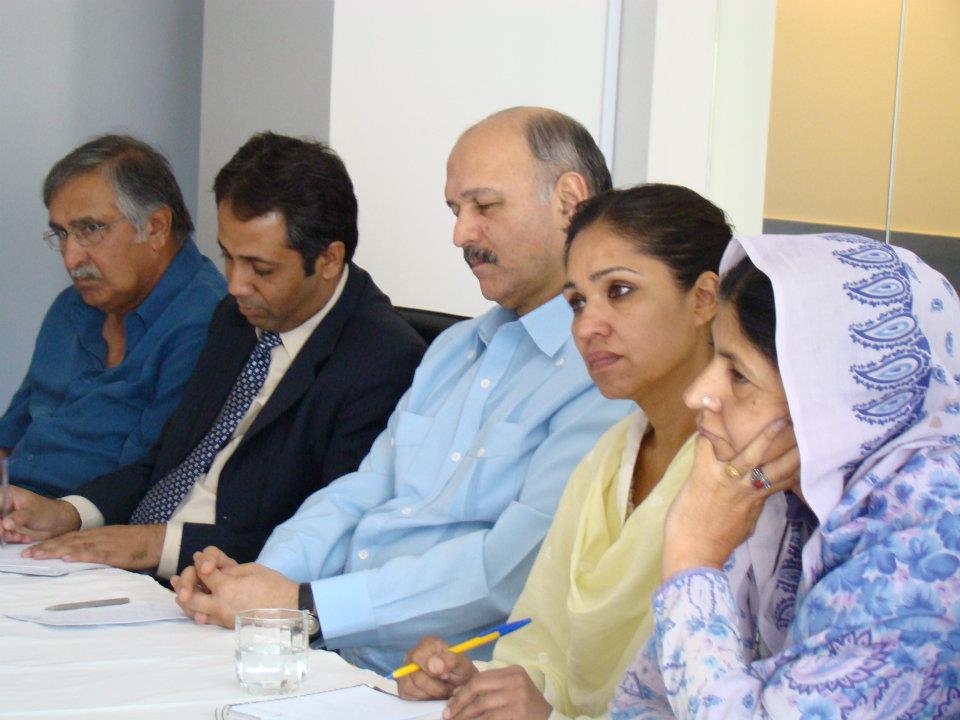 Islamabad, 11th June 2012: The need of the hour is for political parties to look beyond constituency politics and focus more on national policy concerns. This was stated at a roundtable held at Jinnah Institute organized under a Lahore University of Management Sciences (LUMS) political parties initiative.

In his opening remarks, Raza Rumi, Director Policy & Programs Jinnah Institute, stressed on the need for political parties to develop existing policymaking capacity and in addition, have a special focus within each party on formulating policy that envisions the long term interests of the public, rather than short term electoral interests.

Senator Mushahid Hussain Sayed, Secretary General PML-Q, said that a gap exists in almost all political parties in Pakistan when it comes to policy formulation. He added that political parties are focused on constituency politics and on winning elections, rather than on formulating long-term national policies based on informed thinking.

Professor Dr. Mohammad Waseem of LUMS stressed that policy is as important to political parties as their ‘electability’. According to Dr. Waseem, political parties’ focus has remained on networking with the voters at the constituency level so as to ensure election victories.

Malik Amad Khan, State Minister from PPP, raised a point about the mindset of the voters in electing their representative. Mr. Khan said that constituents need to look beyond these petty problems and instead concentrate on the larger public interest – he urged political parties to focus on how to evolve voter thinking and how to create a responsible voter.

On the other hand, Nafeesa Shah, PPP MNA, said that the vote bank that she has is based on well-informed individuals and they need to be given credit for following a particular political party because of their individual inclination or association to the broad political agenda of the party. Lt. Gen. (retd) Talat Masood stressed that politics and political processes should be based on merit and that individual politicians should not be promoted based on their patronage and connections, but rather, on the basis of their experience and credentials – regardless of whether they have strong political linkages or a familial background in politics or not.

Intellectual and poet Harris Khalique suggested that public policy needs to be devolved to the local level. He dismissed the fascination with the middle class as being the bearers of change, especially in formulating public policy.

“No one lets you talk about policy issues on talk shows…”

The second session on media and political parties was moderated by Dr. Moeed Pirzada (Anchor and a Director at PTV) which sparked an interactive debate.

Mohammad Ziauddin, Executive Editor of The Express Tribune, said that the current freedoms were unprecedented and augured well for the future of the country. Lt Gen Talat Masood (Retd.) felt that media has had an overall positive impact on the political process in Pakistan and has become the greatest tool for accountability even though it has crossed its limits at times. Mohammad Malik, Editor of The News, observed that the electronic media has become more aggressive in recent times and is driven by competition and ratings.

Dr. Waseem Akhtar of MQM urged anchors to be more responsible in how they steer debates as it can lead to social unrest when party loyalists protest against the negative projection of their party leaders. He also spoke about the importance of media verifying its sources, as unverified news can be very damaging to a politician’s image.

Similarly, Kashmala Tariq of PML, questioned the professionalism of the media. She said while electronic media is still evolving, there is no ‘code of ethics’ and little regulation on yellow journalism or the monopoly of media cartels in the industry. She said PEMRA has become a very ‘weak’ organization and advocated for greater regulation. Gibran Peshimam Political Editor of the Express Tribune, said media involvement in the political process depends on what role the media plays.

Maliaka Raza of the Policy and Planning Cell of PTI, acknowledged the role of media in shaping public opinion but questioned whether it was a ‘responsible’ institution. ‘No one lets you talk about policy issues on talk shows, they are only interested in their own agenda’. Fahd Husain (Anchor, ARY News) said it is important for the participants to have realistic expectations of electronic media as it is a superficial medium with inherent limitations and was still maturing and had to cater to the interests of their viewer.

Farrukh Pitafi said Pakistan media was a classic example of expanding space but diminishing quality. Murtaza Solangi added that unless the state demonstrated a good moral ground, they have no authority to regulate private media. Journalist and anchor Wajahat S Khan of the Friday Times and Aaj Tv urged the attending politicians to advance laws that free state media and radio, saying that top journalists would flock towards public broadcasting. Senator Attiya Inayatullah agreed and felt all the issues discussed were part of the evolutionary process for the media and hoped that it would find its own logical end. She praised the print media and radio for not undermining the democratic process.