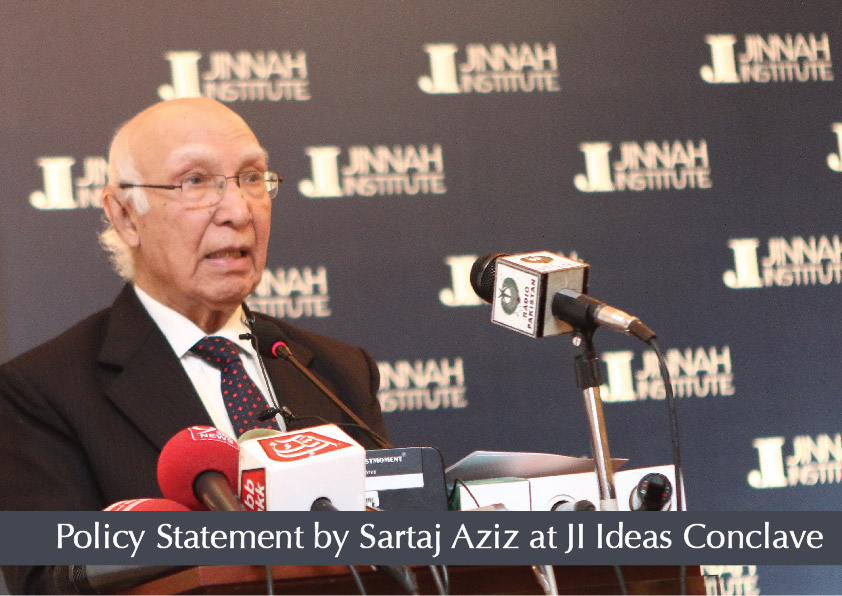 Address by the Adviser to the Prime Minister on National Security and Foreign Affairs, Mr. Sartaj Aziz

I would like to begin by commending the Jinnah Institute for convening this “Ideas Conclave.”

It is indeed a laudable initiative to bring together policy-makers, thought leaders and civil society partners, to deliberate on key national issues and generate ideas on appropriate policy responses.

I am confident that this Conclave would produce useful policy inputs for some of the major challenges and opportunities before us.

We are all aware of the age-old adage that change is the only constant in life. South Asia is no exception to this rule.

The region is undergoing far-reaching changes in geo-political, security, economic and social spheres. In fact, we are living in a time of profound transformation in global politics and economy.

We have witnessed a steady shift of the economic center of gravity to Asia.

The geo-political landscape is increasingly marked by paradigm changes in Europe, Asia-Pacific, North Africa, the Middle East and the Gulf.

There is renewed talk in many quarters of a “new Cold War.”

The relationships among the major powers – particularly the U.S., Russia and China – have seen strategic shifts, but not yet found a new equilibrium.

The “Asian pivot” or “rebalancing” – though primarily focused on the Asia-Pacific – is also generating new dynamics in South Asia.

The rise of potent non-state actors, like ISIS, has changed the global threat matrix and is beginning to imperil the stability of many states and societies.

Meanwhile, globalization continues to forge ahead, with all its positive and negative ramifications.

Terrorism, climate change, economic interdependence, regional integration, and a shrinking globe, are all facets of the infinitely complex world that we are destined to grapple with.

The situation in South Asia is affected by these phenomena, and is heavily conditioned by the global environment, which itself remains in a state of flux and instability.

As we all recognize, South Asian countries are at varying stages of economic and political development — that sets the scope and limits of collaboration in both these realms.

Most South Asian countries have gone through elections since 2013 and there have been significant leadership changes.

The new governments in India and Afghanistan are in the process of setting their domestic and foreign policy priorities.

The welcome advance of democracy in the region has also been accompanied, unfortunately, by deeper political and social polarization.

In some instances, patently communal and ultra-nationalist elements have been seeking to enter into the mainstream.

Meanwhile, the region continues to lag behind in realizing the Millennium Development Goals (MDGs) and is home to the largest concentration of people below the poverty line.

While the development agenda is largely stunted, there is a single-minded pursuit by some in the region of military build up – both in the nuclear and conventional domains – with serious effects on strategic stability.

Efforts for pacific settlement of disputes continue to be stymied by intransigence, while meaningful regional economic cooperation is hampered by the desire of some to dominate.

The drawdown of international troops from Afghanistan is a welcome development, yet fraught also with fresh security challenges.

The new leadership in China has set out a vision of deeper engagement with South Asia, raising the prospects of advancing shared goals of peace, security and prosperity.

It is in this strategic milieu that Prime Minister Nawaz Sharif has enunciated “peace for development” as the defining principle of Pakistan’s foreign policy.

Building a “peaceful neighborhood” and a rebalancing between geo-strategic and geo-economic priorities constitute the main pillars of this policy.

The Government is accordingly embarked on resolute efforts to create a peaceful external and internal environment, so that the core national objective of economic development is robustly advanced.

The vision of a peaceful neighborhood cannot, however, be realized without a qualitative transformation in our relationships with India and Afghanistan.

The improvement in Pakistan-Afghanistan relations has already started but India has not reciprocated our outreach.

A two-year hiatus in dialogue had widened the perceptions gap in both countries, which required realignment through a comprehensive and structured engagement.

India’s decision to abandon the path of dialogue with Pakistan and adoption of a hostile posture, bilaterally and regionally, has created a new level of uncertainty.

The cancellation of Foreign Secretary-level talks by India on the pretext of our High Commissioner’s meeting with Kashmiri leaders was found unconvincing worldwide.

Any efforts by India towards unilaterally altering the status of Kashmir would further compound the already complicated situation.

Unprovoked and indiscriminate firing and shelling from across the Line of Control and the Working Boundary, with Indian leadership threatening disproportionate use of force, portend India’s dangerous desire to create a space for war.

This behavior also reveals a clear dichotomy in India’s insistence on eliminating terrorism on the one hand and creating distractions for our armed forces engaged in a relentless and non-discriminatory counter-terrorism operation ‘Zarb-e-Azb’ on the other hand.

The international community recognizes that Pakistan’s counterterrorism efforts must be strengthened, and not impeded. But India has other ideas.

From the outset, Prime Minister Nawaz Sharif had emphasized to the new Indian leadership that the main dynamic in South Asia should be cooperation, not confrontation.

Consistent with this perspective, we remain committed to building cooperative and good-neighborly relations with India, but on the basis of mutual respect and sovereign equality.

We continue to follow a policy of restraint and responsibility, but determined at the same time to resolutely defend our national interests.

We will not get drawn into any arms race, but will ensure maintenance of a credible deterrent capability.

Pakistan shall not abandon its political, diplomatic and moral support to the Kashmir cause at any cost.

The prospect of enhanced economic cooperation has been a victim of the prevailing tensions. An agreed roadmap exists, and awaits an environment conducive for its implementation.

In sum, Pakistan remains committed to a sustained, unconditional and result-oriented dialogue. Since it cancelled the dialogue, the onus would be on India to take the initiative.

South Asia is home to one-fifth of humanity. We believe the fulfillment of their aspirations for a secure and better future should have primacy over any other consideration.

Our western neighbour, Afghanistan, is also at a pivotal juncture.

Decades of war, external involvement and internal conflict affected all aspects of national life in the country.

Undaunted, the resilient Afghan people are determined to emerge from decades-long conflict and to build a prosperous future.

2014 was a year of landmark transitions — in political, security and economic realms.

The swearing-in of President Ashraf Ghani on 29 September 2014 ended the uncertainty about Afghanistan’s political future. Peaceful transfer of power and formation of a National Unity Government were historic firsts.

The Afghan National Security Forces (ANSF) have assumed “full” responsibility for security, as NATO-led ISAF wrapped up its combat mission and assumed a “train, advise and assist” role in the framework of “Resolute Support Mission.”

Simultaneously, Afghanistan has commenced the “Transformation Decade” (2015-24) with the primary goal of becoming economically self-reliant.

To this end, an ambitious reform programme has been outlined by the new Afghan government, which is supported by the international community.

International engagement over the past 13 years has helped bring about substantial improvements in Afghanistan — including in the economy, infrastructure, health, education and democracy-building.

In our view, it is imperative to preserve and consolidate these gains.

At the same time, it is essential to address the challenges — reflected in a surge in insurgent activities, continued narcotic production and trafficking, and issues related to corruption and governance.

We believe this precious moment of hope and optimism in Afghanistan must be defended, by not repeating the mistakes of the past.

International community’s continuous engagement is a major imperative, since another abandonment of Afghanistan would lead to a repeat of the 1990s.

The new Afghan government must be provided continuous economic and financial support for economic revival and for delivering on its reform agenda.

All Afghan stakeholders must be convinced that their country would emerge stronger only if they worked with each other, not against each other, to carve out a political settlement.

The external actors would have to agree on a regional consensus on non-interference.

Allow me to emphatically reaffirm that Pakistan’s Afghan policy is guided by our national interest — which clearly lies in a peaceful, stable, united and prosperous Afghanistan.

Since assuming office in June 2013, the Prime Minister has worked assiduously to build a friendly and good-neighbourly relationship with Afghanistan, based on mutual respect for sovereignty and territorial integrity.

Our swift and substantive engagement with the new Afghan leadership has yielded significant results.

The visit of President Ashraf Ghani in November 2014 helped open a historic new phase in the relationship.

We are moving away from the past pattern of mutual mistrust and building a forward-looking relationship.

The two leaders have agreed on forging a “comprehensive and enduring partnership” that contributes to the security and prosperity of Pakistan and Afghanistan and reinforce efforts for peace and development in the region.

Both leaders have made a joint commitment to fighting the scourge of terrorism through common endeavours and not allowing respective territories to be used against each other.

We have also committed to support an Afghan-led and Afghan-owned peace and reconciliation process.

Pakistan is also supporting the Heart of Asia-Istanbul Process, and would host its Ministerial Conference in 2015.

These positive trends are reinforced by the enhanced engagement of China – both bilaterally with Afghanistan and in the regional context.

Pakistan has viewed this as a welcome development – promising for Afghanistan’s peace, security, reconciliation, and economic progress.

China’s endeavours with Afghanistan, aligned with Pak-China cooperation on strategic projects like the Economic Corridor, would help effectively promote our common goals of a peaceful and stable Afghanistan as well as a prosperous region.

It is clear from the foregoing that, like the rest of the world, the change in South Asia also entails strategic challenges and opportunities.

We continue to dispassionately assess the emerging trends and pursue realistic goals — dictated by Pakistan’s national interest and supported by all state institutions and have taken far reaching decisions to meet emerging challenges.

I am confident that this discourse would help deepen understanding of our endeavors and strengthen public support for Pakistan’s mature approach in navigating the change in South Asia and beyond.