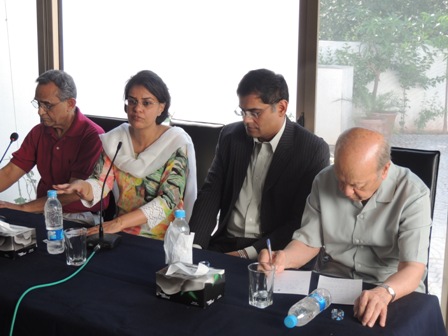 ISLAMABAD May 8, 2013 – Senior civil servants from the National Management College visited the Jinnah Institute on Wednesday, where they attended a seminar on the institute’s projects and activities, in particular Track II diplomacy, education policy and democracy.

Raza Rumi, the Jinnah Institute director, welcomed the participants and spoke about the various sectors in which the institute is active, including promoting democracy and human rights, domestic policy, and foreign relations. Mr Rumi highlighted JI’s most recent projects, including a review of political parties’ manifestos ahead of the 2013 general election, Pakistan-India Track II diplomacy, and Extremism Watch, the institute’s annual study looking at extremism and its various manifestations in Pakistan.

Safiya Aftab, an economist and analyst, spoke to participants about the recently released manifestos of the political parties contesting the 2013 election. She broadly discussed the economic policy in all manifestos and highlighted their similarities and differences, emphasizing that political will was necessary to resolve Pakistan’s outstanding economic challenges. “The PTI manifesto reads like a party contesting the election for the first time – very ambitious and confident, whereas, PML-N’s manifesto seems more honest and business friendly,” she observed. The PPP’s manifesto was geared towards their traditional vote bank and addressed concerns of rural communities and farmers in particular.

Dr A.H. Nayyar, a prominent education expert, discussed the various issues Pakistan has faced in improving both the quality and

scope of its education system. Dr. Nayyar focused on the challenges related to Pakistan’s curricula, and the fact that years after a task force released its findings about the problems with what Pakistani children are taught in schools, the same text books are being used. Except for Punjab, other provincial governments have not been able to modernise and improve their textbooks in line with the task force’s recommendations. The content, Dr. Nayyar said, was particularly problematic in the history curricula.

Lt. Gen (retd) Talat Masood spoke about Track II diplomacy and its importance, looking in particular at Pakistan-India relations and the role that Track II channels have had in improving them. Gen. Masood said that Track II was useful for bilateral relations, especially when primary diplomatic channels are not engaged. He felt that new ideas can for conflict resolution can generated through independent forums like the Jinnah Institute. These ideas can then be taken back to respective governments and may bring about positive change. Gen. Masood pointed out, however, that a paradox comes about when voices that match government positions on critical issues are more likely to be heard and accepted in official quarters than those that offer a differing view. This sometimes defeats the purpose and aim of Track II engagements. Raza Rumi added that Pakistan should follow the China approach by trading in the region and seeking win-win economic solutions.

A lively Q&A session followed the discussion, where visiting civil servants engaged with the panel on issues related to the economy, social and development policy, as well as the issues and concerns around the general election a few days away.