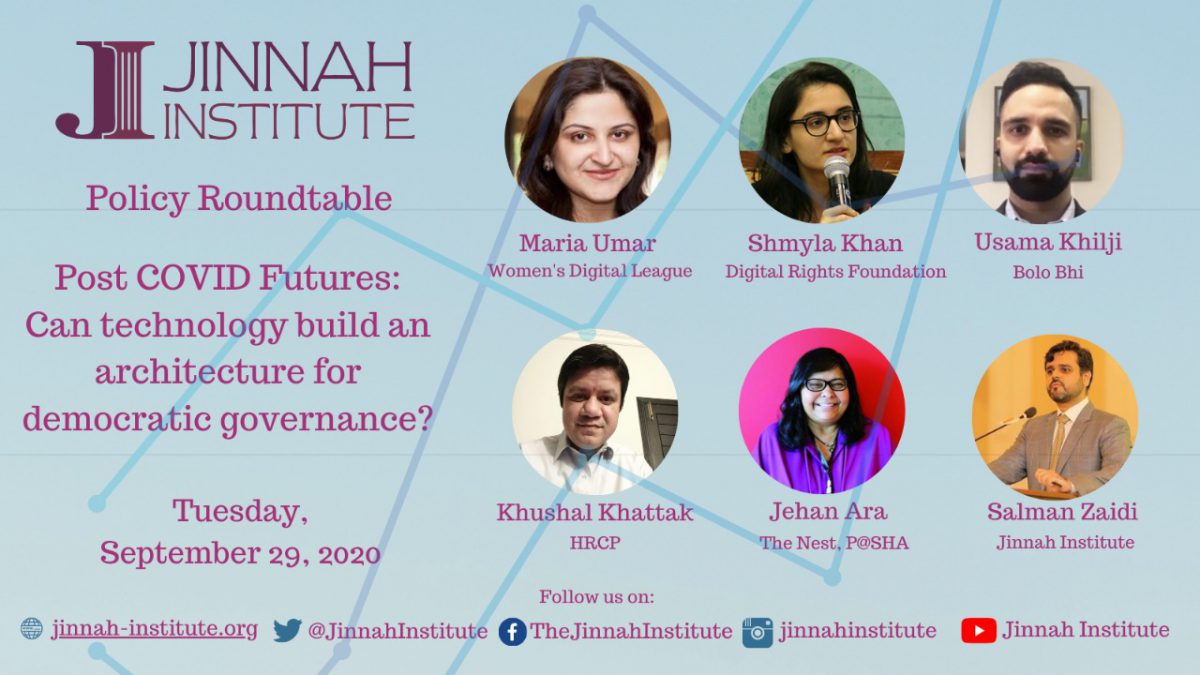 Can technology build an architecture for democratic governance?

Technology has played a transformative role during the ongoing COVID-19 pandemic. What does the increased reliance on technology globally really mean for democratic governance? How has technology really benefited us with regards to being engaged citizens? Ms. Jehan Ara, while acknowledging the digital divide that exists in Pakistan, stated that technology can play an instrumental in remedying the issues that currently exist in the education, health, and communication sphere. For instance, during the COVID-19 pandemic, there were a lot of Ed-tech start-ups came to the fore and made online learning possible. “These tech start-ups understood that this is a new platform which requires different methods of engagement, something which traditional educational institutions struggled to do.” At the same time, one cannot be oblivious to the fact that limited access is a serious obstacle. Regarding the role technology can play in improving governance, she stated that the government has access to a large volume of data; how that data is used to improve service delivery is ultimately up to the will of the government. She further added that both access to data and its protection is crucial for Pakistani citizens. “We need to strike a balance between access and protection of data, since the data belongs to the citizens and we need to ensure that it is not abused.”

On the subject of the intersection between technology and media, and how technology can enable the media to improve access to information, Ms. Amel Ghani, stated that there have been positive developments of note during the last few years. For instance, increasingly journalists have been submitting Right to Information (RTI) requests and have been sharing their findings online. Such interventions improve access to information and transparency. Technology has also played an important role with regards to press freedoms allowing journalists to do their job without being curtailed. This is evident as a number of journalists are now reaching out their audiences directly using websites or Youtube channels. “At the same time, there are examples of the government using technology to arbitrarily suppress speech in online spaces, which is unfortunate.”

Building on the subject of the regulation of speech in online spaces, the broader issue of human rights and its connection to technology was also raised. Mr. Khushal Khan noted that there are two sides to the issue. “We have witnessed the effective use of social media platforms such as Twitter and Facebook by marginalized groups in the country who otherwise struggle to find a voice in the mainstream media.” However, he added that the government is also attempting to control the narrative on social media, for instance by using PECA against journalists and activists. Ms. Shmyla Khan also chimed in on the issue by arguing that it would be a mistake to view online spaces “as an area of control.” The goal should be to ensure speech instead of controlling it. Furthermore, she opined that there is a need to make PECA more citizen friendly, and that the role of civil society is that of a watchdog. “The state should not view civil society as an obstruction, but as a partner in assisting the government where it lacks capacity at the moment.”

The participation of women in online spaces and also the quality of their participation was a key issue that was discussed by the panel. Ms. Shmyla Khan explained that when these online spaces were relatively new, there was an assumption that they would be gender neutral. “However, what we have witnessed is that the internet tends to replicate the same structures of oppression. It is connected to our political and social landscape.” She also stated that it is not enough to talk about access to technology without factoring in the social and cultural barriers that exist.

Another topic that was discussed by the panelists was how large infrastructure projects such as CPEC can impact technology, innovation and development for the youth in Pakistan. Mr. Salman Zaidi stated that Pakistan’s integration in the CPEC project has operated in a very covert space thus far, therefore there is a lack of transparency surrounding the project and what its impact might be going forward. “CPEC is primarily a strategic project for China, and is not intended to benefit the citizens of Pakistan.” He further explained that such large infrastructure projects usually disenfranchise citizens in terms of access and ownership to land, at least initially. Whether it will turn into a game changer for Pakistan, remains to be seen. There was consensus among the panelists that such projects will help with regards to job creation, but maybe not so much when it comes to furthering innovation. Ms. Jehan Ara explained that innovation will be stifled since only Chinese technology is being implemented. “When you have a partner that is much more advanced technologically, there is an imbalance of power in the partnership.” She further added that there are concerns in the Pakistani technology sector about the extent to which it will be able to benefit from these infrastructure projects. However, she concluded on a positive note by pointing out that a number of local companies have been collaborating with Chinese counterparts as part of CPEC, so there is definitely potential for growth and innovation if Pakistan plays its cards right.