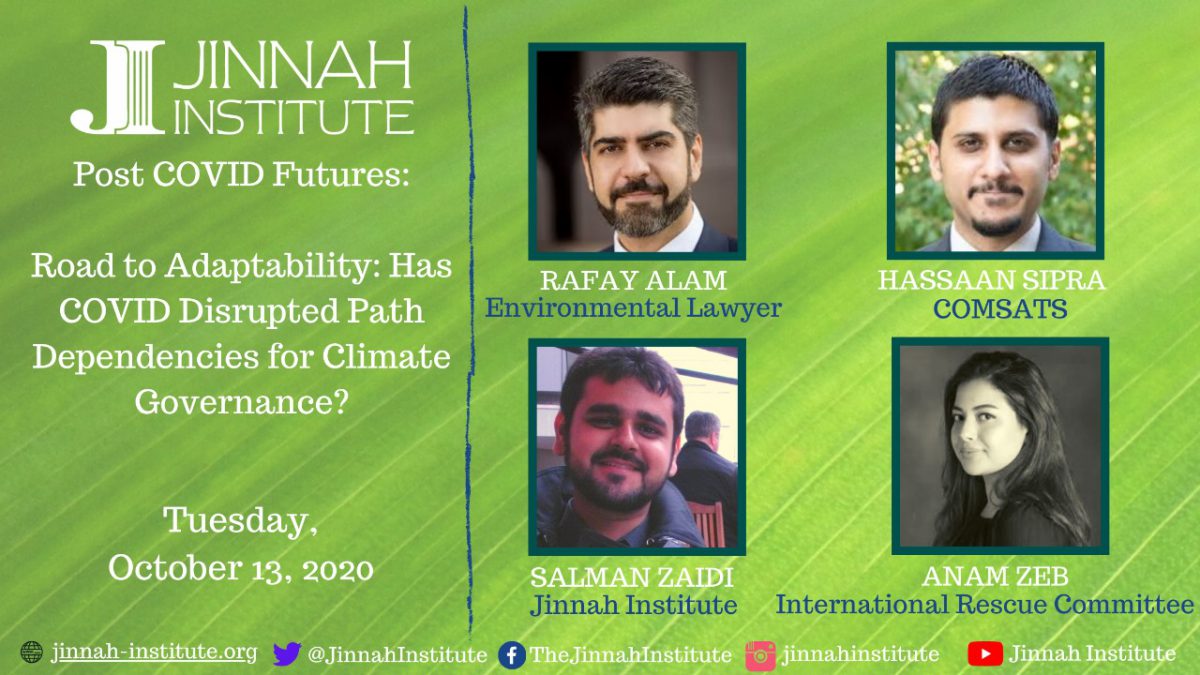 Seven years into the overhaul of our adaptive capacities and institutional realignment, there are still lingering questions regarding the extent to which Pakistan’s adaptive capacities have improved to respond to climate disasters and pandemics. Is there evidence to suggest that the government is doing any better on the adaptability front, and that the most vulnerable communities to climate change in Pakistan are being safeguarded any better? Rafay Alam explained that there is a need for our responses to be decentralised. Earlier in March with the COVID-19 pandemic at its peak, the Federal government accused the Sindh government for acting in a manner that was hindering the state’s centralised response. As the lockdown was initiated, instead of witnessing the practice of provincial writ in line with the 18th amendment, we saw a reflex action on part of the Supreme Court through the National Command and Control entity. “This is indeed worrying when one considers the scale of the climate change impact in parts across Pakistan.” It should be a matter of concern if the response to climate change is similarly centralised by the government instead of allowing provincial units to fulfil their responsibilities. It may be an attractive argument for some to suggest that the disaster management and climate change responses should be centralised from a technical standpoint, however, from a legal perspective there is a need to ensure that federative units work together and conduct federative diplomacy. This diplomacy should form the core of our climate change response, in lieu of a knee jerk centralising response that violates the spirit of the 18th amendment.

Echoing Mr. Alam’s sentiments regarding decentralisation, Hassaan Sipra added that Pakistan’s climate change adaptability measures will have to go down all the way to the local level. “What we have learned from the COVID-19 pandemic is that the largest impact investment needs to be made at the local level to tackle future disasters.” There is a need to clarify and engage in greater discussion regarding federating rights and how the 18th amendment can fully empower the provinces. When devising strategies to cope with crises such as climate change, it is imperative that federative diplomacy be facilitated amongst the provinces. However, the challenge remains building the capacities of key coordinating agencies all the way down to the district level. He further added that while there are some takeaways from the government’s COVID response that could be applied in the case of climate change, the magnitude of the two crises varies significantly; therefore, the response will have to be scaled up correspondingly, both in terms of effort and financial investment.

Regarding what metrics of adaptability we should be looking out for and if any of these have been reflected over the past six months, Anam Zeb explained that mitigation measures are generally more straightforward to implement and track, such as a reduction in the level greenhouse gas emissions. On the other hand, adaptation and building resilience is a much more complex process and adaptation activities are a lot more difficult to pin down as they can include long term processes such as improving infrastructure and increasing educational access. She further explained that policies regarding climate change on a provincial level are essentially wish lists of what they would like to achieve, devoid of an implementation framework. There is also the token mention of gender in both federal and provincial policies, however there is not much mainstreaming of it. There is a need to realise that at this point adaptability measures need to be urgently insttitutionalised. Moreover, the magnitude of the challenge is such that domestic climate change financing alone will not be sufficient. However, “we have started a budget tagging system at the federal level, which some of the provinces are trying to emulate as well, where activities are categorized as either mitigation or adaptability to assist with better planning and budgeting”.

On whether we can reflect on recent events to improve our understanding of the effects of climate change, Hassaan Sipra explained that the severity of our monsoons will continue to increase. Additionally, with the increasing level of rural to urban migration taking place, there is a need to update our data on a continuing basis to get an accurate assessment of the scope of the problem. This process requires an iterative public policy approach as part of which institutions need to be empowered. Pakistan needs to optimise global climate models. Currently, it lacks a climate research center to carry out modelling work, which means that the data is not optimised according to the local context.

In Pakistan’s context, there is also a deficiency with regards to how the severity of the climate change crisis is communicated. “We need to change the way we are communicating climate change and devising measures to address it”, Anam Zeb explained. In order to make it more appealing for the private sector to invest in green businesses, it is important to reframe the issue in a manner that highlights the benefits that could accrue from a financial and profitability standpoint in the long run. Chiming in, Rafay Alam stated that the issue is not just about financial viability. Based on the tariffs offered by NEPRA, it is cheaper to generate renewable energy as compared to coal fired electricity; despite this, companies are tied to long term IPP contracts for the next 30 years. “Capitalism, patriarchy, consumerism, and the fossil fuel based economy; we cannot employ instruments of the very systems that have brought us to the verge of extinction. We need to resist these systems by instituting anti-capitalist measures if we are going to have half a change at fighting this crisis.”

On the question of how we can break path dependencies and devise a more holistic approach going forward, Hassaan Sipra pointed out that some initiatives such as the tree plantation drive, clean and green index for cities, and the focus on waste management and water are undoubtedly positive. Anam Zeb however was of the view that the sole focus on activities like tree plantation gives us an insight into how limited the government’s understanding is of the climate change crisis. Many of our policy makers have a very narrow understanding of what their roles and responsibilities are in this crisis. “We need unprecedented levels of commitment to deal with the climate crisis, and there are few signs of such commitment in Pakistan as of yet”, stated Rafay Alam. In 2020, one of the hottest years on record with climate awareness at an apex, Pakistan spent the majority of its stimulus package on construction and real estate. This prioritization of funds encapsulates the issue plaguing our climate change response.