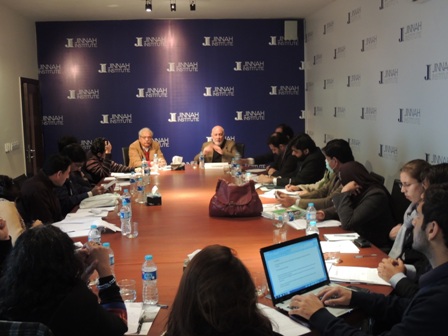 Multi-party consensus in Pakistan to move beyond India stalemate

Islamabad – February 7,2014: A vital and crosscutting multi-party consensus exists in Pakistan with regard to improving relations with India, and this presents a unique opportunity for those seeking to build peace between the two nuclear armed neighbours. The upcoming Indian election, however, will determine whether any forward movement is possible in bilateral relations. There is a sense that the resumption of the bilateral dialogue is not possible until after the election.

This was stated by participants addressing a debriefing session organized at Jinnah Institute, in which attendees of the 13th Chaophraya Dialogue discussed Indo-Pak bilateral relations. Speaking on the occasion, Jinnah Institute Vice President Ambassador Aziz Ahmad Khan explained that recommendations from the 13th Chaophraya Resolution were important tools to inform public policy and mainstream opinion in Pakistan. He stated that intensifying the dialogue process was the only way to overcome obstacles in bilateral policy change on both sides. He explained that the Chaophraya Dialogue is the second oldest Track II process running between India and Pakistan and the last round addressed nuclear issues, Afghanistan and reviewed developments across the LoC over the last few months. The Dialogue brought together senior interlocutors who are able to impact foreign policy in both Islamabad and New Delhi.

Speaking on the occasion, columnist and development consultant Mosharraf Zaidi stated that the issue of Afghanistan had critical

importance for the region. He maintained that while India had growing economic interests in Afghanistan, Pakistan had a far greater stake in stability and security of that country in light of the drawdown of international forces. However, he cautioned that exaggerated perceptions of Indian involvement in Afghanistan have caused undue alarm. He also stated that the Track II discussions brought up indicators of human development in Afghanistan, and that social safety interventions, such as the BISP, can be designed in Afghanistan to improve the lives of its citizens.

Author and senior journalist Zahid Hussain, observed that despite India’s strategic distrust with China, the two regional rivals enjoyed twice the volume of trade than India and Pakistan. He told the audience that the aim of the Chaophraya Dialogue was essentially to create an enabling environment for government to government negotiations to get underway. On the issue of Afghanistan, Zahid Hussain stated that both countries will have to make a concerted effort to ensure a peaceful transition in the region, while cautioning that the Durand Line may vanish if insurgency inside Afghanistan does not cease. He explained that there has been an appreciable change in the perception about India, best reflected in how “India-bashing” was not a feature of last year’s election campaign.