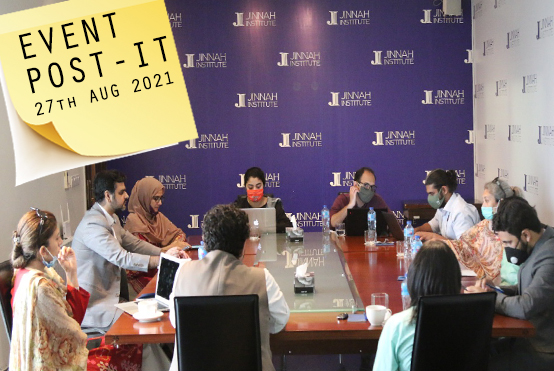 Prospects for Diplomatic Engagement between India and Pakistan

Indo-Pak relations remain hostile despite de-escalation across the LoC earlier this year, as well as other attempts to normalize ties. As the region absorbs the transition spillover from Afghanistan, both New Delhi and Islamabad are viewing developments very differently. Is this an opportune time for both countries to review their bilateral policy in South Asia’s favour? Strategic flux in the region can provide space for proactive diplomacy and leadership on a host of common challenges, but what incentives do India or Pakistan have to find common cause? Jinnah Institute convened a roundtable with policy experts on August 27, 2021 titled, ‘Prospects for Diplomatic Engagement between India and Pakistan’ and asked them how they saw the bilateral relationship and its delimitation for South Asia’s progress.

Partcipants stated that the door for bilateral outreach was open as indicated numerous times by the PTI government, but in pursuing this, Pakistan would have to proceed with clarity on its own foreign policy interests. There was unanimous agreement on there being no compromise on Pakistan’s principal stance on the Kashmir issue. “Backchannel” efforts had only been partially effective in producing an environment for normalizing relations, which has brought about a significant decrease in LoC violations. However, they felt that the BJP’s jingoism had perhaps permanently altered the bandwidth for diplomatic exchange, and reset the terms of engagement between India and its neighbours. There is no political momentum in the Indian mainstream that can challenge this. Participants also argued that that there was no compulsion on Pakistan to keep the door open for talks with India. A hardened posture had led to positive results in the past, and until it provided evidence of its seriousness in finding compromises on outstanding issues.

Participants recommended that Pakistan must continue to highlight the human rights abuses being carried out in Kashmir. There may be policy fatigue, but toning down the rhetoric can be interpreted as Pakistan’s acquiescence to India’s unilateral move to annex Kashmir. Islamabad’s stance to expose New Delhi’s transgressions against Kashmiris and Indian Muslims after August 5, 2019 have to be accelerated. They acknowledged that the government had undertaken proactive messaging on the Kashmir issue, and raised it at the right platforms for two years. A “lack of options” should not mean giving up on raising the issue.

They discussed India’s month-long presidency of the UNSC in August, in which Pakistan had been barred from speaking on key topics. Furthermore, the UN had referred to Kashmir as a disputed region, but not an occupation because that could imply binding legal ramifications. The only state referring to Kashmir as occupied territory is Pakistan. They suggested that Pakistani decisionmakers should open up the India debate internally and build domestic consensus on the path ahead. We must not view nor treat the Kashmiris as pawns for politics, and attempt to improve our perception in Occupied Kashmir as well; we cannot uphold their freedom from the occupier and impose ourselves on them. It is high time this is amplified and the Kashmiris are given an equal stake and say in this decision about what they want, freedom from any occupation and the right to complete self-determination.