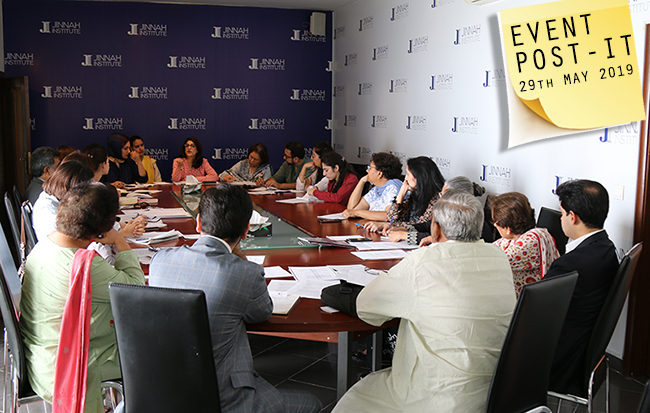 The alarming rise in reported incidents of child sexual abuse and child marriage cases in Pakistan is an urgent call to action for politicians, practitioners, media persons and citizens to collectively work towards preventive and punitive measures that tackle the challenge of child abuse, stated participants at Jinnah Institute’s Roundtable on 29th May 2019 titled ‘Protecting Our Children: Supportive Legislative and Civil Society Action’.

Parliamentarians at the roundtable revealed that legislators often face an uphill task in finding support for human rights legislation in parliament, such as the newly tabled Islamabad Capital Territory Domestic Workers Act (2019). Backing from civil society groups and media can generate critical pressure for policy reform in parliament, as well as holding governments and state institutions accountable for inadequacies or failure. They noted that recent cases of child sexual abuse have made it abundantly clear that state responses can exacerbate the suffering of victims and their families, let alone provide timely rescue and assistance. They recalled that a National Commission on Child Rights had to be set up in 2017 – following the Zainab Ansari case – but two years have passed and the Commission’s rules of procedure and nomination of members is still subject to provincial governments’ indolence and political delay. They recommended that a special committee for child protection be constituted in the National Assembly that can review and assist cases of child sexual abuse. In addition, the Women’s Parliamentary Caucus may be used as a platform to further the gender and child rights agenda. Civil society members at the event requested media persons to publish news articles and disseminate information on child rights challenges to create awareness and enable preventive action.

Participants observed that child abuse has traditionally been dealt with as a rights issue, but child sexual abuse as well as child marriage presents a veritable public health crisis. It may do well to approach the issue of child marriage from a healthcare perspective to convince community leaders and other stakeholders to enforce the marriage age at 18 or above. Children’s health is in severe danger when they give birth much before they turn 18, as it commonly results in high maternal and infant mortality rates, miscarriages and malnutrition. The Marriage Restraint (Amendment) Act (2019) submitted earlier this year specifically calls for setting the minimum age at 18 years, but is pending approval from a parliamentary standing committee.

Participants observed that Pakistan has long been a signatory to the Convention on the Rights of Child that sets the age of a child at 18 years. But legislative frameworks in both provincial and federal governments have overlooked this repeatedly, resulting in laws that fail to criminalize child marriage, child labour or domestic work, and provide little protection from sexual abuse for those under the age of 18.They also pointed out that legislation is only the first step in creating visible and sustainable change, but implementing the same laws to impact change on the ground demands far greater effort by stakeholders.

They noted that the government was treading dangerous territory vis a vis declaring the death penalty as a punishment for child abuse, as it leads to desensitization of people towards loss of life and does not act as a deterrent for others. Since the hanging of Zainab Ansari’s rapist and killer in November 2018, the number of cases reported had gone up by 13 percent. They agreed that the problem must be addressed at the grass root level through lobbying for child rights and by conducting a national awareness campaign with the aid of media, political and religious actors, and law enforcement agencies.

Mediapersons participating in the discussion stated that mainstreaming a policy issue like child abuse on talk shows required assistance from prominent politicians. Unfortunately, topics that garner television ratings are ones that involve political content. One way to mainstream such a crucial topic is for senior politicians themselves to initiate public discourse on the issue, as has been done over social media. They felt that the role of electronic media in raising awareness is more important as it can penetrate all levels of society consuming information. If civil society organizations can provide curated data to media persons, a sustained campaign on child rights can be undertaken that assists legislative reform and audit of government action.