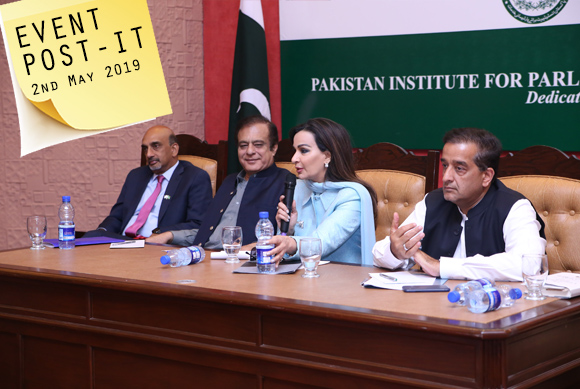 The scale of challenges presented by climate requires legislators to devise collective agency and lead the charge on climate adaptation across Pakistan, stated Senator Sherry Rehman at a public hearing organized by the Senate Caucus for Climate Change supported by Jinnah Institute and held at Pakistan Institute of Parliamentary Services (PIPS).

Senator Rehman informed that the Senate Caucus was set up with a view to convening high powered stakeholders and advocating urgent action on climate change that cuts across federal and provincial mandates. She stressed that climate indicators were worsening in Pakistan, and should not be taken as statistics alone, as they were impacting lives, livelihoods and survival for citizens everyday. Hazardous air quality has claimed more lives in 2016 alone than the war on terror; more than 5 million people are forced to live through drought conditions; disasters have cost upto $2 billion each year on average over the last two decades and Pakistan’s carbon emissions have quadrupled in 15 years. She appreciated the growing interest and participation of legislators at the Caucus, who are generating scrutiny around climate policies, and championing issues like reduced plastic usage and improving ambient air quality from the Caucus platform. Senator Rehman concluded by saying that climate change requires coordinated responses by stakeholders that go beyond bland analyses of policy frameworks, and within that, the roles of government, parliament, civil society and citizens are all critical.

Special Advisor to PM on Climate Change, Mr. Malik Amin Aslam stated that politics is lagging far behind the science of climate change, which has repeatedly shown the imminent dangers of increasing global temperatures. He informed that the Shishpar glacier in Gilgit-Baltistan has receded by 3 kilometres in 6 months, due to heat generated in another part of the world, but with catastrophic local impact. Pakistan is the 8th most vulnerable country to climate degradation, but its policies alone are no safeguard against deteriorating environmental conditions. Among other initiatives undertaken by the PTI government to combat climate impacts, is the Billion Tree Tsunami reforestation effort aimed at carbon sequestration which has been lauded by environmental auditors.

World Bank Country Director, Patchamuthu Illangovan commended the Caucus and Jinnah Institute for bringing a critical mass of legislators on board for climate action. He presented a comparison between Pakistan and other less developed countries that have upgraded their water and environmental management systems. “Pakistan devotes 90 percent of its water to five agricultural products (rice, sugarcane, cotton, wheat and maize) that generate less than 20 percent of GDP,” he informed, stressing that policy planners need to re-orient water practices to cut back losses and potentially transform Pakistan into a $2 trillion economy through improved water management. Illangovan also stated that Pakistan’s youthful population must be leveraged to create human resource advantages in the coming years, as young people can become champions of managing and protecting the environment.

Amhad Rafay Alam, environmental lawyer and activist, stressed that integrated environmental policies must not mean centralization of devolved powers back from the provinces to Islamabad. “An executive coordination role must be played by federal authorities to assist the provinces in implementing their climate mandates,” he said, adding that the National Climate Change Policy notified in 2012 had run its course and should be replaced with a policy framework informed by later day evidence and practice. Furthermore, the Climate Change Act of 2017 asks for the establishment of both a Climate Change Council and Authority, and neither has been set up thus far. Rafay Alam argued that the plantation of trees was a welcome step, but cannot realistically address the challenge of increasing temperatures, nor sequester carbon at the rate at which it is being produced in the atmosphere. “150 million deaths will take still take place across the globe from climate induced stress, even if we maintain temperature increase between 1.5 and 2 degrees,” he shared with the audience.

Senator Shibli Faraz, leader of the Senate made brief remarks appreciating the efforts of the Caucus, and the importance of collective action in combating climate change. The panel interventions were followed by questions and comments from members of the audience, including parliamentarians, civil society members and citizens.