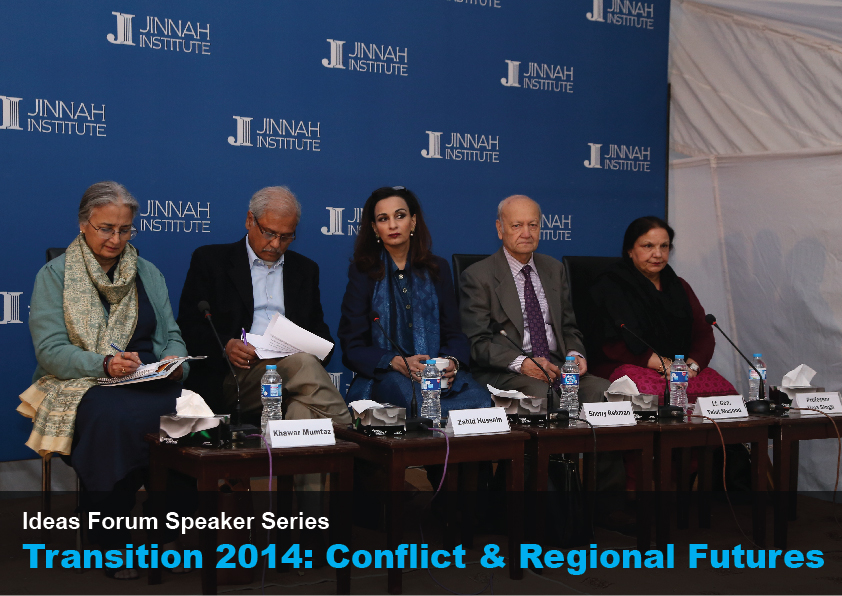 ISLAMABAD – 27 February 2014: As Pakistan prepares to weather the darkest moment of its terrorist challenge, there is a real danger that international and regional conflict trends in the country’s external vicinity could lead to a ‘perfect storm’. This was the cautionary assessment of Jinnah Institute President and former Ambassador to the United States Sherry Rehman at the Jinnah Institute’s Ideas Forum on Thursday.

Speaking to a distinguished audience of policy makers, ambassadors, media-persons and foreign diplomats at the Jinnah Institute, Sherry Rehman explained that Pakistan’s democratic consolidation remained a moment of opportunity, and it was in this context that mainstream consensus on key policy drivers was crucial. Shifting the regional game with India in terms of peace and trade instead of conflict and crisis management was one. Moving away from the ball and chain of the strategic depth or avoiding power brokering in Afghanistan by seeking no favorites was another. She observed that these were two important policy shifts that had remained strategically consistent across two civilian governments, reflecting the maturity of the mainstream.

Describing the cohesion of the Afghan state as a serious challenge for regional security beyond 2014, the former ambassador maintained that by not signing the Bilateral Security Agreement, the Afghan leadership was only adding to the uncertainty of the regional transition. “For the timebeing, nobody knows who will pay for Afghanistan, and how gains made will be protected,” she said. “Afghan stability is crucial to Pakistan’s well-being, and estimates point to sub-optimal futures.”

In her keynote address, Sherry Rehman also touched upon the transnational nature of violent conflict in South and Central Asia, and how  how the spillover of refugees, narcotics and arms were dangerous triggers that could destabilize the region even further.

“The re-emergence and flow of narcotics from Afghanistan is another crisis Pakistan may well have to face alone,” she said, adding that “in anticipation of heightened volatility next door, the refugee inflow has already begun. Pakistan has been asked to brace for impact.”
She said however, “that by no means is conflict in Pakistan the result of contagion from other countries”, arguing that Pakistan has to take responsibility for its challenges, and plan for action. The numbers tell a very sobering story. Pakistan is facing a scale of violence that has surpassed Iraq and Afghanistan in 2012; and that at this crucial stage, at no step should the government face partisan divides. Its time to up the policy game.”

including Ms. Khawar Mumtaz, Lt. General (retired) Talat Masood, senior journalist Zahid Hussain, and visiting Jawaharlal Nehru University scholar and lecturer Professor Uma Singh. Commenting on security and regional stability, Zahid Hussain argued that without any negotiated political mechanism in place, the drawdown in Afghanistan would plunge that country into a fierce contest between tribal factions over territory and population. He added that this had the potential of pushing surrounding countries deeper into conflict. A major challenge for the alliance, therefore, was finding a way to wind down the war and reduce violence, while also preventing a greater descent into anarchy.

On the subject of women, refugees and minorities, Ms. Khawar Mumtaz asserted that women and marginalised communities were especially vulnerable in conflict and crisis situations. She explained that young women and girls are nearly always on the receiving end of collateral fallout, and hence special care and safeguards were needed for these vulnerable groups and their mobility, education and access to services as the region braced for transition in 2014.

Lt. General Talat Masood highlighted the evolving geopolitical dynamic in Pakistan’s wider neighbourhood and explained that the power dynamic between Saudi Arabia, Iran, Turkey and Russia was in a state of flux. He emphasized that Pakistan’s foreign relations and policies towards these external powers would carry implications for internal security, as well as regional stability.

Jawaharlal Nehru University scholar Professor Uma Singh discussed the upcoming Indian election in May and the implications of a potential BJP win on India’s policy towards Pakistan. She explained that Narendra Modi’s hawkish credentials had led to speculation of an aggressive and muscular foreign policy vis-à-vis Pakistan, but added that there was also the possibility of some positive changes in the terms of engagement between the two countries.