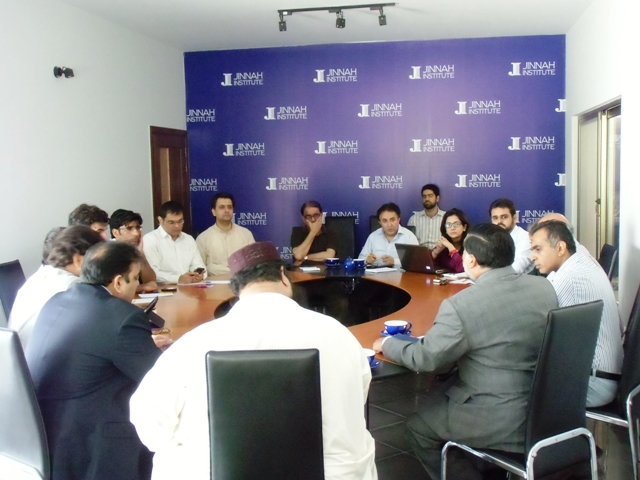 Reversing the Tide of Sectarian Violence

Islamabad, 30 August 2012: The state of Pakistan is threatened by those who commit violence and murder in the name of religion said Maulana Tahir Ashrafi of the All Pakistan Ulema Council at a Roundtable organized by the Jinnah Institute on Reversing the Tide of Sectarian Violence in Pakistan. He distributed copies of a compilation of Fatwas by Pakistan’s leading religious schools condemning and declaring un-Islamic the murder of unarmed civilians of any sect or religion. He urged the organs of the state to clamp down on the activities, particularly the fundraising efforts of banned militant outfits.

Imtiaz Gul, security analyst stated that Shia killings threatened the very foundations of Pakistan. He claimed that political and state actors are more concerned about political mileage and expediency rather than curbing the wanton killings. He claimed that there is a radical mindset within the judiciary and bureaucracy that provides protection and patronage to extremist outfits. He cited examples of land allocated to green belts in Islamabad being handed over to seminaries and mosques even though no construction was permitted in these areas. He said that until we are able to finish the culture of protecting and patronizing the groups involved in spreading sectarian hatred – we will not be able to end the growing levels of faith-based violence in Pakistan.

“State’s capacity to manage policing and public prosecution departments in an effective way was a key issue in Shia killings”, said Dr. Ayesha Siddiqa. She urged for the empowerment of law enforcement agencies so that they could take on powerful and armed groups responsible for sectarian violence. She also said that civil society in Pakistan needs to engage with Islamic jurisprudence and discourse and find inherent messages of peace and pluralism in order to change public mindset on the issue of sectarianism, violence, terrorism and militancy.

Fawad Chaudhry, Adviser to the Prime Minister on Human Rights, reiterated the government’s commitment to fighting extremism and militancy in the country but he also highlighted the high risks faced by public officials in the line of duty. He acknowledged that an atmosphere of fear exists in society and in the public sector due to recent violent events. He also claimed that the current parliament had enacted unprecedented legislation on human rights.

Tahira Abdullah, Human Rights activist noted that it is not just fear but also the lack of unity amongst civil society that prevents them

from coming together as one cohesive unit that is capable of demanding change. She said that the Rimsha Masih case, is a test case for the Pakistani state and civil society. She urged all members of civil society to come out and stand in support of Rimsha Masih in order to show that the average Pakistani is united in their resolve to stand up for minorities and vulnerable groups.

Farman Ali, resident Editor at the Express Tribune said that the judiciary needed to play a more active role in clamping down on and punishing extremist and sectarian outfits operating with impunity across the country and even in the Federal capital. He also referred to the economic underpinnings of violence in Gilgit-Baltistan and elsewhere and called for a review of state policy in this arena.

Justice (rtd) Ali Nawaz Chohan, said that while judges do operate in an environment of fear and with minimum resources, writing judgments that were in accordance to the law of the land without letting fear dictate their pronouncements was their duty. He said he had authored two judgments in favor of people incorrectly accused for blasphemy and his judgments without any harm to him, his family or property. He said the judgments are now a part of Pakistani case law. He urged the present judicial leadership to refer to them for context.

Nadir Hassan, columnist, noted that sectarian violence has been treated as a law and order issue for too long while it is one of political identity. He said that while there is a need to address weaknesses in the system of law enforcement; growing sectarian violence in Pakistan stems from increasing political schisms between groups for control of land and resources as well as identity and therefore this issue required a political solution based on political consensus.

Dr. Farzana Bari, an academic-activist said that growing intolerance and violence towards minorities stems from an increasingly biased and sectarian discourse being pedaled in society which needs to change. She urged civil society and media to come together to develop a roadmap for developing a more plural and tolerant public discourse in order to end sectarian strife in the country.

Raza Rumi, Director Policy Jinnah Institute concluding the discussion said that a short-to medium term set of recommendations will be made to the government and civil society actors. In the short term, focus on state capacity for law enforcement and deradicalsiation was required and in the medium to long term Pakistan had to move towards a plural, inclusive state as envisioned by Jinnah. In the meantime, Shia killings had to be stopped through stern state action.