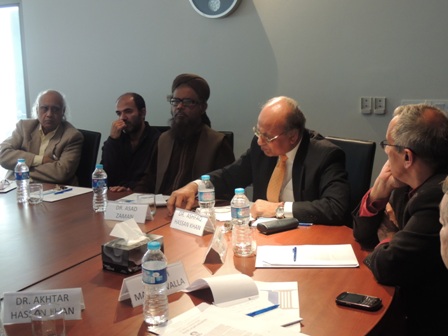 ISLAMABAD – February 20, 2014: A roundtable discussion on “Privatising Public Enterprises” concluded with the participants advocating the necessity of reviewing the government’s privatization policy, as well as challenging the perceived wisdom regarding the sale of state sector organisations. The event, organized by the Jinnah Institute was attended by a number of senior economists, journalists and parliamentarians.

The event was organised as part of the Jinnah Institute’s Open Democracy Initiative, which aims to bridge the gap between citizens and state and to formulate and articulate policy responses based on inclusive research.
Starting the discussion, former secretary of the Privatisation Commission, Dr.AkhtarHasan Khan, said that the average growth rate during the decades of the 90s and 2000s was 4%, demonstrating that privatisation did not lead to economic growth. He also critiqued the government’s decision to include the CAA, KPT and NHA in its list of privatisation targets, arguing that these could not be privatised since they are either regulatory authorities or critical public service providers.

Prominent economist and academic Dr. Akbar Zaidi,called for rethinking the whole process of privatisation. He said that the fiscal deficit argument in favour of privatisation did not hold ground because the majority of public sector enterprises (PSEs) on the list of privatisation were profitable. Instead of selling profitable enterprises, Dr.Zaidi advised the government to focus on implementing tax reforms to resolve the fiscal deficit crises. Dr. Zaidi questioned the idea that loss-making public sector organisations needed to be sold in order to become profitable, and argued for pursuing reform and restructuring instead. He cited the example of the state-led turnaround of the Indian Railways as proof of governments being able to steer large, unwieldy organisations towards efficiency and profitability.He also pointed out that the Steel Mills were profitable in the early 2000s, and argued that both examples showed that ownership does not determine profitability.

Similar scepticism was also expressed by Professor AsadZaman, the Vice Chancellor of PIDE. He noted that there was no empirical evidence to support the argument that private sector was better able to manage organisations.He said that companies which buy loss making PSEs would only do so to strip their assets and make a profit. Dr Zaidi agreed and noted that more than a dozen privatised units were now closed.

Former Finance Minister Senator SaleemMandviwala said that he supported the selective privatisation of those PSEs which were consistently making a loss. However, he lamented the fact that despite the privatisation of state owned enterprises being debated in both houses of the Parliament, the PML-N government’s finance and planning commission ministers had not attended parliament sessions and were yet to address questions raised by opposition members. He recommended that joint-ventures between private firms and the state be pursued instead.

Many of the attendees expressed their concern at how existing state-owned enterprises were being run, with several sharing anecdotes of incompetent management and inefficient services. Others also cited the examples of organisations like the Steel Mills and PIA which are overstaffed and inefficient. Television anchor and journalist Mohammad Malick critiqued the lack of accountability in the public sector, noting that while poor performance in the private sector led to lay-offs, it only resulted in transfers for under-performing employees in PSEs.

The argument for privatisation was furthered by Dr. Ashfaq Hassan Khan, the dean of the NUST business school. He argued that the government was not responsible for giving out jobs and should not be in the business of doing business. He agreed with the observation that the list of institutions earmarked for privatisation demonstrated a lack of understanding by the government, but made a strong case for privatising those entities that are loss making. He also criticised the partisan nature of the board of the Privatisation Commission and called for strengthening regulatory bodies before privatisation to avoid future monopolies.

There was also considerable debate over what expectations were associated with the privatisation process. The academic and political activist Dr. Aasim Sajjad Akhtar argued that the privatisation debate should be enhanced to discuss the larger concern of what the role of the state was, and the government’s responsibility to provide public goods to its citizens.