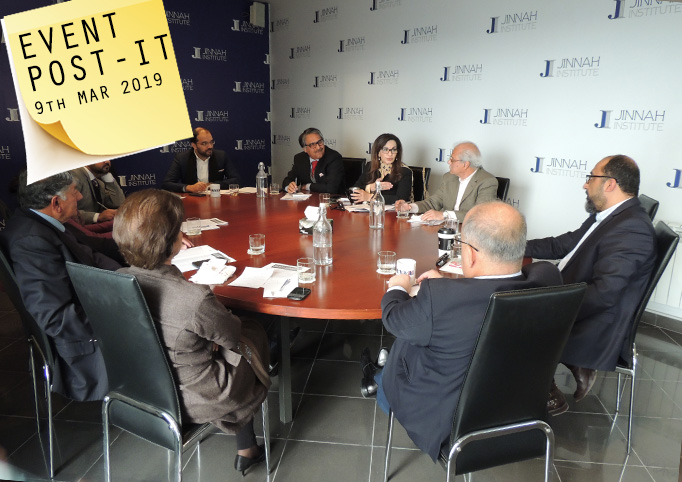 In a closed-door round table focused on lessons from the Balakot 26.03 crisis and pathways for de-escalation in the weeks ahead, Jinnah Institute convened a group of foreign policy thought leaders on Thursday, March 7. The round table was chaired by President Jinnah Institute Senator Sherry Rehman and included former foreign secretaries RiazKhokhar, Salman Bashir, Jalil Abbas Jilani and senior analysts ZahidHussain, Mosharraf Zaidi, Mariana Babar, and General (r) Talat Masood.

Key Takeaway
The participants appreciated Pakistan’s effective political and military response to the India-Pakistan crisis emphasizing that the demonstration of political unity combined with an effective military response was critical to deter future Indian attempts at escalatory aggression. The facts of the last two weeks were discussed in detail including the impact of the first Indian airstrikes in Pakistan and the response. Participants underscored that there was miscalculation on the part of the Indian leadership on Pakistan’s response resolve and capability. They agreed that the retaliatory strikes and subsequent air action caught India off-guard. It was assessed that the downing of IAF aircrafts and the arrest of Wing Commander Abhinandan stalled expected escalatory measures by Indian.

Diplomatic Front
Deliberating on the reaction of important global countries to the Pulwama attack and the subsequent Indian aggression on Pakistan, thought leaders agreed that the delay in world response to the crisis and their lack of condemnation for Indian action raised significant concerns. It was agreed that Pakistan’s decision to release Wing Commander Abhinandan was an internal decision. However, participants discussed in detail the role of the US, Saudi Arabia, China and the United Kingdom in the crisis.
It was emphasized that Pakistan must redouble its efforts at the world stage to highlight the liberal interpretation of UN Article 51 by India which sought to couch its blatant aggression as a pre-emptive non-military strike. Participants noted that such wide interpretations will lead to serious repercussions for the international order. It was also agreed that Pakistan must be active in blunting an expected Indian diplomatic offensive in the coming months. Two areas stood out. The first was an expected Indian push for UN listing of Masood Azhar, the FATF and India’s attempts to use all multilateral forums to push its anti-Pakistan narrative.

Crackdown on Non-State Actors
While discussing the on-going crackdown against proscribed organizations the sense prevailed that Pakistan was taking concrete actions under the National Action Plan to take over several seminaries, dispensaries and other outlets run by proscribed organizations or their supporters. It was agreed that India’s Pulwama dossier contained very little intelligence based actionable evidence and instead relied largely on press clipping and publicly available information that did not support India’s earlier claims of direct involvement from Pakistan. Nevertheless, participants agreed that concrete action against proscribed organizations was in Pakistan’s benefit and should be pursued vigorously.

Pathways Ahead
It was agreed that Pakistan’s peace overtures to India reflected a unanimity of thought in Pakistan on improving relations with India and ensuring de-escalation. However, India’s response was likely to remain muted in the coming weeks as India’s political parties canvass for the upcoming elections. It was agreed that despite Indian attempts to divert attention from the Kashmir issue by raising the specter of terrorism, the plight of the Kashmiris had resonated with the world community. However, greater efforts were needed from Pakistan to continue to diplomatically push for a resolution of the Kashmir issue in line with the wishes of the people of Kashmir. Participants agreed that with India’s consideration of revoking Article 35A and Article 370, the Kashmiri struggle was likely to remain heated in the run of to the elections and thereafter. However, it was hoped that post-election, the incoming Indian government would consider restarting dialogue with Pakistan as dialogue, as in the case of Afghanistan, remained the only viable alternative for the two nuclear armed nations.