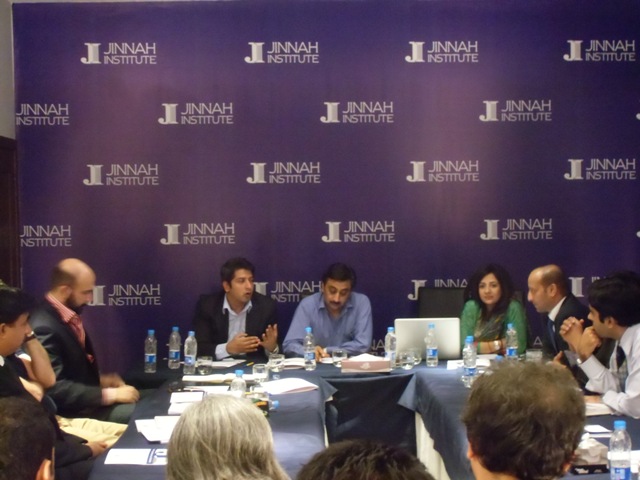 Roundtable on Freedom of Expression on the Internet

Islamabad, 25 September 2012: The internet is a unique medium that presents new challenges and questions for Pakistani state and society, especially when dealing with issues like the YouTube video that sparked violent protests across the Muslim world. This was the view of participants at a roundtable on free expression on the internet in Pakistan and its limits, organized jointly by the Jinnah Institute and the Initiative on Internet & Society at the Lahore University of Management Sciences.
The session began with a presentation AbidHussain Imam of the Department of Law and Policy at LUMS on laws and conventions that apply to the internet in Pakistan. Professor Imam highlighted the unique nature of the internet as a medium, and how it is not forced on the consumer of information. Rather, the consumer has to actively seek content on the internet, which raises interesting questions about liability and responsibility.
The presentation was followed by a lively discussion on the issue, in which many participants agreed that freedom of speech is not an absolute value and its interpretations vary across societies and cultures. These variations require states and companies to come up with appropriate legal and policy responses to ensure respect for all individuals and communities and protect them against hate speech and incendiary content.
Participants included academics, lawyers, government officials, students, civil society activists, journalists, technologists and entrepreneurs.
The discussion was focused on the internet and law in Pakistan, and participants suggested policy measures to assist the

government in handling internet-related issues. Officials from the Pakistan Telecommunication Authority discussed their organization’s mandate and how decisions are made on internet-related issues by the government. The current system’s shortcomings and possible remedies were discussed.
DrAdilNajam, Vice Chancellor of LUMS, said that the “Internet is changing -Pakistani society vis-a-vis governance, law, civil society, etc,” and asked if there should be an international law against blasphemy, given that the internet is not hindered by geographical boundaries. Ahmer Bilal Soofi, a prominent international law expert stressed the need to look at international conventions such as Article 20 of the International Covenant on Civil and Political Rights which states: “Any advocacy of national, racial or religious hatred that constitutes incitement to discrimination, hostility or violence shall be prohibited by law.”
The discussion also looked at the mechanisms through which states can interact with companies with international reach like Google and Facebook, and how laws are applied in this environment.
Raza Rumi, director of policy and programmes at the Jinnah Institute, highlighted another dimension of the debate, looking at hate material being published by Pakistanis against other Pakistanis. “A large number of consumers of the global Jihad industry are located in South Asia. Banned outfits using the social media call for devolution of Pakistani state since, according to them, it has succumbed to the US-imperialist-Zionist model”. There are concerted campaigns on the social media to silence moderate voices and many such people are under threat, he said, and that this aspect of the issue also needs attention.

Participants agreed that blanket censorship of the internet is a violation of fundamental human rights as Article 19A of the Constitution of Pakistan says “every citizen shall have the right to have access to information in all matters of public importance subject to regulation and reasonable restrictions imposed by law.”
Jinnah Institute is a non-profit public policy organization based in Pakistan. It functions as a think tank, advocacy group and public outreach organization independent of government. JI seeks to promote knowledge-based policy making for strengthening democratic institutions and building public stakes in human and national security discourse. It remains committed to investing in policies that promote fundamental rights, tolerance and pluralism.