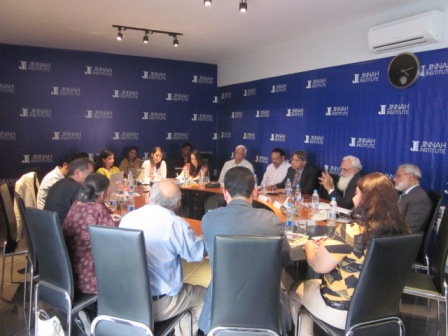 October 23, 2012 ISLAMABAD: The textbooks used in Pakistan’s schools today are rife with factual errors, bias and hate towards a number of religious groups and nations. This is helping fuel the increasing levels of intolerance and extremism being witnessed by Pakistani society today. Given that increasing extremism poses an existential threat to Pakistan; the government, civil society, education experts and citizens all need to contribute to a serious process of curriculum and textbook reform to help combat the growing levels of intolerance and violence towards minority groups in society. This was the view of participants at a roundtable discussion on curriculum development and textbook reform in Pakistan, organised by the Jinnah Institute in collaboration with the National Commission for Justice and Peace in Islamabad.
Raza Rumi, Director of Policy and Programmes at the Jinnah Institute, opened the discussion by highlighting the urgent need for curriculum and textbook reform to achieve a more tolerant and peaceful Pakistan. Mr. Rumi also pointed out that cooperation between all stakeholders in the education sector is required to achieve better policy outcomes, and the Jinnah Institute roundtable is an effort towards that. “We need to find a balance between civil society and government initiatives so that important and innovative solutions to curriculum-related issues can be implemented,” Mr. Rumi said.
Mr. Peter Jacob, Executive Director of the National Commission for Justice and Peace shared NCJP’s report on biases in our textbooks and highlighted examples of hate material in Pakistani textbooks, and how such material not only impacts negatively the minds of the majority Muslim students, but also harms the education and growth of non-Muslim students. Participants also highlighted how the religion of many non-Muslim students – Christians, Sikhs, Hindus and Muslims from the non-majority sects – is ignored while highlighting the majority faith.
Mirza Ashraf, a senior official of the Punjab provincial government’s textbook board, outlined the process of commissioning, writing and approving textbooks. Participants felt the need for devising policy and advocacy interventions for correcting hate material and stressed that a concerted effort needs to be made to review the subtle messages in educational materials with respect to minorities’ and women’s rights, and the freedom of religion and speech.
Haider Abbas Rizvi, deputy parliamentary leader of the MuttahidaQaumi Movement (MQM) in Pakistan’s National Assembly, spoke about the damage caused to Pakistani minds by an education system that teaches them a falsified version of history. “When students come out of this system and independently look at the world, their minds are struck by the contradictions. Many reject both, then, and become part of a confused generation,” Mr. Rizvi said, adding that he will pursue the matter with the education minister in the Sindh province, where his party is a member of the coalition government.
Samson Sharaf of the Pakistan Tehreek-e-Insaf (PTI) detailed the persecution of non-Muslim Pakistanis over two decades, and how Christians and Hindus, the largest non-Muslim communities in the country, have been discriminated against and deprived of the opportunity to live as full citizens of Pakistan through a flawed and biased education system.
Through a consultative process and by engaging a variety of stakeholders, the Jinnah Institute hopes to develop dialogue and momentum for a comprehensive review of Pakistani curricula and textbooks that will help create a more tolerant and peaceful Pakistan.
Other participants included Zafarullah Khan, Centre for Civic Education, MarviSirmed, Human Rights Activist, FauziaMinallah, Rights Activist, MalikaRaza, PTI Policy Group, Patras Bhatti, St. Marys Academy, Tariq Aqeel, Head Start School, Nadine Murtaza, Head Start School, among others.