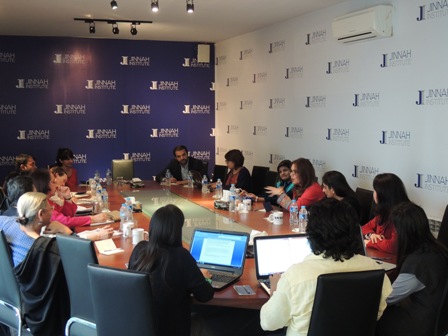 A focus on developing mentorship opportunities and removing barriers to entry should guide state policymaking with regards to women entrepreneurs. This was the consensus claim that emerged from a roundtable discussion on the potential and scope for women businessowners.

The event, organized and hosted by the Jinnah Institute, brought together women from across varying fields, including restaurant owners, presidents of Chambers of Commerce, CEOs,policy consultants and human right activists.

The wide-ranging discussion focused on a range of topics, including the development and evolution of women-only chambers of commerce; the barriers towards providing women with the access and skills needed to succeed in running businesses; the impact of having mentors, and the drawback of glass ceilings for women in top management positions.
Simi Kamal, spoke of the importance for Pakistani to utilize its “demographic dividend” – a term used to describe the potential advantage of having a large percentage of the youth in a population. She emphasized the need to develop and expand the ambitions of young Pakistanis, which she noted were often limited to securing steady employment.
Restaurateur Zeenat Ayesha built upon similar ideas and suggested developing internship programs which allow young people to gain experience working with seasoned entrepreneurs. Other participants also stressed on the importance of incubation programs for businesses, which could help develop ideas into enterprises.

The impact of mentorship and capacity-building was emphasized in the personal experiences of Sidra Qasim, who is the co-founder of Markhor – a shoe manufacturing business. Hailing from a middle-class family in Okara, she spoke to the social and cultural obstacles she faced and described her journey from her humble beginnings to the development of a highly successful international brand. She emphasized the beneficial impact of finding someone who served to direct her and underlined the importance of the continuous support and insights provided by a mentor.

Activist Naghma Imdad expanded on the need to develop an enabling environment for women entrepreneurs, and drew upon her experiences to warn against letting literacy and social class becoming barriers for women seeking skills and opportunities. Her idea was taken further by policy specialist Ammara Durrani who criticized the dearth of data available on women entrepreneurs, and suggested the setting of a national agenda for the inclusion of women into entrepreneurship. She also stressed the importance of highlighting stories and narratives regarding women in entrepreneurship, and noted that women preferred to join the services industry rather than setting up their own businesses.

Her observations were seconded by Rukhsana Rashid, who noted that the Pakistani Government’s Vision 2025 lacked any policies regarding women in businesses. She also seconded the idea of the demographic dividend and shared her experiences of working with young students. The discussion then focused on the topic of mentorship, and provided several strategies for future actions. These included connecting women entrepreneur’s through virtual means, developing dedicated courses and modules in universities and business schools and continuing to back efforts for the promotion of women in the workplace.

Representatives of the women chamber of commerce spoke at the event, and shared experiences of running and developing a successful business, and stressed upon the need for women to raise their own children with broad views of what both genders could achieve.

The discussion also noted the various barriers and obstacles faced by women, and highlighted the need for legislative advocacy in several areas. The difficulties faced by women entrepreneurs in obtaining loans and opportunities without the presence of males was severely criticized, and it was seen as testament to the procedural changes needed across society. Similarly, the lack of opportunities being provided to women in rural areas – which represents the majority of the country – was also identified as an existing policy gap.

The participants then sought to develop the outline for an agenda on the matter and noted four main areas for further efforts. These were the establishment of mentorship and business incubation opportunities; the creation of an enabling ecosystem for women across public and private sectors as well as complementary institutions; the gathering and dissemination of data on the subject; and ensuring that rural and illiterate candidates are not excluded from skill-building initiatives.

The event was part of the Jinnah Institute’s Open Democracy Initiative (ODI), which seeks to bridge the gap between citizens and state and to formulate and articulate policy responses based on inclusive research. The Jinnah Institute is a non-profit public policy organization based in Pakistan. It functions as a think tank, advocacy group and public outreach organization.