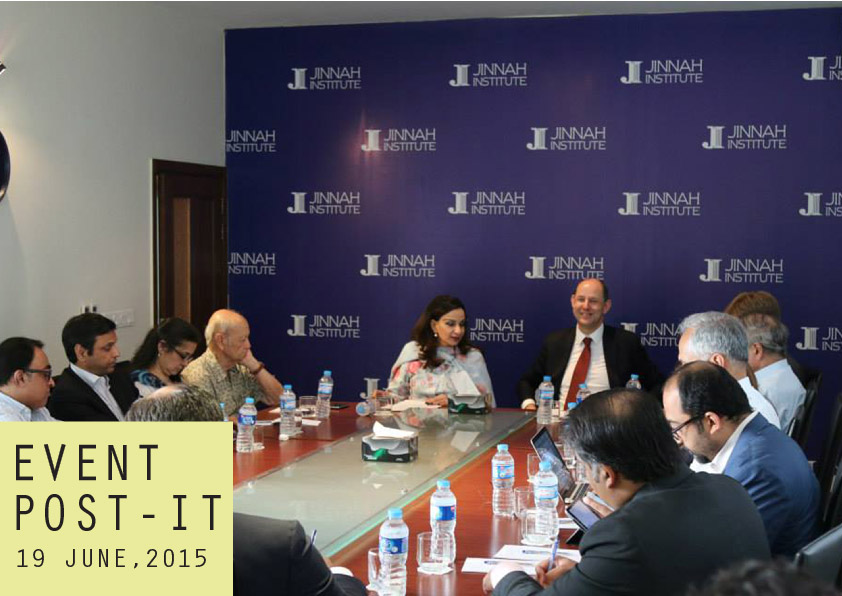 Opportunities and Challenges in South Asia – the UK Perspective

Senior diplomats, policymakers and journalists came together for a closed-door roundtable at Jinnah Institute (JI), titled ‘Opportunities and Challenges in South Asia – the UK Perspective’ with British High Commissioner H.E. Mr. Philip Barton on 19th June 2015. The objective of the discussion, led by JI President Senator Sherry Rehman, was to take stock of recent developments in Pakistan’s relations with India, Afghanistan, China and Iran, and assess opportunities for renewed regional engagement in light of geopolitical challenges.

Participants at the roundtable appreciated the United Kingdom’s role as an important strategic partner in South Asia. They observed that policy in London favoured engagement with Beijing, and as China’s economy expanded, new synergies were likely to be found between the two countries – particularly in service industries. Decision makers in the UK understood the interlinkage between stability in South Asia and Pakistan’s progress, and hoped that the Pak-China Economic Corridor (CPEC) would be a lynchpin of a more stable and interconnected region. Participants at the roundtable regretted statements made by Indian policymakers against the planned corridor’s geographical route. It was stated that the UK was keen to expand the Chequers process between Pakistan, Afghanistan and the UK, if the need arises.

On the regional front, participants observed that there had been no follow-up to Indian Foreign Secretary Jaishankar’s ‘SAARC Yatra’ in early 2015, or indeed his meeting with Pakistani Foreign Secretary Aizaz Chaudhry in Islamabad in March. Participants observed that breaking the Indo-Pak logjam needed a demonstration of Indian leadership and decisive foreign policy, however, celebrating a ‘war carnival’ made it unclear where PM Modi was headed with foreign policy on Pakistan. His recent statements against Pakistan in Bangladesh reflected New Delhi’s provocative posturing, which had slowly undone any optimism surrounding the Foreign Secretaries’ meeting in March. With the Line of Control (LoC)ceasefire not holding any longer, participants saw both strategic indifference to the prospect of reconciliation by New Delhi and renewed use of sub-conventional warfare. Participants agreed that hinging the Indo-Pak dialogue process on the Lakhvi trial was a mistake. There was also speculation about the impact of Indian war-mongering on the civil-military divide in Pakistan, and some participants stated that the gulf between hawks and doves had widened as a result of mounting public hostility from across the border.

Participants also observed that PM Modi was sidestepping the bilateral route – his telephone call to PM Nawaz Sharif for Ramzan greetings was one among a string of phone calls to Muslim leaders, and should not be read as a foreign policy initiative on Pakistan. Given that major political parties in Pakistan across the spectrum were all keenly sensitive to the idea of normalizing ties with India, participants observed that Modi’s hard conditionality for peace was working chiefly because the international environment was overwhelmingly favourable towards India.

Participants felt more optimistic about progress on the Pak-Afghan front and it was suggested that the United Kingdom could play a constructive role in key sectors of the bilateral relationship. Some felt that inspite of the mature diplomacy and leadership displayed after the Peshawar attack in December 2014, the initial confidence inspired by President Ashraf Ghani’s outreach towards Pakistan had begun to wane in the past few months. A deadly summer offensive in the north of Afghanistan was costing President Ghani increasing political capital, and each subsequent terrorist attack only seemed to strengthen Kabul’s anti-Pakistan lobby. On the subject of domestic militancy, a few participants believed that the issue of extremism and terrorism needed to be tackled decisively not for the sake of appeasing India, but rather to consolidate Pakistan’s own internal security situation.