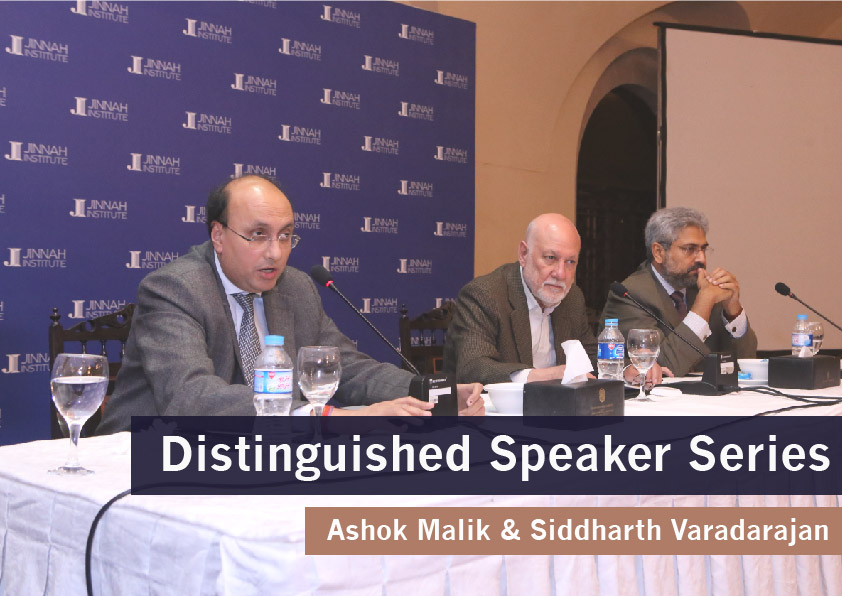 Islamabad, March 6, 2015: The Indian leadership realizes that engagement with Pakistan is better than no engagement, and Indian Foreign Secretary S. Jaishankar’s visit to Islamabad this week has set the stage for improved India-Pakistan ties. This was the takeaway assertion at Jinnah Institute’s Distinguished Speaker Series (DSS) organised at the Serena Islamabad on Friday.

The DSS is a long-running exchange of thought leaders between India and Pakistan, jointly managed by Jinnah Institute and Australia India Institute. The series has previously hosted Indian public intellectuals and policymakers including Mr. Shashi Tharoor, Mr. Wajahat Habibullah and Mr. Mani Shankar Aiyer in Islamabad. Speakers for the seventh DSS included Mr. Siddharth Varadarajan, former Editor of The Hindu and Senior Fellow at the Center for Public Affairs and Critical Theory, and Mr. Ashok Malik, a senior columnist and contributor for leading Indian publications.

In their respective comments, the two speakers agreed that while it would be unwise to carry unrealistic expectations on major breakthroughs in India-Pakistan relations, it was important to note that ordinary citizens on both sides of the border desired peace between the two neighbours. It was also noted that the Indian military shared the Indian civilian leadership’s views on pursuing peace with Pakistan. While both speakers agreed that India and Pakistan needed to discuss Kashmir, they also felt this was presently not a priority for the BJP-led government, given PM Modi’s preoccupation with a domestic agenda on economic reform.

Speaking about recent transformations in Indian politics, the speakers noted that while it was true the ‘Modi surge’ beginning in November 2013 had pushed the Congress to the sidelines of Indian politics, the Delhi election symbolised a huge loss for the BJP. It was true that military hardware formed one of the biggest chunks of India’s annual imports and Indian companies were likely to emerge as major defence players in coming years. However, the recent spike in defense spending was not inconsistent with recent budgetary trends, and should not be a source of undue alarm in Pakistan.

One area where the Modi government had been successful was foreign policy, and on assuming office Prime Minister Modi had embarked on a series of high-profile visits. While he had been lauded for his inaugural invitation to SAARC leaders, the promise of forward-movement in Indo-Pak relations had abruptly ended with New Delhi’s unilateral cancellation of Foreign Secretary-level talks last August. However, there was cognizance in India of the fact that Pakistan was fighting a difficult war on terrorism and both speakers asserted that India did not benefit from instability and terrorism in Pakistan.

Sharing his views on the performance of the Modi government since 2014, Mr. Siddharth Varadarajan said that PM Modi should be commended for increasing the BJP’s electoral vote share from 18 per cent in 2009 to 32 per cent in 2014. Significantly, India’s recent election had not been fought along communal lines. The support and backing of corporate India was also a key element in Prime Minister Modi’s rise to power, however one of Modi’s greatest challenges in proceeding ahead was mitigating social tensions while taking diverse constituencies ahead. The more Mr. Modi’s supporters pursued hardline Hindutva policies, the greater would be the chances of social disharmony in Indian society.

In his comments, Mr. Ashok Malik spoke about changing demographics and the youth dividend that characterised South Asian society. In sheer numbers, India had the largest working age population anywhere in the world, and 65 percent of India’s GDP was urban-centric. The rise of Prime Minister Modi had been enabled by the rise of a pan-Indian middle class that was increasingly thinking in macroeconomic terms, which in turn had created a bottom-up narrative of nationhood. However, delivering on jobs and employment was likely to remain a challenge for the government well until the end of the 2015-16 financial year. On the issue of India’s regional goals, one of the key thrusts of current foreign policy thinking was to bolster trade ties with SAARC member states. With Pakistan, trade and economic cooperation offered a clear pathway to peace, and would considerably help reverse negative perceptions in both countries.