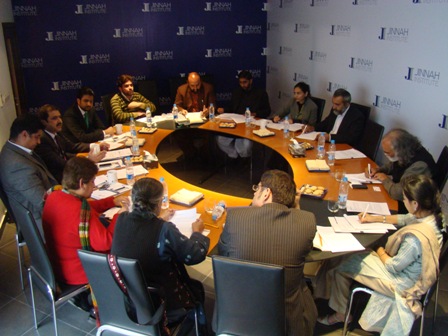 November 29, 2012 ISLAMABAD – Political parties in Pakistan need to be representative of all segments of society while formulating their manifestos, and also need rigorous internal monitoring mechanisms to evaluate progress on the promises contained within their documents. Parties also need to empower the youth by improving how they train and involve young Pakistanis in the political process beyond using them for mobilization during election cycles. This was the view of participants at a roundtable discussion organized by the Jinnah Institute in Islamabad.

Raza Rumi, director of policy and programs at the Jinnah Institute, opened the discussion by highlighting the importance of reviewing how parties develop their manifestos and then assess their performance based on them. Mr. Rumi also spoke about the importance of youth political activity, and how despite the shifting society and demographics, Pakistan’s political parties have held on to their outdated party organization and politics. “The country has moved on and the political parties should focus on reform and develop internal capacity for policy analysis”, said Mr Rumi.

Senator Tahir Mashhadi of the MQM said his party was rooted in the youth, and was originally a student organization. Most of itslegislators at the federal levels were members of its students organization in the past. Discussing the issue of manifesto development, Senator Mashhadi said that the MQM was committed to a democratic, secular, and successful Pakistan. “We are committed to achieving Jinnah’s Pakistan,” he said.

Kashif Chaudhry of the Jamaat-e-Islami, Asim Niazi of the PMLN and Farad Jarral of the People’s Youth Organization highlighted the processes their respective parties use for manifesto development as well as youth participation.

This was followed by a lively discussion focusing on the issues with manifestos as well as parties’ attitudes towards youth participation. Civil society activists and researchers asked party representatives about the issues they face on these issues. Party representatives admitted that there is a disconnect between a party’s central leadership and youth members and activists, which means there is no long-term incentive for young Pakistanis to remain productively involved in politics.

Sarwar Bari of the Free and Fair Election Network said that all segments of society, including the youth, need to be mainstreamed and not compartmentalized in wings. “When you create a wing, you marginalize. If you ask the women’s wings of the parties, the women there say that it’s not a good thing as we’ve been marginalized and not really involved,” he said.

Researchers Tahira Abdullah and Naheed Aziz raised the importance of women’s inclusion in manifesto committees and ensuring that  manifestos move beyond their current status   as wish-lists.

The participants concluded that there was a need for political parties to evaluate themselves critically on their performance and also involve independent experts in this process. Participants also agreed that parties need to develop future leaders by providing substantial opportunities to young people to participate in politics.