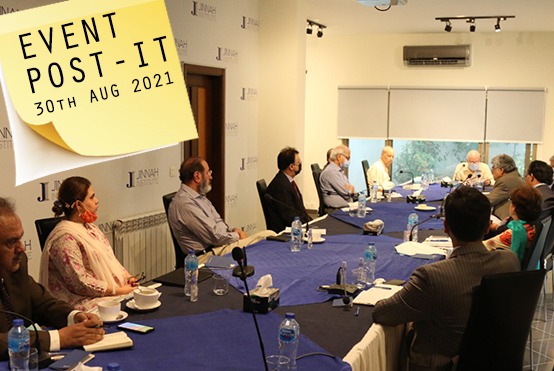 Taliban 2.0: What to expect from the Islamic Emirate?

Following the rushed departure of US troops from Kabul and the Taliban’s subsequent takeover of the national capital, the situation in Afghanistan has rapidly evolved, and will continue to present uncertainties that Afghanistan’s neighbours are looking at with a great deal of concern. The general amnesty announced by the Taliban; their vision of an inclusive government; the meagre resources available to run a state; the threat posed by spoilers; and the refugee challenge are among some of these considerations. How the international community and Pakistan should engage with Afghanistan hereon is being debated in national capitals across the world. To shed light on these and more, Jinnah Institute convened a roundtable with senior policy experts.

The Taliban’s amnesty has been seen as a tactical move. Experts observed that the conciliatory gesture towards opponents may not be temporary, and should be seen as an attempt to gain the confidence of citizens and the international community. The Taliban have enough political acumen to understand that obtaining international legitimacy is key to their survival as political players. They already enjoy de-facto recognition, and unlike the past, the Islamist group is not encumbered by the insecurity of 1990s. Experts cautioned that claims regarding the Taliban’s ideological transformation are unrealistic; the Taliban have a profound sense of validation after fighting a prolonged war and “defeating” a superpower. It is not enough to repeat that “these are not the Taliban of the 1990s” as it remains to be seen how they will act in government, especially with regard to women and minority groups. The amnesty could also be applied selectively, and news of the mass killings in Kandahar can be viewed as a manifestation of that.

Over the past week, the Taliban leadership has been consulting Afghan leaders—including former President Hamid Karzai and Dr. Abdullah Abdullah—and an announcement is imminent regarding the structure of their government. There has been a great deal of speculation over how inclusive the setup will be. Participants stated that it is easy to promise a representative setup, whereas achieving that in reality is an uphill task, especially with a considerable opposition. Ministerial portfolios could be given to former officials, as well as leaders of opposing factions to create a broad coalition that empowers ethnic groups as well. However, participants underscored that the main challenge was the governance of Afghanistan itself, in which the Taliban had meagre experience as a militia. The previous government led by Mullah Omar was “primitive” and cannot be used as a template for the Taliban’s current governance challenge.

The Taliban will certainly depend on external resourcing for running Afghanistan, but the same level of financial assistance as under the Karzai and Ghani governments should not be expected. Support from regional countries may be more forthcoming. The Taliban will have to inspire confidence in the international community if they are to forge relationships with new partners, and demonstrate an acceptable track record for the international community’s core asks on human rights. As for the international partners, participants saw it crucial for them to engage with the Taliban in order to avoid a repeat of events prior to 9/11. Participants stated that the US appeared to be coordinating its policy position directly with the Taliban, especially in the wake of the Kabul airport attack. The US leadership has been careful to not criticise the Taliban in their recent statements. The EU proscribed the Taliban as a terrorist group two decades ago, and it is yet to overcome this political dilemma. European states will most likely condition their recognition of the Taliban with guarantees on civil liberties, especially women rights.

Meanwhile, Moscow, Beijing and Tehran have shown considerable interest in engaging the Taliban. Participants identified Iran as a key player because of the contacts it has cultivated with a number of Taliban leaders over the years. Iran’s ability to transform its once-antagonistic relationship with the Taliban serves as a lesson for others in the region, they stated. The Taliban also appear to have found a willing partner in China, provided that the former upholds its promise of not allowing militant groups to operate from Afghanistan. There can be lucrative investment opportunities that make use of Afghanistan’s considerable mineral wealth, something Beijing can assist with once some semblance of stability returns to the country.

Some participants were skeptical about the extent of territorial control projected by the Taliban, considering the presence of groups like ISIS-K, TTP, and Al-Qaeda. They debated whether the Taliban will sever linkages with the TTP and Al-Qaeda, as such linkages allow obvious leverage and tactical support when required. The TTP has known ties with ISIS, so while the Taliban may not allow the militant group to operate freely, controlling them will certainly be a difficult task.

Participants discussed that Pakistan’s own policy regarding settlement of refugees had yet to be addressed in parliament. At this critical juncture, they felt it was necessary for decision makers to develop and project clear messaging from Islamabad.