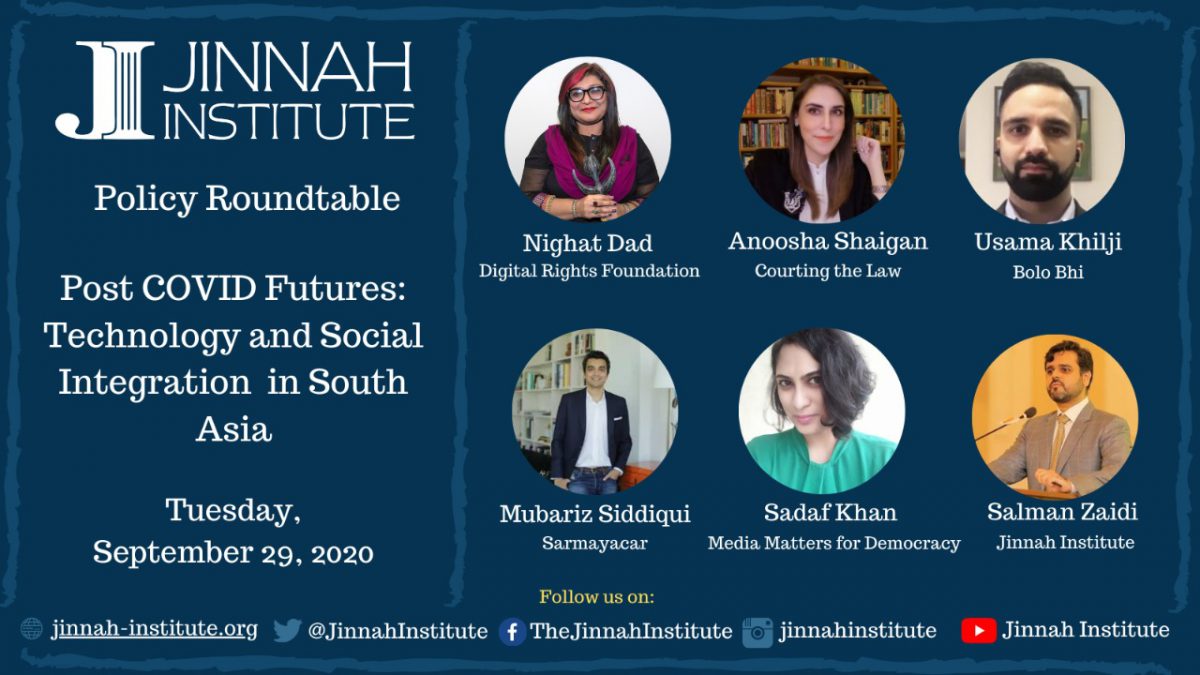 One of the big questions that we are confronted with today is the ability of technology to reinvent a South Asian future. “South Asia is considered to be one of the least integrated regions in the world”, stated Salman Zaidi, Program Director at Jinnah Institute. However there have been positive developments with regards to technology in both India and Pakistan over the past decade. These developments raise pertinent questions about the role technology can play in facilitating integration not just within Pakistan, but in South Asia as a whole. Ms. Nighat Dad acknowledged the role technology has played in opening up a world of opportunities for the youth in South Asia, but lamented the fact that there exists a disconnect in the tech ecosystem between the users and the regulators. She pointed out that arbitrary and oftentimes repressive measures taken by the regulatory authorities act as barriers to realising the full potential within the tech landscape. “The COVID-19 pandemic further highlighted the ingrained inequalities that exist in our society.” The rural urban divide when it comes to the access of internet in Pakistan was once again on display regarding the issue of online classes. She concluded by adding that it is not merely an issue of access, but also the shutdown of internet and mobile services that is experienced in various parts of the country.

Mr. Mubariz Siddiqui chimed in on the topic of the digital divide that exists in Pakistan by stating that the internet is still a relatively new phenomenon for a large segment of the Pakistani population. “It will take time for it to spread, and as the adoption rate increases, it is imperative that digital rights are guarded, which is essential if Pakistan wants to be integrated through technology in the region.” He also raised the issue of privacy rights, and explained that a significant number Pakistanis lack understanding of the fundamental right of privacy. The “I’ve got nothing to hide” attitude is an indicator that people are not aware of what an individual can stand to lose if their information is not secure.

The development of e-commerce was discussed and whether Pakistan at the moment is generating online transactions both in terms of volume and substance to utilize the potential of technology as an enabler. Ms. Anoosha Shaigan pointed out that since Pakistan is a common law country, it lacks a codified book of laws and is hence reliant on judicial decisions and interpretations. As a result of this, studies show that common law countries need additional assistance in terms of setting up an infrastructure for the regulation of e-commerce and cross-border transactions, especially when it comes to consumer protection. Regarding the volume of trade, Ms. Shaigan explained that the situation is not an ideal one, and that the lack of protection and dispute resolution mechanisms for sellers is a key issue. “As far as e-commerce is concerned, there is a lot more to be desired.” She further stressed that there is a need for accountability measures to ensure that e-commerce can grow to its full potential in Pakistan. “Progress has been slow, but we are getting there.”

All the panelists agreed that the government has a key role in using technology to provide digital solutions in the areas of governance and social protections. Mr. Usama Khilji explained that the government needs to do a lot more to incentivise people to use the internet for transactions. “There exists a distrust of the state and the banking system which needs to be addressed, and addressing this will require a lot of work.” He further added that there also exists the problem of a lack of media and digital literacy that prevents people from utilizing technology to its fullest potential. This issue is further compounded by the fact that education curricula in schools are not addressing this issue. Regarding the government’s approach on this issue, he stated that “the approach thus far has focused on over-regulation. There has been a critical lack of leadership on part of the government.”

On the subject of technology facilitating greater integration and innovation for the citizens of Pakistan, Ms. Sadaf Khan stated that it is hard to reach a definitive conclusion regarding how positive the impact of technology has been. “The experience has varied for the marginalised and for the privileged in Pakistan.” This was evident in how the education sector was impacted during COVID, and how accessing online classes was impossible for a large segment of Pakistani students. She stressed that it is crucial to take these inequalities into account when evaluating the role that technology has played. Moreover, to realise its full potential, it is imperative to address structural and cultural barriers, such as access for women, and the fear of surveillance in certain areas of the country. “Our inability to acknowledge these inequalities prevents us from understanding the issue at hand, which is something that technology on its own cannot remedy. We have to understand the power imbalances that affect people’s use of technology in ways that are different than just access.”

Regarding best practices in the region that Pakistan could emulate, Mr. Mubariz Siddiqui opined that Pakistan’s problems are unique, hence the solutions will have to be specific to its context. “When we talk about integration with South East Asia, it will be done on the basis of shared interest. Integration is cooperation, and most cooperation happens on an economic level.” He explained that there is a need to incentivize manufacturing, whether it is digital goods or technology being used to produce agricultural products. “We can only work together with other countries if we are also bringing something valuable to the table.”