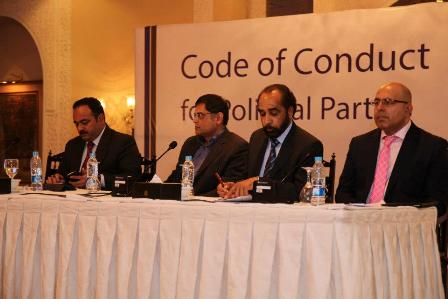 The Code of Conduct for Political Parties is a Significant Achievement

ISLAMABAD April 5, 2013 – It is a significant achievement for Pakistan’s democracy that political parties have agreed on a code of conduct for the upcoming elections, and it is crucial that they adhere to it to ensure free and fair polls. This was the opinion of participants at a seminar organized on Friday by the Jinnah Institute, with the support of the Asia Foundation, on the recently promulgated code of conduct for political parties.

Raza Rumi, Director Jinnah Institute, highlighted the importance of political parties acknowledging the importance of a code of conduct and agreeing on its provisions. “It is a significant achievement that the political parties themselves have agreed on a code of conduct, but the security climate prevailing in the country can threaten the prospects of holding free and fair elections,” he said.

The seminar was attended by politicians from various political parties, members of civil society, journalists and researchers, and was a culmination of the consultation process carried out across Pakistan on the code of conduct by the Jinnah Institute. Over 15 political parties participated in the nationwide consultations, and the recommendations and observations gathered from the exercise were passed on to relevant institutions, including the Election Commission of Pakistan, local authorities, political parties, and the caretaker government.

Gareth Aicken, the Asia Foundation’s country representative in Pakistan, said that it is a major achievement in the context of

Pakistan’s history that the recent National Assembly has completed its full term. Mr. Aicken added that the political parties now have a responsibility to adhere to the rules they have agreed on. “A successful transition now may build up trust in the democratic system of governance for generations to come,” he said.

Khawaja Izhar-ul-Hassan of the Muttahida Quami Movement (MQM) spoke about the importance of ensuring an even playing field for all political parties and stressed the need for institutions to not allow the marginalisation of any one party. Referring to the code of conduct, Hassan said that the MQM is orientating its candidates on the rules of the game. “We will ensure that all our candidates and members abide by the rules and regulations, added Mr. Hassan, while expressing concerns about security measures for the parties and their supporters.

Jan Achakzai of the Jamiat Ulema-e-Islam Fazl (JUIF) stressed the importance of facilitating women voters, and said that his party was committed to ensuring the implementation of the code of conduct. Mr. Jan also talked about the prevailing security conditions in Balochistan and FATA. “Voters particularly women will have serious problems accessing polling stations and the way out is to increase the number of polling stations”, Mr. Jan said.

Colonel Younus from the Pakistan Tehrik-e-Insaf (PTI) said that the process of scrutiny of candidates’ papers needs to be improved, with greater emphasis on establishing the financial integrity of contenders. He said that there are problems in the electoral process, for instance, respecting the limits prescribed for election expenditures and publicity campaigns. Mr. Younas recommended stringent mobile monitoring teams in order to curb blatant display of money.

Siddique-ul-Farooq of the Pakistan Muslim League-Nawaz (PMLN) said that the political process shows that the Pakistani nation is moving forward, despite problems, and highlighted the role of the media in helping strengthen democracy. Regarding the code of conduct, he said that it is a very positive sign that every political party supported the code but implementation remains a challenge. PMLN, he said, is holding regular briefings for its ticket holders regarding compliance with provisions of the code such as election expenditures, violence, security and facilities for women and elderly.

Afzal Khan, additional secretary of the Election Commission of Pakistan, also participated in the discussion, and highlighted the role of his organisation. Terming the forthcoming polls a historic moment for the nation, he said that much would depend on the parties for implementing the code. You cannot have free and fair elections, if parties don’t cooperate and fully respect the rules of the games. Urging the parties to develop internal capacity to undertake sustained orientation of members and candidates, Mr. Khan requested the political parties to help the commission in conducting peaceful and orderly elections.