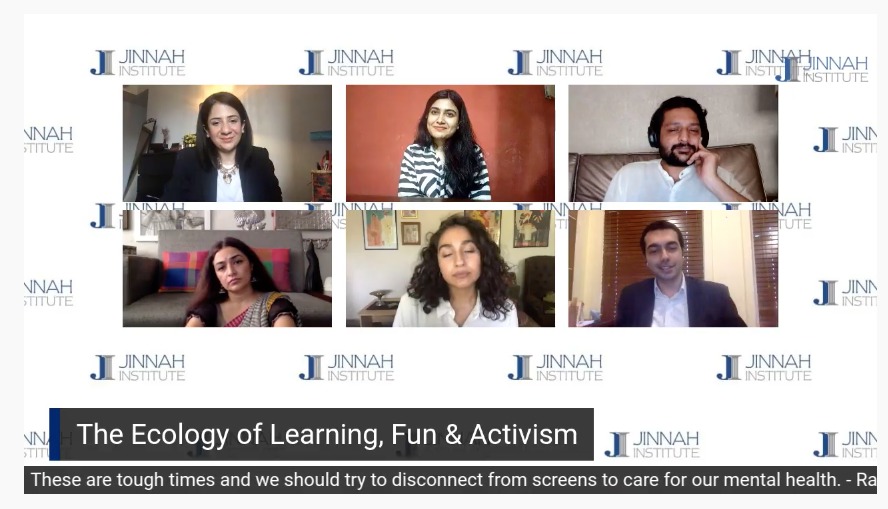 The Ecology of Learning, Fun and Activism

Participants discussed how the pandemic has changed the world around them. Ramsha Jahangir, a journalist working on digital privacy and technology, elaborated on challenges that have increased online with a barrage of misinformation and disinformation spreading all over the internet, amplified since the onset of coronavirus. Ms. Jahangir emphasised the need to disconnect for time periods, and to consume information from trusted sources when necessary.

She also identified problems that young people face with lockdowns and being restricted to home, particularly in the spheres of education and work. She stated that the two-fold challenge in connectivity – of access and affordability – were significant stumbling blocks against productivity for the youth in these challenging times.

Ms. Jahangir went on to discuss the use of digital tools as a means to rebel or raise one’s voice on issues. Digital technology is a very important means to amplify one’s voice, but she called it a “double-edged sword”, due to the threats it exposed young people to, in particular women. Trolling and abuse are common occurrences, and one could step back and choose to go offline if mental health was a concern.

Journalist and comedian Sabah Bano Malik also believed that a “tech detox” is necessary in the pandemic. She believed that one must take moments to completely switch off and not try and constantly consume information or knowledge.

When asked about expressing her opinions online and being on the receiving end of abuse as a result, Ms. Malik believed that online abuse is part and parcel of being a woman, especially when expressing opinions that might not be universally accepted. Combatting cultural norms would always lead to trolling and women being categorised as ‘good’ or ‘bad’, Ms Malik explained. She believed in using humour to get arguments across and also negate trolls whenever possible.

Mr. Ahmer Naqvi believed that dealing with issues such as natural disasters, terrorism and economic instability had hardened sections of the populace, making them better equipped to meet challenges posed by COVID-19. Speaking from his previous experience of creating a digital startup, Mr. Naqvi explained that regardless of the changed situation, entrepreneurial innovation in Pakistan has a dearth of investment in the technology sector, a challenge and a benefit simultaneously. The challenge is the lack of infrastructure, while the lack of strong competition could be advantageous to new entrants.

In his opinion, the biggest challenge however, is the fact that entrepreneurship is not innovating enough in the country. He said that our standards and goals for quality work are too low, and these need to be improved to develop better products.

When asked a question about financing a new business, and whether youth had access to sources of funding, Mr. Naqvi pointed out that financial streams in Pakistan are limited. Importantly, he also highlighted that privilege has a substantial role to play in determining whether financial capital could be acquired, in particular for ventures that were not digital.

Lawyer Asad Rahim Khan highlighted the importance of doing different things to safeguard one’s mental health during the pandemic. The significance of human connections and their role in keeping one grounded plays a key role in mitigating the psychological effects of restrictions imposed due to the onset of coronavirus and the changed world.

Mr. Khan also discussed the pitfalls of the legal profession for the younger generation. He explained that much like in other professional streams, new entrants into the legal fraternity are also hostage to their privilege. However, he argued against painting privilege with a broad brush because the idea was not simply centred on class stratification; as a woman in the field of law, one’s qualifications are often undermined by career assumptions. The recruitment practices of law firms in Pakistan are predicated on a utilitarian, zero-sum basis, where legal associates are only valued for the hours of work they can provide, not the quality.

Mr. Khan also identified how there is a growing division within the legal community as well, where on the one side there is a vast majority of lawyers, locally educated from one of the many law schools in Pakistan that do not focus on quality education. On the other hand, there are lawyers from privileged backgrounds, and they occupy the most space in higher tiers of the system; the two rarely interact or learn from one another.

Importantly, Mr. Asad Rahim Khan identified policy recommendations for the legal profession to improve the dispensation of justice and improve training for younger legal minds. He suggested that bar associations should play a greater role in regulating who enters the profession. Mr. Khan also mentioned the significance of mentorship programmes and how important it is for younger professionals to find encouragement and support.

Ms. Kaif Ghaznavi, a performing artist and teacher, spoke about how the pandemic affected her in a different way. With educational institutes closed down, students and teachers were scrambling to get their coursework in order to complete the term in any way possible. This allowed for an opportunity to truly assess solutions available for youth during this difficult period.

It is important to take education forward, but also safeguard mental health alongside, stated Ms. Ghaznavi. Teachers were no longer just educators, but also had to step in to provide counselling where possible. For students, this was a particularly challenging period, as all of a sudden, they had lost the ability to connect with friends and stay in touch with their support systems. The ability to “escape” at schools and universities, away from their domestic lives, was no longer possible, and even students that came for far-flung rural areas felt trapped.

Ms. Ghaznavi discussed how the pandemic allowed for reflection on the real problems affecting society. The importance of helping disadvantaged groups during the pandemic in ways that allow for income generation should be prioritised. Developing a skill or service-based industry during this time would help those that need it the most.

Additionally, the speakers also discussed ideas of striving for change, through demonstrations and movements. The conversation also addressed the ideas of resistance and whether the youth should engage in expressions of rebellion as a means to bring reform. They agreed that younger generations would, and often should rebel, as it could stand to bring about positive change. They also discussed ideas of inclusion and causes that unify versus those that might not.